At the end of June, Imagination Technologies unveiled their MIPS Series5 ‘Warrior’ architecture, featuring 32-bit and 64-bit CPU cores, with features such as hardware and software virtualization, and Extended Virtual Addressing (EVA). The company has recently announced the first member of the family with their MIPS P5600 CPU IP core.

The MIPS P5600 core is a 32-bit CPU IP that is said to offer 1.2 to 2x more system performance compared to proAptiv cores, and it supports peak frequencies above 2GHz on TSMC’s 28HPM process node. Performance-wise the core achieves 5 CoreMark/MHz and 3.5 DMIPS/MHz for a single core, which appears to be equivalent to ARM Cortex A15 according to values listed in Wikipedia and EEMBC Coremark results.

Up to 6 P5600 cores can be bundled together in a single cluster to form a multicore system with some other IP blocks including a coherence manager, 2 I/O Coherence Units (IOCU), … as shown in the diagram below. You can also add video and GPU IP cores to design a multimedia application processor. 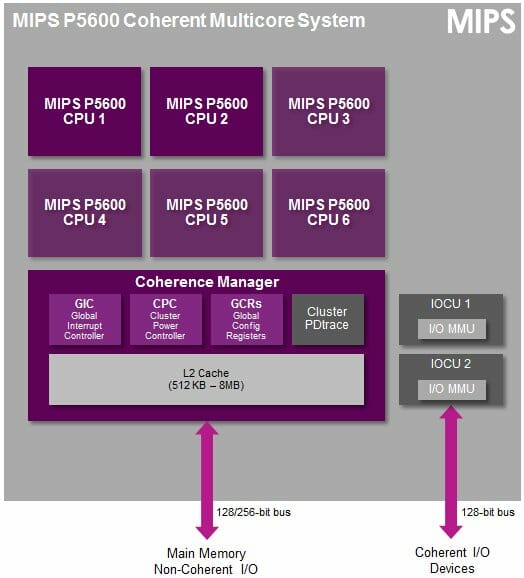 In case you wonder why they’re supporting 6 cores, and not just 4 or 8 cores like competitors, the following reason was given on Imagination Technologies blog:

A six-core cluster enables our partners to build a 4+2/4+1 solution where you have 4 cores running at maximum frequency for crunching down on demanding tasks and 2/1 cores clocked much lower to handle regular tasks. This enables a better scaling in performance while achieving obvious savings in power and area.

The first devices featuring this technology should start to become available in H1 2015.

I would prefer that chinese company like loongson, instead of imagtion technologies bought MIPS. They made more progress in MIPS IP than MIPS themselve, and their progress are no used by MIPS and ST microelectronics MIPS compatible cores. But the worst, is seeing, what is Imagination Technologies philosophy with their awfull PowerVR. A fully closed world, with bad architecture and drivers. 🙁