Broadcom and STMicro has the two companies that dominate the set-top box SoC market with respectively 44.7% and 34% market share by revenue in 2012, followed by Ali, a distant third at 6.9%. Other companies include Entropic, who has acquired Trident Systems, (4.4%) and Sigma Designs (1.4%) which has suffered in recent years. MIPS was the predominant architecture in the STB SoC market, but with the advent of Android, most companies have announced ARM based STB SoC for better compatibility with Android apps. TV Connect 2014, an event gathering stokeholder involved in Connected TV such as STB manufacturers, content providers, and SoC vendors, took place on March 18-20 in London, and Charbax, armdevices.net, interviewed three companies who promoted their latest ARM based STB SoCs:

Sigma Desigms SMP8756 was announced at CES 2014. It is part of the company’s new SMP8750 series SoC, supports 4K2K and HEVC, broadcast TS processing, secure media processing, multi-format Full-HD video decoding, VXP display processing and certification of CAS technologies (Verimatrix and Nagravision) are planned. Sigma previous secure media processors, which are still in used in new design today, were all based on MIPS, and this is their first ARM based SoC. SMP8734 is a least powerful version without support for 4K.

Android and Linux SDKs are both available. The Android SDK is based on Android 4.2 with support for OpenMAX, OpenGL ES 2.0, DVB software stacks, and hybrid STB API for support for tuners and demodulators. DTV middleware stacks and IPTV middleware ports, such as Netgem middleware for IPTV & VoD and OpenTV. Hardware reference platform are also available.

In the video below, we can see SMP8734 Vantage reference platform running Android, as well as SMP8756 showing 4K2K decoding and playback. 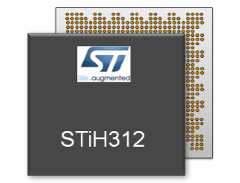 You can find limited information on STiH312 and STiH412 products page. The video itself has limited interested, but here’s the link if you want to find out more.

Entropic EN7310 features one to four ARM Cortex A9 cores, a Mali-400 GPU, and is designed for satellite STBS with dual DVB-S/S2 cable reception capability, MoCa 2.0 support, HEVC decode up to 1080p60, and DRM. They also have EN730x family for cable, satellite, and IPTV that’s designed for Hybrid STBs, but it’s not shown in the videos.

In the video we’ll find an HDMI stick and a development board based on EN7310, as well as Eagle Kingdom Technologies (EKT) DCP5205 (5:10 in the video), a nice and small set-top box (based on EM730x?) that you can plug directly into your wall socket (no power adapter, no power cable) with a connector for cable, HDMI output, and Wi-Fi that comes with an RF remote. The box runs Solid TV middleware. It’s a full STB, still a prototype, and should hit the market later this year.

Let it be DisplayPort, or at least fully utilize those HDMI 1.4a (2.0 still MIA) standard, ports.

I believe that Sigma Designs’s NDA (Non Disclosure Agreements) and TOU (Terms Of Use) for their their SDK and code libraries are still way too restrictive for use by free and open source software. At least previous I think it that is the reason that they still do not support any FOSS media player like XBMC yet. I think that Sigma Designs would be much more interesting SOC hardware if they fully supported XBMC, and now if they will expose OpenMAX IL hardware acceleration on VPU via Android’s new standard MediaCodec API then that should hopefully be possible. http://developer.android.com/reference/android/media/MediaCodec.html Funny… Read more »

Argh. Does anyone else find Charbox annoying?
He doesn’t seem to know what he’s talking about half the time and ends up asking pointless questions that the interviewees just seem baffled by.
Case in point, in the Entropic video, Charbox doesn’t understand the difference between ‘open standards’ and ‘open source’. Really?
How can this guy run a tech blog?

Back on topic.
It’s good to see the STB chip manufacturers giving ARM some love.
As someone who has tried to get DVB running on various ARM systems it can be very hit and miss. Mainly miss.
Hopefully some of there work re drivers will filter back to the community and make things easier.

The Cageybee :
As someone who has tried to get DVB running on various ARM systems it can be very hit and miss. Mainly miss.
Hopefully some of there work re drivers will filter back to the community and make things easier.

I still don’t get if this middleware supports android apps or not.
p.s. Cageybee your are not alone, it’s a pain.

@The Cageybee
LoL yeah Charbox comes off a bit mentally unstable, I’m not trying to be mean to the guy but there is definitely something wrong with him.

Sigma Designs actually commissioned some XBMC team people (Scott Davilla) to port XBMC to one of their MIPS chips a few years back so there is a Sigma video decoding pipeline in existence which theoretically could put it on a better playing field with Android where XBMC taps the Sigma hardware decoders bypassing libstatefright/mediacodec systems. This would put it in the same league as Amlogic which does the same but Sigma’s video decoders are still way better than most, Amlogic have closed the gap but Sigma still have an edge in that it will play almost everything even the oddball… Read more »

@The Cageybee
@Dan
He does lack some technical knowledge, but It might not be so easy to make live interviews.
However he’s the only one I know covering little known ARM SoCs, Chinese products… in English. So at the end of the day, what he does is great, even though some of the questions he asks may be confusing at times.

@Jean-Luc Aufranc (CNXSoft)
Agreed, he does seem to get about to shows that no one else covers.
Also, I certainly wouldn’t be able to do that sort of thing not in my native language.