This is not exactly an independent benchmark, as Intel provided the results showing an Intel Atom Z3580 SoC with PowerVR G6430  @ 533 MHz outperform a Snapdragon 801 with Adreno 330 GPU @ 578 MHz (Galaxy S5) in FutureMark’s 3DMark benchmark by 20997 to 18144, or a little over 15%.  We’ve seen several CPU benchmarks before where Intel often has a edge over ARM based solution, but the previous generation with Intel Graphics was a bit weak on the graphics side, and this test seems to confirm, the new Intel smartphone SoC should provide very good graphics performance. 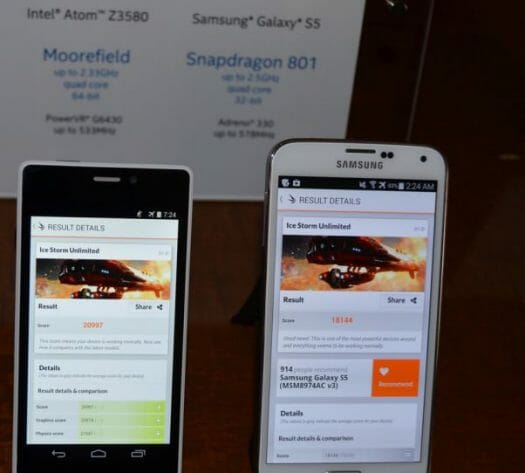 It appears Atom Z3580 might have also outperformed Snapdragon 805 with Adreno 420, as Anandtech reported an overall score of 19,698 in 3Dmarks with Qualcomm Snpadragon S805 mobile development platform (MDP), and noticed it was not the most GPU intensive test there is. So it’s still possible the higher score found on Intel’s smartphone reference design may be highly CPU bound, and more graphics benchmark are needed to really get a grasp on the upcoming Intel Moorefield 3D graphics performance.

Actual products based on Intel Merrifield and Moorefild SoC are expected to start shipping later this month. You can find more details and benchmarks results, released by Intel, for CPU and GPU on an earlier post about Intel Atom Z3460 & Z3480 (Merrifield) and Z3560 & Z3580 (Moorefield) Mobile SoCs.

Via Liliputing and Mobile Geeks

Just reached here and read your article after searching for Intel vs Qualcomm or Intel Smartphone. Well I prefer Intel on smartphone then Qualcomm. Last chip for smartphone by Intel I know is Trail+ i guess on lenovo K900 or Asus Zenfone 5. May I know when and in which brand, can we be able to see Intel’s Z3580.