AllWinner A80 octa-core big.LITTLE has been delayed several times, but it appears products based on the latest AllWinner application processor can finally be pre-ordered. One of them is Onda V989,  an Android 4.4 tablet with a 9.7″ 2048 x 1536 pixel display, 2GB RAM and 32GB flash, that’s supposed to reach over 48,000 in Antutu, but actually gets a little over 32,000 points in Antutu X. 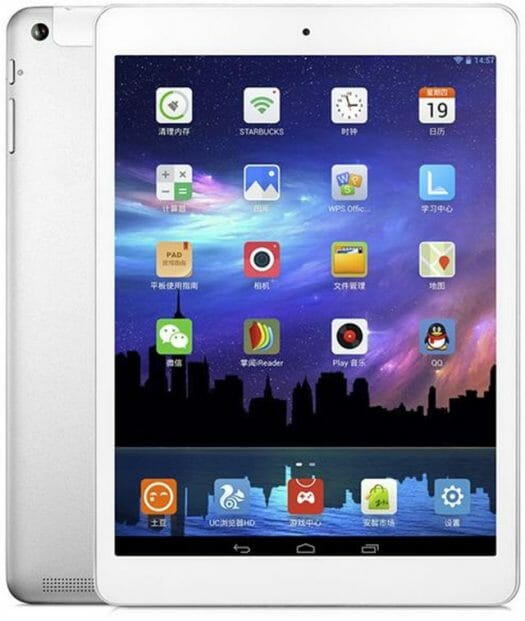 The tablet is said to sell with a USB cable, the power adapter, and a user’s manual. Beside being one of the most powerful processor on the market, AllWinner A80 is supposed to support 5 operating systems: Android, Ubuntu, Chrome/Chromium OS, Firefox OS, and Windows RT which should make it a nice candidate to try out various OS and play around, albeit a tablet does not provide the most hacker friendly form factor there is.

Pandawill pre-sells Onda V989 tablet for $239.99, Geekbuying for $229.99, and “onda-tablet”, which may or may not be the official store, pre-ells it for $219.99, but without shipping. It’s also available on several Aliexpress sellers. The tablet is expected to ship on July 31. The company already sold 500 beta tablets in China for 999 CNY (~$161) yesterday, and the regular price will be 1099 CNY (~$177) according to my sources in AllWinner. You may be able to find some more information on Onda V989 product page (in Chinese), including two firmware versions for V1 and V2 tablets…?

Thanks to Marius for the tip.

>>>and “onda-tablet”, which may or may not be the official store

It is not the official store. Onda sells via Tmall, Taobao, and Jingdong. People outside of China generally have to use a middleman reseller.

I’m really looking forward to the TV boxes now, those are much more hacker friendly and should arrive in a few weeks now that the first tablet appeared.
I notices the tablet is the first one to come out with the new Chinese SOC. This probably makes sense as there’s more money to be made with the tablet and the competition si probably more intense with tablets.

Some updates from the beta tablets on Mike’s blog: http://mikecanex.wordpress.com/2014/07/18/onda-v989-updated-user-report-benchmarks-and-videos/

Windows RT. How would you go about getting Windows RT for this tablet?

Cnxsoft,about mikecanex blog,can you find more about this onda tablet,benchmarks, if the antutu application is optimized for big little, about the CPU showing armv7 not A15,the real true GHz and how we know if allwinner and onda are saying the true

@rafael duarte
It’s all beta, so it may evolve before final release by the end of the month…

@Kent
AllWinner A80 SoC will be support Windows RT according to AllWinner, but you’d need a license, and it’s also closed source to you can’t simply modify it to port it on a specific hardware, and I can understand this would need Microsoft to be involved. So It’s unlikely you can just install Windows RT on Onda V989. I know you can install Windows 8 on some Intel based Android tablet, so with ARM it’s still a little more complicated…

@rafael duarte
I can see Mike continues posting translations on the Chinese forums about V989, some people manage to get 60,000 in Antutu.. What kind of sorcery is that? 🙂