Earlier this week, I wrote about VolksPC mini PC running Debian and Android simultaneously, and the developers decided to send me a unit for testing. The hardware I received is the popular MK808 mini PC based on Rockchip RK3066 with 1Gb RAM, and 8 GB RAM, but loaded with MicroXwin unified distribution. MicroXwin is an implementation of Windows X that’s not using a client/server protocol, for instead communicates directly with the drivers for better performance, especially on low-end hardware.

I connected MK808 to my HDMI TV, added a USB hub to connect a USB keyboard as well as Mele Air Mouse, and powered up the device. The boot to Debian takes about 30 seconds, and 50 seconds for Android.

As you boot it will enter in Debian with XFCE desktop environment, and you’ll notice two files, namely the Quick Start Guide and Release Notes that explain how to get started and configure the system. All configuration is done in Android, where you can configure the network, language and input, and date and time. The release notes provides the login credentials desktop/desktop and root/root in case you need them, explains how to start and start Android from a terminal window in Debian (stop  zygote / start  zygote), and lists some known bugs. To switch between Android and Debian, press Ctrl+Alt+F7, and as you’ll see in the video below, it’s truly instantaneous.

Both operating systems share the same file system, so you can edit files in Debian, and use them in Android, and vice versa. However, I’ve noticed some directories and files may become invisible in Android, such as the Pictures and Documents directory in the user’s directory (/mwinx/home/desktop). For some reasons, I have not been able to login to a SAMBA share in ES File Explorer although a scan can find my server, and plugging in a USB card reader will crash Debian, and sometimes reboot the system. From time to time, I may also lose control of the USB keyboard, and Wi-Fi disconnects pretty often, so stability is not that great with that firmware.

However, I’m been pleased with the performance in both Debian and Android. Programs such as LibreOffice Writer, and Chromium browser both load under 10 seconds in Debian, and the system feels more responsive that I would expect from such hardware. I wanted to install es2gears and glmark2-es2 to test hardware GPU acceleration, but the packages normally used (mesa-utils-extra & glmark2-es2) could not been found by apt-get. 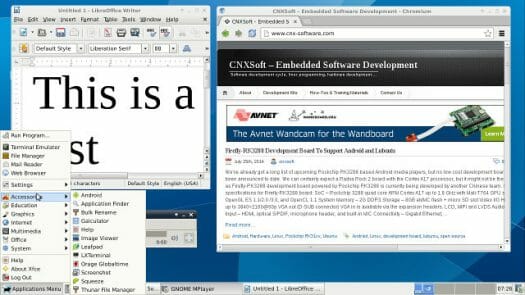 Back in Android, I’ve tried several apps (ES File Explorer, Google Play, Youtube..), also including games such as Buggy Beach Blitz, and they all work as expected. Running Antutu 4.x benchmark gives a score of 10521 points, which seems about right for a dual core processor with Mali-400MP4 GPU. If you start playing a Youtube Video in Android, and switch to Debian, the video still plays in the background and you can hear the audio. This means for example, that you can start playing music in Android, and work in Debian, or start a task in one OS, and it will still run, if you switch to the other one.

You can watch the video below to check out he boot time for Debian and Android,  the speed of the switch between Android and Debian, Wi-Fi disconnecting, and the loading times of LibreOffice and Chromium.

I’ve also run a few commands in a terminal windows to check memory and storage:

It’s running an older 3.0.36+ as is common with RK30xx and RK31xx based devices, about 853 MB total RAM is available to the system, and df -h does not work because /etc/fstab is empty.

The take away from my testing is that this unified distribution has great promise, as performance is good, and I did not encounter display issues, but some serious work needs to be done to debug the whole system, as well as improve its stability. It’s not entirely clear however, whether the stability issues are related to microXwin implementation, or the underlying Android firmware for MK808.

Sounds great; hope they port it to newer processors where it could be really zippy…

It would be nice to have a x86 version, i mean archlinux/android-x86_64

Can they make this work for RK3188 and hopefully RK3288 in future?
What about GPU acceleration and VPU decoding?
Does XBMC works with 1080p videos in linux version?

I hope so. Using ARM processors, I don’t see why it couldn’t end up on a smartphone that could easily be a Bring Your Own Device option that could replace a lot of issued laptops and desktops in a work environment.

From what I’m seeing as of late, Windows as the only option for business computing is no longer true. There are true low cost and diverse options available.

Hi Jean-Luc Aufranc, The MK808 has known WiFi hardware issues. If you Google “MK808 Wifi poblems” you will see several comments. Also if system is rebooting when you insert a card reader it my be because you are drawing too much current from the power supply. So please use a powered hub or a power supply that can source more current. For our final hardware we are using a Android TV Box with Wifi Antennae, Ethernet and multiple USB ports. It will also run at 1.4Ghz vs 1.2Ghz on the MK808. We will take a look at Samba issues that… Read more »

Murat :
Can they make this work for RK3188 and hopefully RK3288 in future?
What about GPU acceleration and VPU decoding?
Does XBMC works with 1080p videos in linux version?

Rockchip do toooo much memcopy
hw is good, but sw isn’t.
We can hope for better openmax drivers (zero-copy with dma-buf) samsung and qualcomm use it for some times

@Murat
You’d have to switch to Android to use XBMC. So 720p output with this device, but if they run on more recent hardware it should work OK.

@Vasant Kanchan
Fair point with regards to USB card reader. I did not see the power supply provided with MK808 was just 5V/1A, this is probably the explanation.