There are now many wireless display adapters supporting Miracast, EZCast, DLNA, Airplay…, and streaming videos from your smartphone to the TV over Wi-Fi in 720p or 1080p resolution. Qualcomm recently unveiled a prototype called “4K Stream Adapter (4SA)” that does about the same but instead support 4K UHD resolution, and allegedly supports LTE thanks to its Qualcomm Snapdragon 800+ processor. 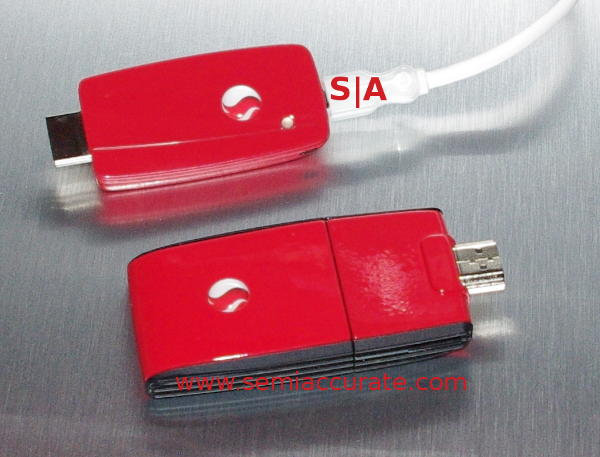 According to a PCWorld report, Qualcomm mainly expects the device to be used to stream 4K video captured with a phone to a 4k UHD television, but it might also ending up supporting online video services such as Netflix, and mirroring your mobile device’s display onto the big screen. It’s also said to use a “basic Universal Plug and Play protocol” to connect with other devices, and the company is working to support communication with media apps such as BubbleUPnP, VLC and MXPlayer. Currently 4SA is only a prototype to demonstrate its capabilities to hardware OEM/ODM and software companies.

SemiAccurate also mentions the device supports LTE, and while it’s unlikely consumer ever use LTE to stream 4K video at home, it could be used in location where other network connectivity are not available, for example for digital signage players in remote locations. The player would probably download content over LTE, store it in a large enough flash, and play the content for a while, instead of simply continuously streaming content due to cost considerations.