Tronsmart Orion R68 is an Android 5.1 TV box powered by Rockchip RK3368 octa core ARM Cortex A53 processor with 1 or 2GB RAM, and 8 or 16GB eMMC flash depending on model, most probably based on Beelink i68 hardware. The goods news is that the company has now released the stock firmware as well as the Android SDK for the device. 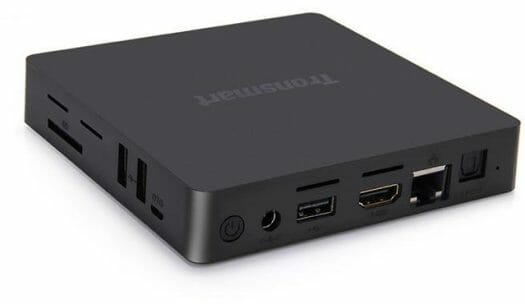 In case you need to flash the firmware manually, you’ll need a Windows PC, a toothpick and a micro USB cable, and download Updating_instruction&Drivers&Flashing_Tools.zip which contains instructions, and the latest version of two Windows based utilities:

If OTA is working, you would normally not need to use these, unless somehow your device got into troubles, and you may have to reflash the firmware.

You should probably run Driver Assistant first to make sure you are the right drivers, then run Factory Tool to load the firmware, click Run. You’d then have to connect a micro USB to USB cable between your computer and the device, insert the toothpick into the pinhole on the right of the S/PDIF, connect the power, and after a few seconds release the button pressed with the toothpick. The instructions are actually quite similar as RK3288 firmware update instructions, except the Windows program changed a little bit.

Tronsmart previously released the Android SDK for some of their devices such as Orion R28 or Draco H3, but the SDK was not always useful, with some cases where the SDK would build, but miss all bug fixed for the last 2 months, and in others, it was incomplete, and would not build at all. By the way, a link to the latest Draco H3 SDK (Allwinner H3) was provided yesterday, so hopefully it’s complete this time.

Orion R68 SDK (r68_tronsmart_0711.tgz) is a 10GB compressed file and is apparently dated July 11, 2015, so hopefully it should both be complete and not that different from the July 20 firmware. I have not been able to try it out yet, as the download from Mediafire is rather slow tonight.

@Jean-Luc Aufranc (CNXSoft)
I downloaded this SDK last night. Seems complete. Kernel src 3.10.79, Android 5.1.1. And you were right, it is Nexteon SDK, Tronsmart branded. Did not compile it or test it ’cause I don’t have device. Kernel is left prebuilt there (kernel.img exists), which is dated 11 July.

@Stane1983
So there is no kernel folder or am I missing something?
Then what’s the point of this SDK.
There are no documentation/apps as with the RK3188/RK3288 SDK’s.
Without git history, how will anyone know what is inside the firmware, how a change was made etc?
Then people can forget about bug fixes or custom firmware for RK3368 devices at least on Nexteon devices for the time being.

Do anyone know if this SDK can be used to build for RK3288 devices, as I see Mali T760 files also there?

@dewet
I said kernel src (source) is 3.10.79. I also said (maybe misunderstood) that prebuilt kernel image (kernel.img inside kernel source folder) dates July 11th. I didn’t try to compile fw from source. I never did some serious work on any of rockchip sdk-s so I can’t tell much about it. But from device trees I think there’s no 3288 device configs.

Also, when it comes to git history, you’re right.

I just checked http://git.linux-rockchip.org/ and saw that there’s rk312x_android5.1_sdk repository. Diff should be useful to see what was changed on generic sdk…

@Stane1983
OK, Thanks
Can you maybe only upload kernel folder in tar gz file or to github?
I think the file I downloaded is corrupted and it will take several hours to download the whole thing again.

Better way to get Linux and Android SDK for RK3368 is now to use GeekBox github account: https://github.com/geekboxzone