There are already some flexible Bluetooth keyboards that you can roll into your bag or pocket after being done typing on your smartphone or tablet, but LG is about to launch Rolly Keyboard, a solid Bluetooth keyboard for mobile device that can be rolled into a stick, which should may be sturdier than flexible keyboards, and it can also hold a smartphone or tablet in upright position with a display of up to 10″ in size. 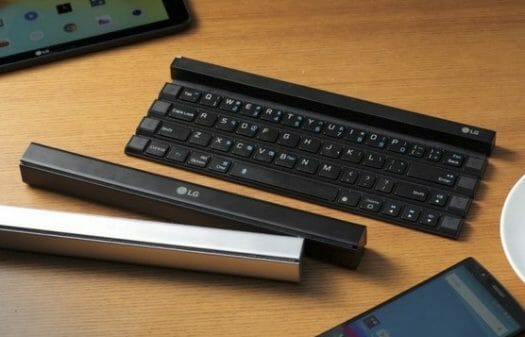 LG’ latest keyboard (model KBB-700) is comprised of 17mm keys – a standard keyboard comes with 18mm keys – arranged into four rows, that can be folded into a stick as shown above. The company also claims the keyboard offers “satisfying tactile feedback not found on flexible silicone keyboards”.

The Rolly Keyboard will be unveiled at IFA 2015, and start selling in September in the United States, and soon followed by “key markets” in Europe, Latin America and Asia in Q4 2015. LG did not disclosed pricing nor availability.

That sounds like a nice concept.
i hope it doesn’t bend further than “flat”, so you can place it on your lap and type without too much hassle

LG just continues to think that making different designs (even if they are totally useless) makes them better. firstly they put the volume buttons on the back of the phone and Now this. Who the hell needs a foldable keyboard ?
May be you can use it as a keyboard and a stick for fighting 🙂

Interesting idea, and you can get used to almost anything, but do these small-keyboard designers ever actually use physical keyboards to type? – key pitch isn’t really good enough. It’s all well and good reducing the total size a few mm, but as soon as this is not standard it’s pretty much just another piece of junk. – cursor key layout sux – common but silly for some of the most often used keys on any keyboard. no page up/down at all? – apostrophe (it appears), hyphen, and escape on fn keys is probably the worst thing. – no numbers,… Read more »

page up/down? – you can scroll with your fingers
mistery square key? – probably home button
Fn key – probably to enter “numbers” mode – you do have numbers, just need to press Fn
those rubber ends – looks to me they are no rubber, but maybe magnets to keep it folded in stick position. it would have been interesting to add some movable bits on the think part (think like a swiss army knife) that open up and stick to the magnets and keep the keyboard flat then opened.