After having a look at ARNU Box Mach 10 Pure Linux earlier today, I’ll move on to its little brother ARNU Box Mach Q featuring an Amlogic S805 processor with support for H.265 video playback at Full HD. I’ll start by listing the specs, then I’ll take a few pictures, and finally check the board.

The box runs Linux and Kodi 15 Isengard with the company’s Cloudword installer that will fetch and install add-ons specific to your country.

ARNU Box Mach Q is sent in the usual black package from the company. 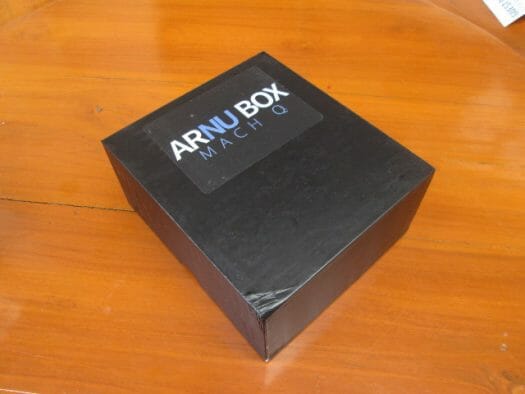 The media player comes with an IR remote control requiring two AAA batteries, an HDMI cable, a 5V/2A power adapter, and a user’s manual in English for both Linux and Android versions of the box.

The box is made of the same material as Mach 10, and appears to be of good quality. The front panel features status and network LEDs, and a window for the IR receiver, the side has a micro SD slot, and two USB 2.0 host port, and the front panel comes with the WiFi antenna, AV and HDMI video ouputs, Ethernet, optical S/PDIF, and the power jack.

The model is actually refered to as S805a on the back of the case. Please note the MAC Address prefix (04:E6:76) looks up to AMPAK Technology, the company that provides the WiFi module… 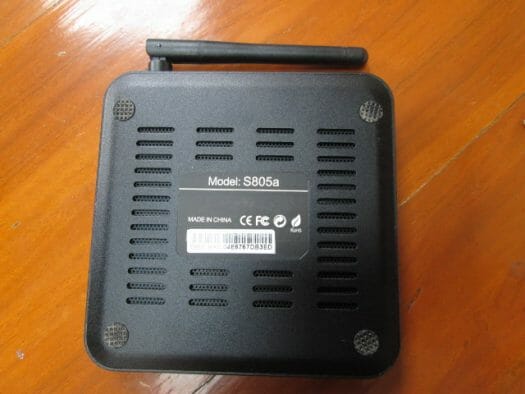 I had to take off the sticky rubber pads, and loosen four screws, before inserting a tool in one of the ventilation and pull firmly to open the box. 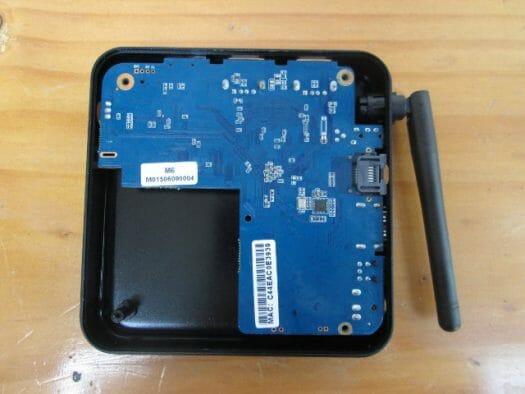 The board is named M6, which I have not seen in other hardware platform I have tested. However, you may have noticed that the MAC Address sticker refers to a different MAC Address with prefix C4:4E:AC (for Ethernet), looking up to the usual Shenzhen Shiningworth Technology. The small chip “IC+ IP101GR” is a Fast Ethernet transceiver.

There aren’t any screws holding up the board to the case so it’s easy to just take it out for further inspection. A gray “sponge” attached to the top of the case is used to dissipate heat from the Amlogic processor. Ampak AP6210 is a 2.4GHz 802.11 b/g/n + Bluetooth WiFi module, two Samsung K4B4G1646Q-HYK0 DDR3L chips are used to get 1GB RAM, and a Micron 29F64G08CBABA NAND flash provides 8GB storage.

I’d like to thanks Theater in a Box for providing ARNU Box Mach 10 and Mach Q samples for review. ARNU Box Mach Q Pure Linux can be purchased for $99.99 on their site, or $109.99 + shipping on Amazon US.

Good one Harley, and yes Armada now ARNU is all about piracy and nothing else, and at high price.

funny price – no thanks! better option to buy beelink mxq for $50 – openelec/android in one

That was real funny Harley.
Why would anyone bother with Kodi if it wasn’t for the illegal piracy addons?

Nothing can take over RaspberryPi 2 + Kodi, HDMI CEC works out of the box and Full HD is enough for general purpose usage.

Finally we can change simple TV panel into thing called “Torrent TV” when we can download BitTorrent directly to RaspberryPi and ready to browse and play on TV using TV remote control itself. Google Cast also ready to serve from any smart phone or tablet via Youtube Plugin.

Awesome! Arnu are really ahead of the game when it comes to Linux on amlogic. I’d like to see any other amlogic box get Kodi 15 running on a Linux fw.
@rytec, where is the support for beelink mxq? I doubt you’ll be seeing much openelec development for that hardware in the coming year.

Bobber, all AMLogic devices MX, S8xx support OpenELEC which is Kodi on Linux 😀

@Joe Bucks
I for one use Kodi without any video/audio addons at all as I only use local media.