3D Televisions have not been very successful since their market launch, but with the advance of virtual reality kits, 3D video could make a comeback. If you want to record your own 3D videos, you’d need a 3D camcorder with most models now discontinued. A cheaper and possibly more convenient solution would be to use your smartphone with an extra camera connected to your smartphone’s USB OTG or USB C port, and that’s exactly what Weeview Eye-Plug W9 is doing for around $40 in Taiwan. 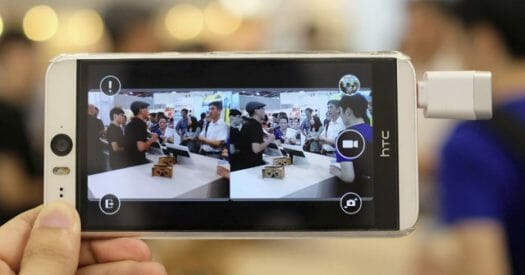 The app then leverages the rear or front-facing camera (the thing can rotate) of your smartphone, and create a 3D video by combining the two videos from the phone’s camera, and Eye-Plug into a single video. The downside is that resolution is limited to 0.3 MP (VGA) because of the USB 2.0 interface, but an upcoming version with USB type C support will be able to handle 1080p 3D videos. The solution is also said to require a fast processor, but the micro USB OTG 2.0 VGA dongle has been found to work fine with phones such as Samsung Note 4 (Qualcomm Snapdragon 805 or Exynos 5433) and Note 5 (Exynos 7420 Octa) confirmed to work well. Since it will take two pictures, it also supports refocusing of pictures between the foreground and background even after a picture is taken.

You can watch the Charbax’ interview of the company at Computex 2016.

crap… why not integrate two cameras and record to flash? then copy to phone over usb or wifi

How much it will cost for two screams? How to fix two screams with suitable distance for getting good 3D performance? Do you think about them?

@TC
Most probably for cost reasons. They now use a simple camera, and relies on the smartphone to do all processing. If They made a dongle with two cameras and a video encoder, it would have cost much more.

but VGA is totally pointless. and even with the HD-version,
they use a camera which is totally different from phone’s in angle, sensivity, color, dynamic range…
yeah they use algorithms to compensate for that but it will never be more than a gimmick