We already have a choice of Android TV boxes with digital TV tuners (DVB-T2, DVB-S2, ATSC…) with devices like K1 Plus T2 S2, U4 Quad Hybrid, and Wetek Play 2, but Ferguson, a company based in Poland, has two other options based on Amlogic S905 processors with their Ariva 4K and Ariva 4K Combo with one or two tuners, a Pay TV card reader which is not available on competitors’ models, and 2.5″ HDD bay in the bottom of the case implemented via a USB 2.0 to SATA bridge.

The device runs Android 5.1, and ships with RCU660 universal IR remote control, and an instruction manual available in English, German, Polish, and Spain.

Usually, I don’t even look at the user manual since it’s normally useless, but Ferguson put a lot of efforts and details in their 42 pages manual, so it might be useful. If you can read Polish there’s also a Wiki. They also have a YouTube account explaining how to configure their devices, for example using USALS when you have a motorized satellite dish that can handle multiple satellite as shown below.

Ferguson Ariva 4K Android TV boxes can be bought on Satshop.tv for 179 Euros, and 189 Euros for the Combo version including VAT. You’ll also find some more details on Ferguson website.

@theguyuk
I’m a little confused by this too, and it might actually be a mistake.
WeTek had been delaying the Amlogic S905 STB due to a bug with 4K HEVC DVB videos, that was eventually fixed with Amlogic S905 Rev. C. So if the specs are correct, Ferguson is selling DVB box with Rev. B that’s known to be buggy (artifacts) with 4K H.265 DVB streams. That’d be really odd. I’ll ask them.

thank you nice information.
The kii pro what revision have?

@theguyuk
@anotherone
Ferguson has a S905-B processor as shown in the pic below. I have never seen it before. 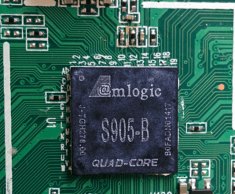 They told me the exact version is Amlogic S905-B r0p4. So it must be even newer than the Rev. C chip mentioned by WeTek.

B and H are “versions”, and there are also “revisions” not shown on the chip. Since Rev C has been outed many months ago, I’m pretty confident the problem with 4K DVB stream is fixed on all new devices.

where to find proper video to check if ferguson have hevc bug?

where to find proper video to check if ferguson have dvb bug?

@Jean-Luc Aufranc (CNXSoft)
Thank you for the informative quick reply.

A bit pricey. Are there any Android boxes with dual DVB-T2 tuners?

i have this box with me.

Are there any “cheap/good” dvb-t2 usb sticks for android boxes without tuner?

Ferguson links do not works,any idea how to find user guide?

@The Cageybee
Not that I am aware of. If you want one for recording while watching another, you may have to wait for Amlogic S905D boxes.

@anotherone
They are some DVB sticks for Android, but mostly made for smartphones and relying on a custom app -> http://www.cnx-software.com/2013/05/26/geniatech-pt115m-and-pt115e-usb-dvb-t-sticks-let-you-watch-digital-tv-on-tablets-and-mini-pcs/

If you install openELEC/LibreELEC, you’ll have more choices for USB DTV sticks.

Too bad there are still no TV tuner software for Android that supports acting like a proper PVR backend server service/deamon for Kodi’s PVR API.

This means that there is still no possible to watch Live TV inside Kodi (XBMC) using the integrated TV tuner when running Android OS.

@Harley
I have tried recording a video stream in Kodi while watching it and that works, addon saved it as a flv file. The add-on has to support record.

So I suspect either no Android interest in PVR or Android gets in the way, lack of driver support maybe?

@Harley
For this particular Ariva 4K Combo there is a nice try to bulid full funcional LibreELEC. When community will handel LNB drivers it would be all about bug fix “only”. More info here: http://forum.satkurier.pl/topic/16565-ferguson-ariva-4kariva-4k-combo/page-18#entry1190307

Next shitty box from ferguson, very poor support for their devices.

With the bug they should have some artifacts from time to time. But I’m now pretty sure the box have a processor with the latest revision. I was just confused because I never saw Amlogic 905-B processor before.