We’ve seen in the past at last two projects development CPU cards aimed for easy upgrade a replacement, starting with EOMA-68 standard currently with products based on ARM processors and mostly targeting the consumer market, followed more recently by Intel Compute Card that focuses on the smart devices and enterprise markets. But I’ve recently found out a third company has been doing pluggable CPU cards for a little while: Arnouse Digital Device Corporation (ADDC) with their BioDigitalPC cards designed for the military and small businesses, and pluggable into desktop docks, phones, all-in-one monitors, and even portable datacenters that fit into a suitcase. The company also has “reader boards” that you can integrate into your own products / enclosures. Everything is shown in the diagram below. 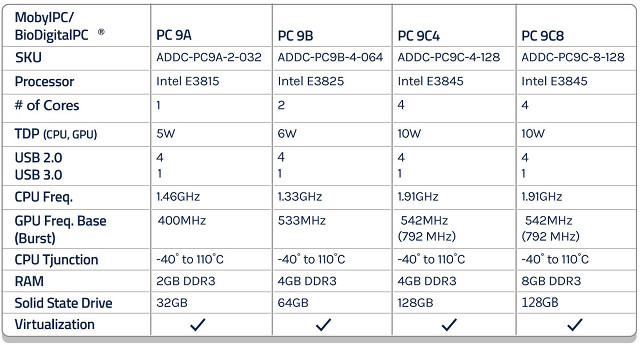 The cards have roughly the dimensions of a business card (84×54 mm) and 6.5mm thickness. The cards can run any x86 operating system including Windows, Windows Server, LINUX, CentOS, RHEL, Ubuntu and others, and are hot pluggable. They also have a waterproof, dustproof, fire-resistant and rugged epoxy coating, can be purchased in commercial and industrial operating temperatures, and can withstand about 3,000G.

Pricing makes it 100% clear the solutions are not designed for the consumer market, as BioDigitalPC Gen 9 cards sell for $580 and up starting with the single core version, and the Mobyl Data Center 22 shown above goes for $88,000 with four military grade batteries, a 9.7″ display, 22 GbE cards, and a rugged Pelican Storm case, but without any BioDigitalPC cards. You’ll find the full details and price list on ADDC website.