Qualcomm is the leader in baseband processors used for cellular communications in smartphones and other products, and one way the company has become a leader is by leveraging its patents, by either forcing customer to first “purchase a license to standard-essential patents, including elevated royalties that the customer must pay when using a competitor’s processor”,  “refusing to license its cellular standard-essential patents to competitors”, or “entering exclusivity dealing arrangements” with companies such as Apple. At least that’s according to a complaint brought by the Federal Trade Commission (FTC) in the US that accuses Qualcomm of maintaining a monopoly and using unfair methods of competition, violating the company’s commitment to license on a FRAND (fair, reasonable and non-discriminatory) basis . 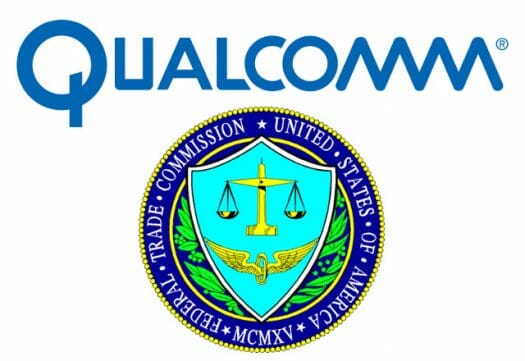 The license requirements may explain why smaller companies have a hard time making Qualcomm based products, although this may have  improved with the partnership with Allwinner, and the launch of Qualcomm Snapdragon 410E & 610E SoCs that can be purchased easily from distributors. Bigger companies not wanting to work with smaller ones is actually pretty common, but it’s usually because they want to focus their resources, or the salesman is not interested because his commission would not be large enough.  The alleged anti-competition claims and high royalties may also explain why you still have to pay around $40 to $50 for an LTE USB stick.

However, note that the decision to launch a complaint from the FTC was not unanimous, as while two FTC commissioners voted for it, one voted against, and submitted a written statement explaining that it was “an enforcement action based on a flawed legal theory (including a standalone Section 5 count) that lacks economic and evidentiary support, that was brought on the eve of a new presidential administration, and that, by its mere issuance, will undermine U.S. intellectual property rights in Asia and worldwide”. Qualcomm also issued their own response as one would expect, where they express their belief that “the complaint is based on a flawed legal theory, a lack of economic support and significant misconceptions about the mobile technology industry”. We’ll have to find out how this turns out.

Thanks to Jon for the tip, via Arstechnica

Qualcomm is one of the worst patent troll. They glorify software patents.

“Despite the objections, this is hardly the first time Qualcomm has found itself in hot water over its licensing activities. Only a few weeks ago, authorities in South Korea fined it 1.03 trillion Won ($883 million) for violating the country’s competition laws. And in 2015, it agreed to pay a $975 million fine in China for similar infractions. (See Qualcomm to Appeal $865M Fine by South Korea’s Fair Trade Commission and Qualcomm to Pay $975M in China Antitrust Spat.)” Qualcomm receives $8.1B per year in royalty fees. —- Do some math – over the twenty year course of these patents… Read more »

Another problem with gatekeeper patents is that consumers can be forced to buy the same license over and over. A typical phone carries a patent licensing load of about $35. So if you buy a new phone every two years over the course of a 20 year patent you will be buying ten licenses to those patents. Forcing consumers to keep buying the same license over and over yields immense profits. For example at one point I had 27 Windows licenses on the wall of my office to illustrate how Microsoft was forcing me to continuously repurchase the same license… Read more »

Qualcomm paid too much into the trump campaign fund?

Good to know Qualcomm fu*** everyone, big and small.

@Jon: It’s “pop music” economics, most patents wield nothing while a few – for little to no rational reason – go on to become huge hits and make billions to the label. It’s completely detached from technical merit.

JM : Good to know Qualcomm fu*** everyone, big and small. @Jon: It’s “pop music” economics, most patents wield nothing while a few – for little to no rational reason – go on to become huge hits and make billions to the label. It’s completely detached from technical merit. There is a common reason for these ‘hit’ patents – they become part of a standardized, widespread technology. And that’s why we have FRAND licensing. If I was in change I’d take a very different approach to licensing radios. I would use the proceeds from spectrum auctions to purchase the patents… Read more »