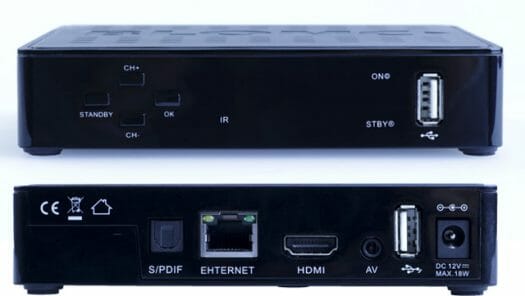 The company informed me that BLOMC ONEC and ONES models are also coming with respectively a cable and satellite tuner. You’ll find the firmware for the box on the company website’s software page, which is upgradeable via USB mass storage. The video below explains the simple procedure to configure the box to connected to your Stalker portal.

BLOMC ONE can be purchased for €57,02 on JASAT Multimedia website. However, while searching for a 667 MHZ CPU with LQFP144 package, I found the box is also known as Maxytec i100, compatible with both Stalker and Xtream Codes, and a Maxytec i100 S2 model already includes a DVB-S2 tuner. If you already own one of those Stalker compatible STBs, you should be able to watch IPTV on other devices with StalkerTV Android app or Kodi together with the Stalker Client add-on.

@theguyuk
That one is the Maxitech i100 I mention at the end of the post.

FYI; there is also a Stalker Middleware client available for Kodi / XBMC

This enables you to use Kodi’s PVR interface (including EPG GUI) for Stalker Middleware.

So FYI you just run Kodi on a Raspberry Pi as a Stalker Middleware as client with this addon.

Kodi does not only run on a Raspberry Pi

So this is just another “high end” ( usually you get 8 MB flash and 64/128 MB RAM) satellite receiver sold here for more than double the Alibaba/ AliExpress price ! Don’t think this model can run Kodi, but can certainly run various “Open” distro updates of Enigma2 ( Linux JeOS for satellite TV) with one of those Sly GUIs ( clones of the official Sky Broadcasting interface) that also run IPTV with Stalker and other middleware. Still cheaper than those Android Boxes with DVB-S2, but hey why not buy from Ali at half price? Just search for ” satellite… Read more »

We are a company that provides boxes for maxytech, it is an oem (original equipment manufacture). We provide our boxes with the brand name of every customer.

would you have firmware for Maxytec 5G?

Have you asked them? http://maxytec.net/index.html#products

@parrotgeek1
Oh.. At first, I thought it might be one of my typos, but it’s the marking on the box 🙂

@Jean-Luc Aufranc (CNXSoft) Here is a cheaper version from AliExpress; 2nd one cheaper still in volume from Alibaba: 2016 Mini DVB S2 Ordinary Free IPTV Satellite TV Receiver Support Wifi Biss Key 1080P HD Standard DVB-S2 Set top Box https://www.aliexpress.com/item/2016-Mini-DVB-S2-Ordinary-Free-IPTV-Satellite-TV-Receiver-Support-Wifi-Biss-Key-1080P-HD/32750498346.html Or, https://m.alibaba.com/product/60135040076/Low-Cost-Mini-HD-DVB-S2.html Admittedly the AliExpress one has less RAM and flash, but for same price minus WiFi dongle you can get a 1 GB RAM with 8 MB flash model ! And it is unclear what the specs for the $34 ” MAG” box are, a favorite omission online. A lot of these boxes are based on the Sunplus or… Read more »

@Athar Thanks. I had seen it, but it was not clear whether that cheaper box would support Stalker from the Aliexpress page. But you seem to know what you are talking about, so I trust you 🙂 By the way I had to edit the links in your post. I usually delete post with Aliexpress shortcode links since they are often used by spammers, and it’s not ideal to copy/paste a Google redirect link. “Google search link fix” add-on for Firefox, CHrome, and Opera prevent the latter by copying the actual URL -> https://github.com/palant/searchlinkfix I’m using it with Firefox on… Read more »

@Jean-Luc Aufranc (CNXSoft) I read the link fix GitHub but don’t think I can install this on my Firephone that runs CM11 (Android 4.4.4.) Anyway appreciate your​ pointing out the link paste issue. So is there a better way to paste links on Android phones? I rarely use my desktop since the phone is so convenient, and have also started using the Fire Tablet 7″ bought from Amazon Warehouse for $30 ( used) mainly to play YouTube and other videos. This can take CM12 (Android 5.1, as I read online.) Btw, not all these satellite receivers will run Stalker, but… Read more »

hello you know how to reset this box, start bios? thank you

@Athar
Google Search link fix is available as an add-on for Chrome, Opera and Firefox, so if you are using any of them then I’d assume it should work. For other browser, I don’t know whether a solution exists.

with xtream codes works only through stalker API …. but very soon Xtream codes will have proprietary api and middleware with their own boxes … and only infomir mag , e2 and xtream codes own box will be supported 🙂

i think i download a wrong software on blomc one,,,and now not get any picture,,anyone can help about this please?? any recovery software we can put on usb switch on the box and fix this problem?? thanks

No Way, a jtag flashing would be needed…but also then..you need the right “pin’s” being attached…no other solution and the producer will not tell you, based on my experiences…