Exynos i T200 is an ARM Cortex R4 + Cortex M0 WiSoC for the Internet of Things, potentially used in the Samsung ARTIK-053 IoT module, and the first Exynos IoT processor from Samsung. The company has just announced that mass production had started, so let’s have a closer look at the processor’s features. 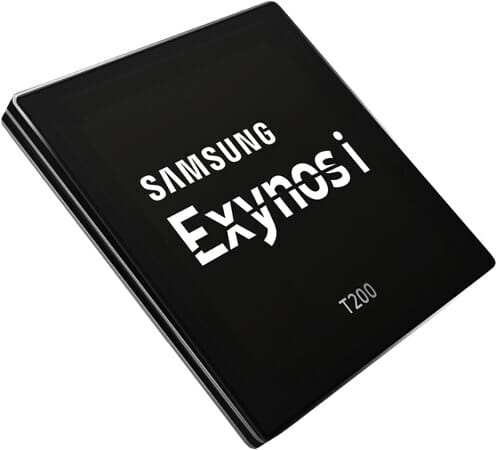 The Cortex R4 core is used for system control, and the Cortex M0+ core for I/O and LED control. Cortex M0+ core is normally used to save power, and runs tasks that do not require high performance, so the maximum operating frequency is likely much lower than the 320 MHz listed in the specs.

Samsung further states that the processor is Wi-Fi CERTIFIED from the Wi-Fi Alliance, and Microsoft Azure Certified for IoT. Exynos i T200 also natively supports IoTivity IoT protocol enabling interoperability between IoT devices. You may find a few more details on Exynos i T200 product page.

@Jean-Luc Aufranc (CNXSoft), Looks like this 2012 article claimed 250MHz on a 90nm process. So, five years later 320 MHz could be possible with tuning–or a better process.

At least for power-switches at home I think low latency is super important.

@Harley
You think a few ms are really going to make a difference? Also, I would think the the power saving DTIM (etc.) would add way more latency that the difference between n and ac.

@willmore
Good find, but even if it was possible, ARM Cortex M0+ are normally used for low power application, to offer long battery life, so boosting the frequency that high would not make sense.