For the final day of this giveaway week, I’ll send Khadas Vim Pro development board to a new home. The board is powered by an Amlogic S905X processor coupled with 2GB RAM and 16GB storage, features 10/100M Ethernet and 802.11ac WiFi, and support 4K video playback and output via its HDMI 2.0a port.

The board supports various operating systems such as Android, LibreELEC, dual boot Android/Ubuntu, etc.. and I wrote a Ubuntu review / getting started guide for the board in February. At the time, the image was still “raw” with many steps to perform by the users, and part of the documentation needing to be worked on. But the company (Szwesion) and members of the community are usually active in resolving user issues on the forums. 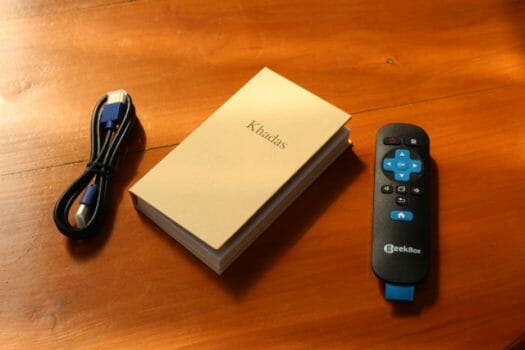 I’ll give away the kit I’ve received with the board in an acrylic case, a USB to USB type C cable for power, a HDMI cable, and an IR remote control.

Khadas Vim Pro is sold on GearBest for $57.99 shipped. If you want something more powerful or feature-rich, Khadas Vim2 board is another option with Amlogic S912, GbE, better 802.11ac WiFi, and more.

btw, mainline linux is *almost* entirely working on this board

However, progress has slowed down to a crawl since the release of the Khadas Vim2. They really don’t have the manpower to support 2 platforms (they were struggling with just one platform as-is). I’ll poke them on the forums and see if they can finish things.

In for a Khadas !

I’ve been eyeing this sbc for a while now but couldn’t find a good distributor. Would obviously be nice to win it here, but apart from that, where do people buy this from, Gearbest excluded? I’ve had less than good experience with Gearbest.

Count me in ….
It looks like a good SBC

I would like to have this board to test out, thanks

Count me in
Eric

I want it! I could unleash my RPi from media center.

Put my ticket in the fishbowl

Well tried many times but never won anything here

I”m in. fingers crossed. thanks!

I’d love one of these to replace my ageing r-pi 2 general hack-about board. Thanks.

Count me in. Thanks.

also want one for test bts

Hope I am lucky – This is a nice board

I would love Khadas board

A nice board to play with, I’m in.

A decent mini computer to play with, I’m in.

Count me in. Nice looking board!

Hope I win this.

I’ve raspberry pi2 SBC, I need more SBC to experiment as media player for my 4k TV.
Count me in .
I need one khadas vim2 board.

Would love to play with the Vim – count me in!

Count me in! Thanks in advance for the opportunity.

Thank you for this giveaway!

Looks nice, count me in.

I need win it!

I really need this board.

Pls count me. Thank you.

I am in too…for khadas

i don’t pass for this one!

In for the sbc

Hoping to get this board

have a nice day to eveyone

I think I could give this a good home. 😉

Put my name in the virtual hat.

Thank you and have a nice day.

I’m in. Just ordered the rpi3 but this one seems much better at video playback

Count me in for this one

Yay! Count me in!

The giveaways keep getting better!

Count me in please. Thanks

cnx you are awesome!

It will be perfect gift for me

That’s a neat little board count me in.

Hope to win at least this time

Hope I win, thanks!

Would make a nice mediaplayer for our living room 😉

Count me in too, regards

I want this so much!!

Count me in as well

Count me in.
Thanks.

Can I have one pretty please?

Okay, i can use this.

please count me in as well, thanks.

i’m in, this board is awsome!

I’d love to have it!

Count me in pls

I need on!
Please

Thanks for the giveaway! You are the man!

Good luck to all and a big thank you to CNX!

Count me in please, thanks.

Count me in please, thanks.

I’m in with pleasure

Ready to receive it 🙂

Lets give it a try

Count me in, please!

Would be great to have one.

Me too!
CNXSoft rules!

Count me in, please.

This is exactly what I need :3

Looks like a great engine for my self-balancing personal assistant

Lets try this one too

The S905X is still missing in my (small) collection

I could use it…

Please add me to a draw. Thanks.

I have never seen this many comments on a CNX story … That being said, I want me one of these

I’m in too. :fingerscrossed:

Wow last but most certainly not least

Would love to check out a 2gb dev board. Sounds very interesting. Thanks!

Please, count me in. Thank you!

Well I hope I win this one 😉

thank you for the opportunity to win

let also give it a try i’m also in

Please, count me in. Thank you!