A month ago, I wrote about a $10 self-powered thermometer display that connects to your shower header and can display the water temperature near real-time to help with mixing hot and cold water tap to achieve the perfect temperature.

It’s not really useful where I live, but I was hoping somebody would buy one, and crack it open to find out how it works. It turns out MickMake has done just that even bringing an oscilloscope in the shower… 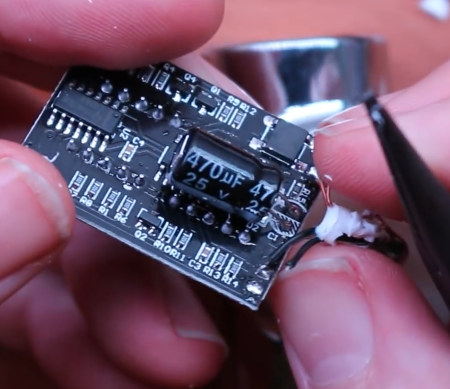 If you just want to use the thing, the good news is that it appears to work well, and temperature is displayed within less than one second after turning the tap, and goes up as hot/warm water goes through it.

Now for the teardown… It does not seem that easy to open it, but he managed, and found a 470 uF capacitor, LS164 8-bit shift register for the LCD display, ABS6 bridge rectifier, and another chip that’s blank but should be the MCU handling the job of getting temperature and displaying it on the display.

Time for shower with Ikascope oscilloscope to get waveforms from the rectifier which outputs 2.44V with low water flow, and up to 4.57V with high water flow.

He went back to the bench, and found on the pin with a nice squared signal (clock). The next step will be to reverse engineer the other pins, and replace the unknown MCU with an ESP8266 WiSoC to make it a wireless shower temperature display… I got the information above from MickMake’s mailbag video below with the relevant part starting at the 7:30  mark.

@Mario
Sadly, the turbine only produces around 6-10mA. I’ve also semi-identified the chip to be a PIC, which updates the display at 10Hz.
An ESP8266 just pulls too much current on power-up. So, looking at something like an nRF52. I *could* use a coin cell for the ESP, but the aim is to not have to worry about batteries.