USB expansion drives and multi-bay NAS devices are both very common form of storage which have different applications, but I had never thought or seen multi-bay USB expansion drivers until I came across ORICO NS200U3 “2-bay USB 3.0 hard drive dock” on GearBest (~$82) that can handle two 3.5″ hard drives.

This piqued my interest, so I went to ORICO website looking for models supporting more hard drives, and found ORICO 1088USJ3, a 10-bay USB 3.0 to SATA enclosure that can provide up to 80TB of local storage with 8TB drives. 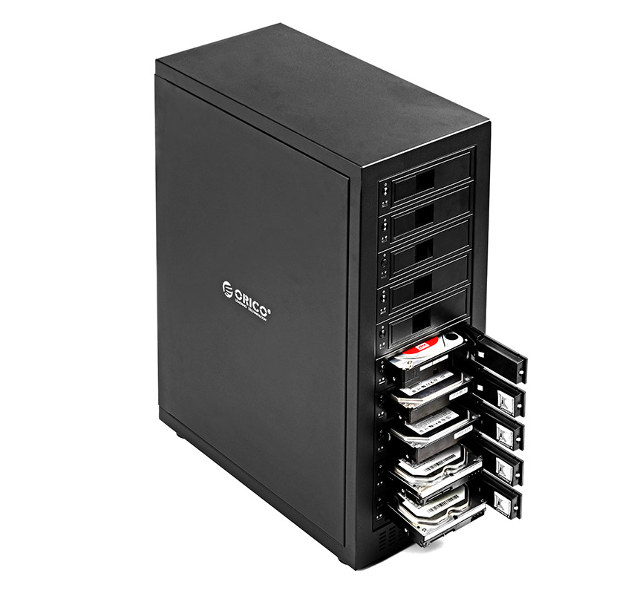 The box is said to work with Mac OS, Linux, Unix, and Windows 98 and above, which should be expected since it will likely be seen as a normal USB mass storage system from the operating systems side. You won’t need any tools to install the drives, and hot swapping is said to be supported.

The system implements “Intelligent Dormancy” which decreases heat and wear of hard drives, and saves energy.

That’s a fairly old product since it was announced in 2013, but I only noticed it now. Yet, I could not find any reviews of the 10-bay model, and I don’t know if it is seen as a single drive while connected, and whether it supports RAID or not. One of the 5-bay models appear to be more popular, and it’s easier to find reviews such as the one below for ORICO 9558U3 model, and we’ll see each drive is seen independently by the system. If you’re using a Linux computer or board, you should be able to use LVM to show all drives as one.

There’s another 5-Bay model (9558RU3) with switches on the back used to configure RAID.

The 10-bay model is pretty hard to buy now, and may even be discontinued, but you’ll find ORICO 9558U3 5-bay DAS (Direct Access Storage) for $159 and up on Amazon US, eBay, Aliexpress, and others. ORICO is not the only game in town, and TerraMaster D5-300C 4-bay enclosure with a USB type C connector is fairly popular on Amazon and sold for $229.99. Users’ reviews are usually positive, but there are a few complains about noise, performance, and power supply.

Don’t waste your time watching this ‘review’, the Dude who put this on Youtube is clueless like hell (constantly talking about RAID being some sort of backup which couldn’t be more wrong) and there’s zero information provided. Only information at all in the comments section where people warn about this device (category). For anyone out there thinking about buying such insane devices (USB DAS): think about that you at least need two of them since they are a huge so called ‘Single Point of Failure’ (SPoF). Once the controller inside dies you have no access to your data any more.… Read more »

i have a cheap startech usb 2.0/eSata 4 bay das with two 4tb drives in raid 1

bantoto masabo sigola : u might be thinking of drobo that use their own patented raid-like method No, I’m talking about any of these multi-disk USB boxes, especially those that advertise RAID-5. And no, I’m not talking about RAID-1 since I consider this in a home/SOHO environment a horribly inefficient waste of disks. It ‘protects’ from almost nothing while doubling costs and consumption. Last century there were some use cases for this mode existent but they all are related to availability (business continuity). I outlined my opinion why ‘traditional RAID-1′ is almost stupid for example over there: forum.openmediavault.org/index.php/Thread/18637-Home-NAS-build-FS-info/?postID=146935#post146935 (we have… Read more »

@tkaiser
If you run ICT business from home or even develop remotely, RAID is nice to have. But it won’t replace backups. It’s just a must for development environments where downtime is expensive.

@Jerry In practice, every time RAID runs unmonitored, you only discover the failure once it’s the second one and it’s too late. Most often you’ve lost a second disk in a RAID5 array and you discover that alerts didn’t work for whatever reason and the RAID controller did its job maintaining the array alive for you. So the downtime is reduced only when you detect the first fault. At least in the good old days of IDE, a faulty disk would most often hang the controller, letting you discover something was wrong. Also with todays capacities, it’s very common that… Read more »

willy :
Almost only RAID1 with 3 identical disks avoids all these issues since a new disk can be rebuilt from one of the two other ones without affecting read operations.

Since it’s 2018 now even with Linux a way better concept is relying on ZFS and using zmirrors combined to a single large pool: jrs-s.net/2015/02/06/zfs-you-should-use-mirror-vdevs-not-raidz/ (this scales up pretty well even with large array sizes and the more zmirrors you add the higher also the random IO performance). RAID1 when looking at the alternatives these days is sooo lame now…

@tkaiser Well, frankly I’ve stopped using out-of-tree FS drivers for servers a long time ago. It used to be too much of a pain to fix kernel bugs, having to deal with incompatibilities. I’ve used to run knfsd+reiserfs+raid on 2.2 when any two-combination of them was already not recommended 😉 Also, for having had to rebuild by hand a RAID5 array (writing equivalent code in C, reversing the on-disk format) a after a controller died, I really appreciate how easy it is to recover all your data from any disk using RAID1 without having to scratch your head too long.… Read more »

I did a video review about the 5 bay non-RAID variant a while back. Works well with most Intel chipsets and Linux. I created a 5x10TB array using ZFS (RAIDz2) and did a complete fill & scrub without any issues. Currently using 2 “in production” and they haven’t given me a problem in over a year of usage. I did notice some strange behaviour using Windows 10 on an AMD Ryzen system though, if you want to use something like that you’re probably better off looking for something with a bit newer chipset. Anyway, if anyone is interested, check out… Read more »

@Quindor
8 days scrubbing a RAIDz2 made of 5 x 10TB? Seriously? That’s IMO approximately 7 days too long. Which JMicron chipset is used inside? Do you get faked SMART data from the drives or real values?

tkaiser : @Quindor 8 days scrubbing a RAIDz2 made of 5 x 10TB? Seriously? That’s IMO approximately 7 days too long. Which JMicron chipset is used inside? Do you get faked SMART data from the drives or real values? It depends how you look at it. I didn’t need fast storage, just a lot of it. Filling ~30TB of netto space and then scrubbing the 50TB takes a long, long time. Yes directly connected this could be done (much) faster, but for the purpose of backup storage or a NAS, where the maximum speed is 100MB/sec (1Gbit) anyway, I don’t… Read more »

Quindor : Filling ~30TB of netto space and then scrubbing the 50TB takes a long, long time. And resilvering will then take even longer. This is the only thing I’m concerned about since usually people do RAID for a reason. They search protection from disks failing (most of those people now confusing data protection with availability but that’s another story). So once this happens and you replace a disk this will end up with most probably 10 full days of full stress for the remaining 4 disks. If the first disk died because of age then chances are great that… Read more »