Arduino UNO is one of the older Arduino boards, but also one of the most popular, and there are already many clones, which you can buy for as low as $3 shipped. But Malaysian based Cytron Technologies has decided to make their own Arduino UNO Compatible board, designed specially for students to learn coding and microcontroller, that brings some tweaks to the original design.

First, they’ve done away with the power jack, and instead went with a more convenient micro USB port for power. They also added an LED for each digital I/O, so students can easily see I/O activity, and finally included a piezo buzzer to play sounds or melodies, as well as a push button. 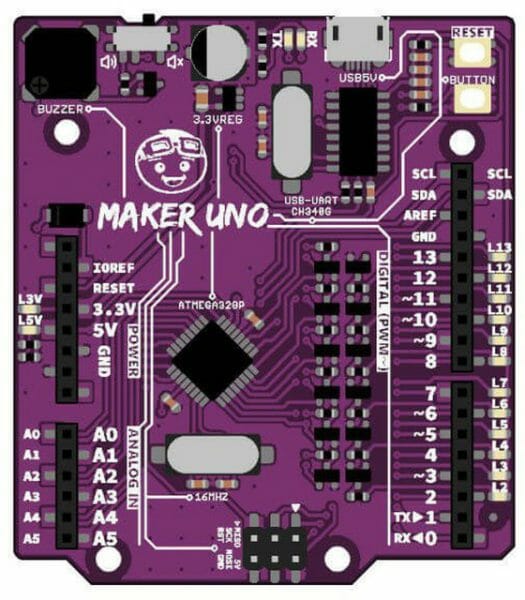 Since the board is compatible with Arduino UNO, you could just get started by downloading the official Arduino IDE on Arduino website, but the company has also written a bilingual guide (English, Malay) to help people get started with the board.

Maker UNO is sold for $6.00 on Tindie, but shipping adds $11.50 and up, so you’d have to buy a few to keep the unit price below $10. Alternatively, if you are based in Malaysia, Cytron Technologies sells it directly on their website for 26.5 MYR ($6.8 US) including local taxes with shipping free if you spend more than 100 MYR, or pick the board up in Penang. They also do oversea shipping, but it’s quite expensive since they only use DHL or Fedex.

Looks great for kids. No need for wiring to develop around the basic functions like blinking a series of LEDs or emitting funny sounds. This could help lowering the average arduino adoption age 😉

Question: How do you isolate all those LEDs hanging on the GPIO pins if you don’t want to use any (or all) of them? Answer: You can’t. The LEDs are driven via an N-Channel MOSFET, so in-essence the pin is DC isolated, but the LED is always there and will light as your input or output signals toggle, which always uses power. Not only that, but you are stuck with the MOSFET gate capacitance always hanging on the GPIO pin. What a shame. IMO a better/cheaper solution would have been to replace the MOSFET with a jumper which the user… Read more »

@Drone
For educational purposes, I consider these MOSFETs a benefit rather than a problem. “seeing” signals change both on inputs and outputs is quite instructive, helps during development, and even helps getting a sense of order of magnitude of timing (i.e. if you see it blink it’s far too slow).

@willy
OK Willy, I agree if this board is intended as a strictly controlled “Instructional” platform (e.g., classroom). But as a general-purpose board I think it would be better to take my suggestions and dump the MOSFETs and add jumpers. Or maybe make a different version that sells in parallel? I dunno. Up to you lah…

Price starts at $4 + shipping, with the later a little high if you don’t live in South East Asia.

Yup, it is meant for class room and for beginners. We did considered the constant power drain if the LED is activated and it may be activated in the pin are configured as input and the gate of mosfet pick up the floating noise.
All indicator LEDs are being series with a 10K resistor and Maker UNO is not designed for low power applications, it should be power from laptop or power bank 🙂
Anyway, thanks for the feedback and we will look seriously on all comments.

Guys, we know the international shipping cost is high, and we go out and search for alternative. We manage to get lower cost courier service, please check the campaign page again.