Ubuntu Touch looked really promising as a Linux mobile operating system supporting mobile desktop convergence, so eventually some people would have been able to use a single device for their mobile and desktop needs.

If was not for lack of trying, but sadly Canonical had to end the development of Ubuntu Touch due to lack of interest from phone manufacturers and the community at large, focusing their resources instead of the cloud and IoT.

But some people were still very enthousiastic about Ubuntu Touch, Unity and convergence, so since the code was open source, UBPorts continued working on Ubuntu Touch on their own.  UBPorts developers have now collaborated with Purism to make Ubuntu Touch one of the officially supported operating systems for the Librem 5 smartphone. 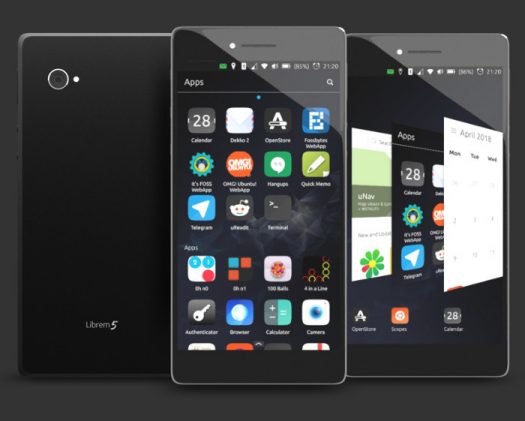 Librem 5 will still ship with GNOME based PureOS, but Purism will support customers who want to easily install Ubuntu Touch or PureOS with KDE Plasmas Mobile.

The community supported Ubuntu Touch ports now only work on Android phones such as Nexus 4 & 5 and as such, rely on Android drivers and libhybris to convert Linux system calls to Android ones. But Marius Gripsgård, founder and chairman of the board of UBports, notes that Librem 5 is the ideal hardware for Ubuntu Touch as it will not require an Android subsystem.

Librem 5 smartphone is expected to ship in January 2019, so we’ll have to wait until next year before a Linux based Ubuntu Touch smartphone ships to users, and shortly after become broadly available. You should even – optionally – be able to run Android apps on the phone.

How can a dead OS be “officially” supported?

I guess you will have to read the article to get that answer.