Air mice are remote controls including motion sensors allowing to wave the remote to emulate a mouse, as well as some buttons like in a standard remote control, and in some cases a keyboard.

Some people do not like this type of user input, but that’s my favorite way (I’m using MINIX NEO A2 Lite) of controlling TV boxes, as it provides a mouse pointer, a QWERTY keyboard, and various keys including volume keys and a D-Pad. The air mouse is also compatible with computers running Windows, Ubuntu, or other operating systems but some operations can not easily be done as the “Windows” key is missing, and shortcuts such as Alt+Tab are not possible. 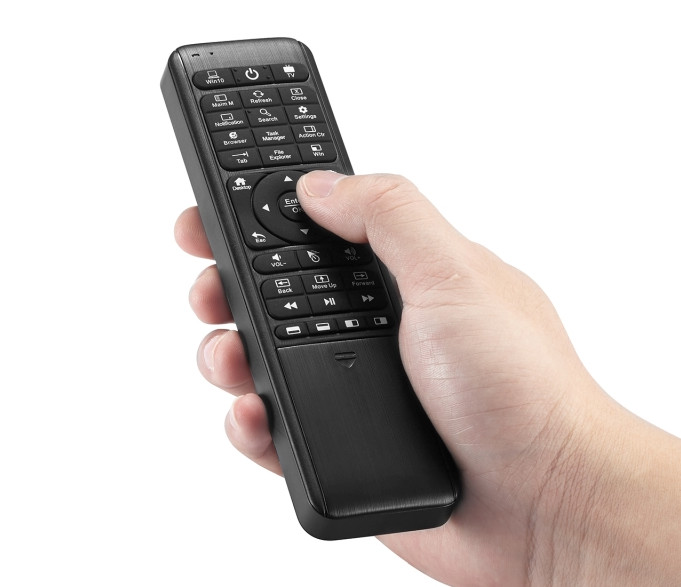 The guys at Pepper Jobs must have had the same kind of problem, as they’ve designed an air mouse working better with Windows 10 with keys to launch the default web browser, Task Manager, File Explorer, etc…, as well as all common keys like Fn, Ctrl, Alt, Shift, Tab, CapLock, etc… which may be missing – at least partially – on other air mice.

Some of the highlight of the air mouse: 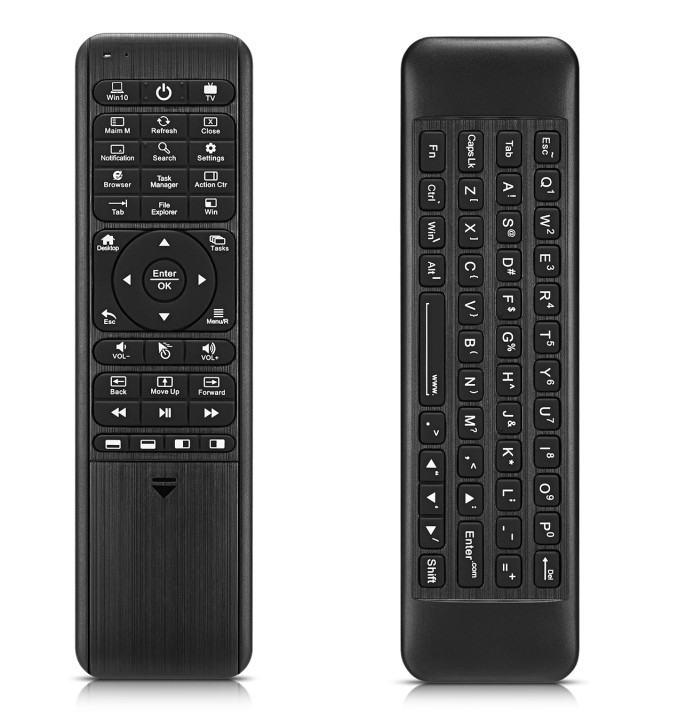 Pepper Jobs W10 GYRO remote control ships with a mini USB receiver (stored in the battery bay), a user’s manual, and is  sold on Amazon for $25., as well as on GearBest for about the same price. You may find further details on the manufacturer’s product page.

Gearbest also sells them for $24.95, including shipping. Depending on where you live in the world, this might be a cheaper alternative.

Thanks. I added the link to GearBest in the post.

BTW, I forgot to thank you for this article. I already have several air mouse/keyboard combos, and while they’re great for Android boxes and for controlling media players, they’re a pain in the back when it comes to work with Windows or Linux GUIs, or even terminals. I ordered one, let’s see how good it is.

On-screen keyboard. I put a shortcut on the desktop or tray area for those situations where more control is needed.

Will there be an option for a second language on the keyboard?

And pity there isn’t a numeric keypad on the front side of the remote. One of its uses is when you assign numbers to TV channels..

It was $25.00 earlier today, maybe they ran out of stock, and another seller is shown.

Here is what I’ve been using for over a year. Only $11 with shipping. Works great, have yet to replace the batteries. Has fewer buttons but everything I really need. A desktop link to the Windows on-screen keyboard provides full control whenever I need it.

Wish someone would make a remote like this with a number keypad on the non-QWERTY side. For PVR use a channel number entry option is definitely worth having. A remote similar to the Tivo Slide Pro would be great.

When you visit the links, you can find some alternatives like this one : https://www.amazon.com/dp/B0793T92X4

Also a friend of mine recommended this one which he is happy with (has a touchpad and recharges over USB) : https://www.amazon.fr/fran%C3%A7aise-compatible-lithium-ion-rechargeable-Rii/dp/B00QI0WYHS

Search for “gyro mouse” or “air mouse” on aliexpress.com. They have what you’re looking for.

I got the w10 gyro yesterday , I think I would like it a lot if I can get my keyboard to work.

well all of the sudden my keyboard works, and it works well. I like this product alot, I will be using it mainly for media but Im using it now to type this post. Very happy!