When I first started to read about zOrigin on Crowdsupply, I was not really impressed. Meh… Yet another Bluetooth LE fitness tracker with a few sensors, and an Android app.

But as I read further, I found out the interesting part was inside the device: ZGLZ1BA, a custom chip manufactured using ZiP (zGlue Integration Platform) chip-stacking technology, which produces something similar to SiP (System-in-Package) but at a much lower cost and manufacturing lead time. 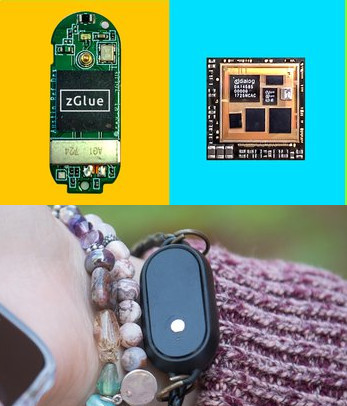 But let’s have a look at zOrigin tracker first, which acts as a demonstration / evaluation platform for ZiP technology. Key specifications & features:

The company has developed a demo Android mobile apps that interface with zOrigin over a Bluetooth Low Energy (BLE) connection, and will release the source code for the mobile apps as a reference.

There’s also Origin Dev Board in the works, which breaks out all the pins and functionality of the ZGLZ1 chip, and includes a PMOD connector, as well as two electrode pads and cables for heart rate monitoring.

The company makes some bold claims about ZiP technology. First, the technology is said to enable businesses of any size, and developers – including hobbyists and makers – to quickly design high-quality SoCs at low cost:

The turn around and costs is lower than SiP, because the latter “is based on customized interposers to optimize performance and capacity, which require customization with prohibitive cost and development time”, while ZiP relies on zGlue SmartFabrics “smart and programmable silicon interposer that delivers high-level of integration with the fastest time to market”.  So not many details are provided, but it’s supposed to be both cheaper and faster to manufacture. Such custom chips should mostly be interesting in space-constraints applications, as you’d be able to design much smaller PCB with an all-in-one chip.

The design is done in the company’s zCAD cloud based software to be released before the end of 2018, and a trial version will be available to backers. Designers will simply drag and drop chiplets – pre-fabricated ICs that are validated by zGlue to be part of the ZiP system – on top of the interposer, and then program the interconnects with digital interfaces such as I2C, SPI or JTAG.

Back to the crowdfunding campaign: zOrigin fitness tracker is available for $49, the development kit for $99, and you can also pledge $99 to get a pack of five ZGLZ1BA chips. Shipping is free to the US, but adds $5 to $10 to the rest of the world, and delivery is scheduled for then end of August 2018. A few more details about the technology may be found on zGlue website.

“SiP (System-in-Package)”… Pffft that’s not a “package” (e.g. with full encapsulation), that’s a module. There is already an industry-standard name for that thing: “Multi-Chip Module or MCM”. Actually, from the photo that’s a “Laminated MCM or MCM-L”. See more here: https://en.wikipedia.org/wiki/Multi-chip_module Custom MCM-L substrates with pins or balls loaded into standard pick-n-place trays for customer population are already old school. Almost any industrial-quality PCB Fab would be happy to fill your MCM-L order, just like any other PCB order. Many Fabs will also populate your MCM’s for you too, for a fee of-course. So what is “New” about this “ZiP… Read more »