It’s hard to keep up with all the systems-on-module based on Arm Cortex-A “application class” processors, but so far I can’t remember seeing any Arm Cortex-M “microcontroller class” SoM.

However, SoMLabs is currently working on VisionSOM-RT, a system-on-module based on NXP i.MX RT 1050 Arm Cortex-M7 processor clocked at 600 MHz. NXP i.MX RT series processors are actually promoted as a “crossover” processor delivering application processor performance with real-time capabilities right at the edge between the two classes of processors.

The module will support FreeRTOS real-time operating systems, and the company claims Altium Designer’s library file is available for all SoM variants (Schematics and PCB layout). 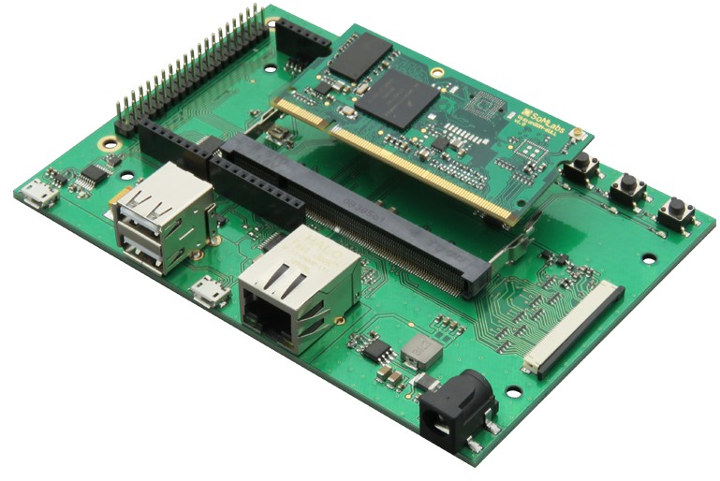 The module will be compatible with the company’s VisionCB-STD
carrier board exposing an Ethernet port, two USB 2.0 ports, Arduino headers, a 24-bit RGB LCD display connector, as well as a few buttons, a micro USB console port, and a 40-pin Raspberry Pi header. The Wiki has more details about the carrier board.

VisionSOM-RT system-on-module is in the final stages of development, and should become  available in September 2018. A few more details may be found on the product page.