There aren’t that many Allwinner H3 TV boxes with some models coming to mind being Zidoo X1 or Beelink X2, but of which appear to be phased out. If you are just looking for Android boxes, Amlogic S905X/S905W boxes are probably better options due to better support for video playback, but if you have desktop/server Linux in mind, then Allwinner H3 may be considered, and Beelink X2 used to be supported in Armbian, but is now EOS (End-of-Support).

Nevertheless, it should still be possible to run Linux on Allwinner H3 TV boxes with some efforts, and GearBest now has a promotion for Sunvell H3 TV box which comes with 2GB RAM, 16GB flash, and sells for $27.99 plus some small shipping fee ($0.68 here). 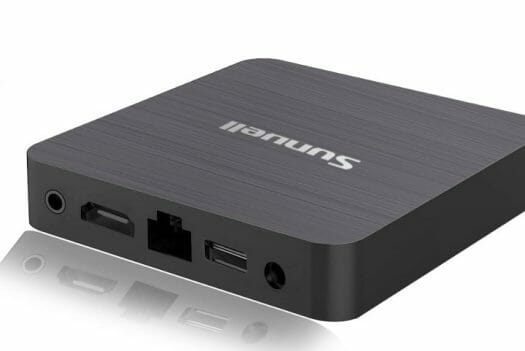 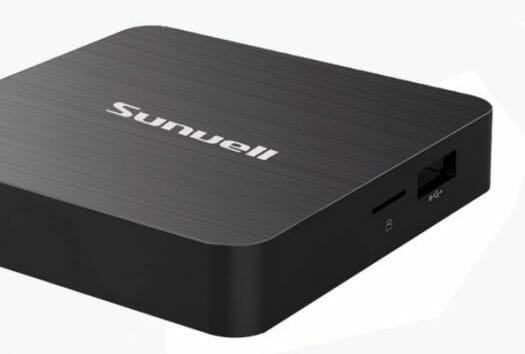 The box runs Android 7.0, and ships with a power adapter, an IR remote control, a HDMI cable, and an user manual in English. For reference, if you wanted a somewhat  equivalent Allwinner H3 development board, you could get Orange Pi Plus 2E, with the same 2GB/16GB configuration but adding GbE, and I/O headers for about $46 on Aliexpress. This price does not include the case, nor power supply, but the board is officially supported by Armbian.

Thanks to Suren for the tip.

interesting, but compared to opi+2e/tritium-2gb:
– no gigabit
– how is the cooling done: if it’s metal box you cant easily add fan (although it *might* be done well, but don’t kid yourself), if it’s plastic it’s cooking without the fan
– what is the wifi chip? xr819? it’s bad.
– only 2 usb ports
– no access to expansion pins
– price is a *promo*
– funny bit from ‘specs’: System Bit: 64Bit 😉

so all in all might work nice due to 2gb, but overall might be lower performance (still better than 1gb).

more thoughts:
– case is most likely plastic (or you should route wifi antenna outside yourself)
– above + using droid7 without any voltage regulation means it’s COOKING and throttling/core killing like 7th ring of hell

Android? On an Allwinner box? Why? Since you didn’t realize that Amlogic exists?

I’m so teased to buy one but there are many unknowns as KotCzarny mentioned. For a media box I think an Android is more useful than Armbian. Don’t take me wrong – I use two instances of Armbian at home (Octoprint and OpenHab) and they perform beautifully beside some freezes that occur once a month but I’m still investigating where is the reason. But I’m using them only with the web interface on a PC.
Another unknown is if Android is not made well (no voltage regulation or just buggy) how I will boot from microSD/local storage to run Armbian.

> For a media box I think an Android is more useful than Armbian Of course. But why would you then choose a cheap Allwinner box? Especially with an outdated SoC from 2014 with inferior codec support. If cheap and Android then Amlogic. At least if you’re interested in watching video and IO bandwidth is irrelevant. People who want to run Linux on such a TV box… better do some research first even if the box looks like a bargain. But usually with Allwinner at least booting something that is on SD card is no issue due to higher boot… Read more »

At this price it can only be a plastic enclosure. Most TV boxes I’ve seen so far just use a small heatsink on top of the main processor for cooling.

Several of these products get bundled with IPTV packages, so is this a left over stock clearence, hence the price dump?

This box has been around for a while, but not seens reviews of the android or box build quality from many users

They have many brands and spot the HDR ect claims in the photos on this 1ghz box?

Are the price of these boxes slow low because they are effectively being subsidized by tax payers in the Peoples Republic of China (taxes -> government -> grants/handouts/tax breaks to new technology companies -> unrealistic low price product compared to non-Red-China corporations)?

I like how the $15-$27 price shown in that page automatically converts to $27 only as soon as I select any warehouse or product.

One more futile advertisement for gearbest…

Althought not the best example of a TV box, this little thing runs Armbian pretty well.

How did you get Armbian working on this new board? I know the old R69 works but from all my tries I can’t get this new board to boot an SDcard, I just get:

Then it freezes. Do you have a special image or process you used?

Just a warning: It appears they either made a revision mid-run or didn’t quality check the memory they used in these boards and while some will boot Armbian images and work, others hard freeze at u-boot as I have shown above. The boards will only boot when uboot has very low DRAM settings, it seems so far, as the only image that partially works on my board is the Armbian Orange Pi Zero + 2 image and that is without ANY peripherals working besides HDMI and UART (No wifi, no ethernet, no USB). I am going to continue to work… Read more »

Why do people expect crappy TV boxes being good general purpose things? In the cheap market segment it’s a race to the bottom and SoC manufacturers like Allwinner help TV box manufacturers here. I hope you know that mainline u-boot uses a reverse engineered DRAM initialization? Most probably if you rely on Allwinner’s u-boot (able to cope with most crappy RAM chips soldered to these boxes) you’ll be able to boot any software stack since Allwinner’s u-boot will downclock DRAM on its own until things get stable. And of course you never know… next PCB revision in a TV box… Read more »

Obviously my goal here is to get H3Droid working on another publicly available box — as the goal of H3Droid has been to support ‘all’ Allwinner H3 devices (with-in reason). That said, obviously this one seems to be a big steaming pile of garbage and my success with getting anything but their crappy Android dist running has so far been almost futile. I agree with you, these are not good boards really for running Linux and expecting them to be stable. However, my hope was at least to get H3Droid working for it — though still have to have a… Read more »

> the goal of H3Droid has been to support ‘all’ Allwinner H3 devices IMO you should realize that we’re talking about 2 generations of Allwinner H3 devices. Those from 2015 until recently (old Allwinner reference design, old BSP based on kernel 3.4 and u-boot 1834.11) and the new ones following the new reference design: no support for voltage regulation any more, maybe the possibility to use really crappy DRAM chips to allow for lowest BOM costs possible needing special u-boot/SPL support, new BSP version. Supporting H3 devices few years ago was fun and even useful but today this is IMO… Read more »

These boxes are just a collection of garbage…

Unless you truly want a crippled H3 that can’t run anything but their garbage Android version which for heat control runs at a constant voltage an then kills cores constantly so it doesn’t frelt, then stay away. The old Sunvell R69 is almost more worth the money (can still get it on banggood I think) even with shitty ram ( you can’t use 1080p ) at least the thing is usable with another OS/Image without having to play manually fix uboot as it seems there are issues with RAM quality again and not all memory chips seem able to be… Read more »