I previously wrote about Etcher Pro when posting about the fairly expensive SySTOR SD card duplicator that allows you to copy one (micro) SD card content to multiple cards on one go, for instance to speed up the process of flashing firmware for multiple single board computers.

Made by the team behind the popular Etcher firmware flashing tool, EtcherPro promised to be a more cost effective solution, but there was not a lot of details at the time. Balena – previously resin.io – has now written a bit more about the project progress in a blog post. 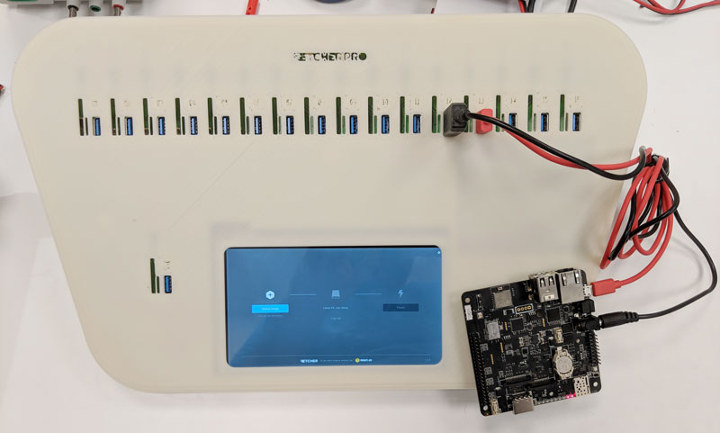 EtcherPro is a standalone hardware device, meaning no PC requires – with a user interface based on Etcher GUI, and allowing to copy a micro SD card, SD card, or USB flash driver to 16 destinations in one go thanks to USB 3.0 ports and SD card sockets. What makes the products even more interesting compared to existing solution is support for flashing a firmware image directly to boards with eMMC flash such as the Raspberry Pi Compute Module using for example the company’s balenaFIN – previously known as resin.io Fin – carrier board for Raspberry Pi CM3 module.

You’ll also notice 16 extra USB 3.0 ports on the top of the photo above which are apparently for SD card readers in order to make the design modular. If you need to duplicate more than 16 cards / boards, it’s also possible to daisy-chain multiple Baleno EtcherPro to increase capacity with the company talking about 10 or more EtcherPro devices.

Another interesting point in the blog post is the choice of the processor. They wanted a Linux capable board/processor with high throughput USB 3.0 ports and reasonable pricing. They tried UP Squared, Banana Pi, Sapphire, ODROID-XU4, and Rock960, but they ended up getting blocked by some issues which they did not expand on, and finally went with an NXP i.MX 8 compute module that would dock directly onto their existing design, and reduce the number of  components. They can also target 75 MB/s per device with the processor which compares well to the 33 MB/s achieved by other SD card duplicators.

The first production batch is expected for Q2 2019, and Baleno targets a price of $990 for EtcherPro.

In the blog post they talk about ’75MBps’ (capital B). Does this make a difference in the English speaking world?

’75 Mbps per device’ is less than 10 MB/s so with the ability to write to 16 slots simultaneously this would end up with rather low ~150MB/s bandwidth requirements for the host. But I heard at least Rock960 got rejected due to a software issue with both USB3 ports currently sharing a 400 MB/s bandwidth limitation (a fix for RK3399 should exist somewhere in RK’s repo but I’ve not seen the fix in the wild)

It should matter. However I’m used to seeing Mbps (megabit per second) and MB/s (megabyte per second) rather than MBps for the latter.

Me as well. I only spotted the capital B when doing some math to get the host’s guaranteed USB3 bandwidth (1200 MB/s in total with 16 slots — I would love to see how they did it with i.MX8 since I would assume there must be one or even two PCIe attached additional USB3 host controllers there?)

OK. reading again the blog post on Balena, I can see they “target” 75 MBps per device, so that would match the theory if both USB 3.0 interfaces can be operated at close to 5 Gbps in i.MX 8M.

The SySTOR duplicator you mentioned clearly talks about ‘2GB/min or 33MB/sec’ so I really doubt that Balena works with Mbps here since they also talk about competitors with ’33MBps’ and them being in an advanced position with ’75MBps’. If these are bits then they’re three times slower than SySTOR.

You guys are correct in that we’re referring to megabytes per second; we’ve updated our blog post to remove doubt!

Still wondering how you achieve this on the i.MX8 without additional USB3 host controllers like e.g. an ASM2142?