Smart speakers normally work both offline and online, but their offline ability is usually limited to just one or two wake words, that when detected let the speakers listen to speech that it will send the cloud for further processing. It’s done that way because the speakers would not have enough resources, e.g. processing power, storage to contain the whole data required for natural speech processing, and wake words reduce the number of requests to the cloud, and improve privacy.

But in some cases, you may not need the full language, and instead would like to use several voice commands to control a device without the need or the ability to connect to the Internet/Cloud. So Audeme has designed an Allwinner A13 based Arduino shield named MOVI (My Own Voice Interface), and that can recognize and/or synthesize up to 150 full sentences of your choice in English, Spanish or German. The shield has been around since 2015, but the company recently started to offer an adapter so that it can work on the Raspberry Pi 3. 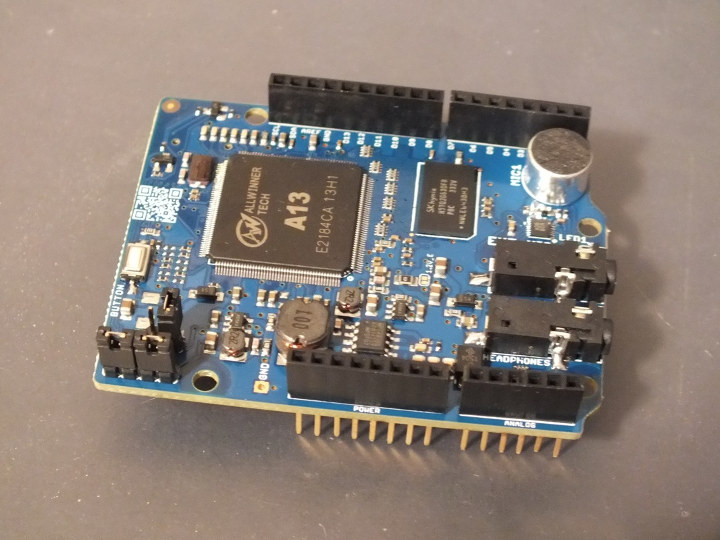 MOVI is programmed directly from the Arduino IDE or in Python (Raspberry Pi 3 only), requires no voice samples for training, is speaker independent and does not require an Internet connection. You’ll just need an Arduino board or Raspberry Pi 3 + adapter, a 7V to 16V 500mA external power supply, and headphones or a speaker.

You then need to download and install the MOVI sketch for your Arduino programming environment and adjust the code with your own sentences as shown in the introduction video below.

MOVI shield can be purchased on Amazon or their own store for about $75. If you plan to use it on the Raspberry Pi 3 you may want to add the adapter that costs $6.50. It should be noted that if you’re going to use a Raspberry Pi you may be able to achieve something similar with a USB microphone. More details can be found on the product page.