You probably own a few battery-powered devices, maybe one or two phones, a camera, Bluetooth headset, etc…, and each requires a different cable. It’s also easy to forget bringing the right cable, and once your device runs out of battery you’re out of luck.

inCharge 6 universal charging cable aims to solve this first world problem by offering a single cable that supports devices charged through USB Type-C, Lightning or Micro USB port, and small enough to hook to your keyring so you never forget it. Alternatively, the company also offers a 1.5-meter version of the cable.

The cable takes power from USB type-A or type-C power supply, and output to USB type-C, Lightning or Micro USB with the latter two available through the same connector.

The cable also allows you to charge a device from another device, and transfer data between the two (Charge & Sync) as illustrated below. 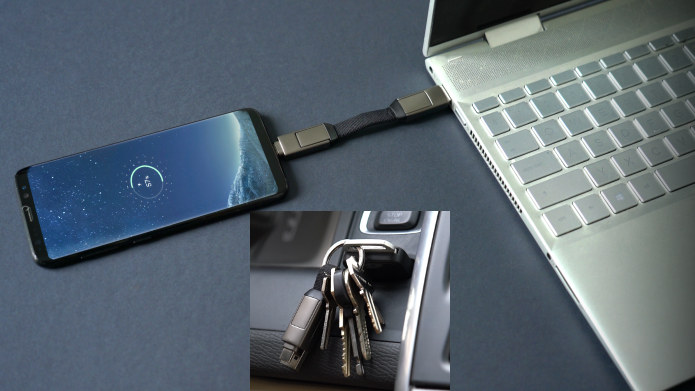 They’ve also made the cable to last with a metal housing made of zync-alumium allow, and TPU cable guard to protect the four internal copper wires itself covered by a nylon reinforcement.

To keep the cable as portable as possible, neodymium magnet keep the two end of the cable together when folded so it’s about the length of a key during transport.

inCharge 6 launched on Indiegogo a few days ago, and they’ve well surpassed their 10,000 Euros funding target with close to 180,000 Euros raised so far. A pledge of 12 Euros / $13 should get you one universal charging cable, but if you prefer the longer 1.5-meter version, 17 Euros / $19 is required. They also have bundles with different quantities up to 5 pieces for 45 Euros / $50. Shipping is expected for December 2019, but there’s no information about shipping costs, and it looks like backers will be informed once the rewards are ready to ship.

Or you could just buy one of these to solve the problem in most cases for less than $2US.

There are many such cables, but they don’t seem quite as convenient and compact as inCharge 6.

The compact length makes it *less* useful and convenient for how I would typically want to use it. More so considering the price (+ shipping $$$).