That means you may have to spend fairly more than you may expect for a Windows 10 Arm laptop, and for instance, Microsoft Surface Pro X goes for $999 and up with a Snapdragon 8cx based Microsoft SQ1 processor.

But much more affordable Arm laptop may not be that far off, as Microsoft published some news about their education solutions, and two new Snapdragon 7c laptops are in the works:

A $300 Arm laptop with decent performance looks promising, but so far we have very few details at this point, so I’ll speculate based on the specs of the earlier JP.IK Turn 201 laptop features on an Intel Atom x5 Cherry Trail processor, as well as Qualcomm Snapdragon 7c features. 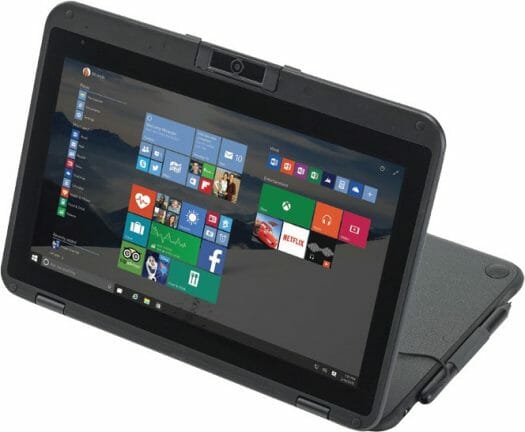 We may not have to wait too long to get more details, as Microsoft will showcase its education solution at the Bett Show in London on January 22-25. This particular laptop will probably ever become available to consumers, but it should mean lower cost Arm (Windows 10) mobile PC may soon be offered to the general public.

I hope for 4GB at the very least — $300-range chromebooks have as much.

This laptop includes 4G though. I think it adds quite a bit to the cost.

Sub-$100 phones have no issue having 4G LTE modems. I guess it all depends what QCOM will try to make on those entry-level chips. We shall see.

Whats up with those 11.6″ display with 1366 x 768 resolution? Seems so bad for this time. I do see that most Chromebooks have this resolution. There are so many tablets out there with better screens. Is it that much more expensive to source a decent screen?

I suspect aside from a more expensive display, having a usable screen resolution would also requires a faster GPU (both pixel clock and render performance), more CPU cycles for video decoding, possibly an extra RAM chip to have a wider bus for the total memory bandwidth and then a bigger battery and better cooling to make up for the increased energy usage. The difference on each one of them may be small, but at $300 they clearly have to cut corners somewhere and may already be at the limit in one or more of those areas.

Actually I’ve met quite a number of people who can’t stand too high resolutions on PCs, for reasons mainly related to default font size in some applications (like browsers) which are too small on small displays. I’m personally fine with 2560×1440 on my 14″ laptop but lots of people find this too small, and I admit that I spend my time pressing Ctrl-+ in firefox. So I wouldn’t be surprised that entry level hardware tries to cover the vast majority of users even if some consider it suboptimal.

> default font size in some applications (like browsers) which are too small on small displays.

That’s what HiDPI mode is for. There exists no reason to render fonts too small on displays with a good (high) resolution. 🙂

> it should mean lower cost Arm (Windows 10) mobile PC may soon be offered to the general public. Is the general public really interested in mobile thingies that are barely usable? Comparing the probable specifications above with for example the Microsoft Surface Pro X the latter is not just playing in a different league but that’s a different sport. The Surface Pro X is usable as a tablet using a pressure-sensitive stylus, features over 5 times more pixels, a display that can be used outside dimmed rooms, a usable multi touch interface, 4 times the DRAM, at least 4… Read more »

To tinker yes, to really use, who knows…

It looks like a barely usable rehash of a five years old tablet.

I feel for the kids that’ll be forced to use this. W10 on 32Gb storage is a pain.
Also I’m pretty skeptical about the ability to tinker with it. Most likely it will require a non-trivial amount of effort to technically make it boot into Linux with the most important bits MIA for a year or two after the hardware will become obsolete by any account.

Kids can install WSL at the expense of downloading a free app from the app store.

So, this windows joke from qualcomm is still not over? it’s starting to piss off people really bad 🙁