mikroBUS is a socket interface that allows you to connect MikroElektronik (MikroE) Click add-on boards that can be buttons, sensors, a servo controller, a wireless module, and practically anything you may think of since there are over 700 Click boards to choose from.

We already covered several SBC with MikroBUS sockets starting with SolidRun HummingBoard Gate board that offered a single socket for 150+ Click boards at the time (2015). Other boards include Azure Sphere MT3620 with two MikroBUS sockets and MikroElektronika’s own Flip & Click board designed to take one Arduino shield and up to four Click boards. 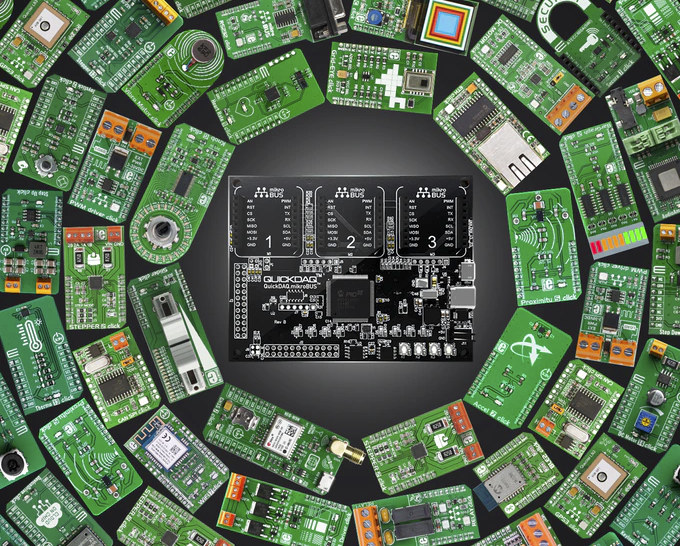 Another upcoming option is QuickDAQ.mikroBUS developer by EmbeddeTech in collaboration with MikroElektronika, powered by a Microchip PIC32 MCU, offering three MikroBUS sockets, and designed to work with “Virtuoso Low-Code Environment” that allows people to program the board using NodeRed-like visual programming and generate a Visual Studio project with code from the visual representation.

The focus is really on the software part of the project, so they did not provide the full details for the hardware. QuickDAQ.mikroBUS comes with a standard .NET class library and can be used in any normal .NET application for data acquisition, but the highlight is Virtuoso Embedded Target Development Toolkit.

The company describes the program as follows:

Virtuoso is a state-of-the-art general-purpose Low-Code platform, which means it gives you the ability to design applications at a high level of abstraction without writing any code. Virtuoso supports, among others, a C# .NET WPF host platform that allows you to design applications by dragging and dropping nodes, configuring them, and connecting them to each other. This is called “Node-Based Visual Programming”, and Virtuoso translates your high-level graphical design to a fully formed Visual Studio project that you can build and run. You can also effortlessly host virtual microprocessors in your app, which is where the power of combining the QuickDAQ.mikroBUS™ with Virtuoso really shines.

EmbeddeTech has just launched QuickDAQ.mikroBUS on Kickstarter with an $8,000 funding target. Rewards start at $99 for QuickDAQ.mikroBUS Early Bird with the board and Virtuoso Embedded Target Development Toolkit (1-year non-commercial license). Note the license only needed if you want to host virtual embedded C/C++ targets, and is not required to build “low-code C# apps”. The entry-level reward does not come with any Click boards, and most people will likely prefer one of the bundles with QuickDAQ.mikroBUS and various Click boards with pricing ranging from $140 to $597 (with 23 Click boards).  For backers inside the US, shipping fees are included in the reward price, but for backers outside the US, an additional shipping fee will be charged via PayPal after the campaign finishes.  Backers should start getting their rewards in September 2020 if everything goes according to plans.