KiCad open-source EDA (Electronics Design Automation) suite software is now very popular, and many new projects are designed with the utility. AFAIK, some companies like Olimex switched all their new designs to KiCAD. But since many schematics and PCB layouts have been designed with other tools like EAGLE, Orcad Allegro, or Altium PCB design tools, it would be nice to be able to import those designs into KiCad.

Converters have been around for a long time but when I tried to convert Beagleboard-xM OrCAD schematics to import them in KiCAD back in 2012, the results were really awful and unusable. But I recently saw a tweet saying it’s now possible to import Altium files into KiCAD.

Finally, importing #altium boards into #kicad is only one click away (in the developer version).

This allows to view and edit #opensource #hardware which was designed with #proprietary software, and thus, in fact, not open for everyone. pic.twitter.com/oogiJeyynW

This requires the development version though, and while one day it will be in a KiCAD release (KiCAD 6.0?), if we want to try it today, we’ll need to build KiCAD. So I’ll start by showing how to build KiCAD on Ubuntu 18.04 before trying to import an Altium file and see how it goes.

KiCAD documentation website has generic instructions to build the software, but nothing really specific to any Linux distributions. Let’s do that with Ubuntu 18.04.3 LTS. [Update May 2020: Tested again with Ubuntu 20.04]

We should then install some dependencies:

Note it’s possible some dependencies are missing as I’ve built other programs before, and some may have already been installed. If you try on your own Ubuntu 18.04 installation and I forgot some do let me know.

We’ll also need to get, build and install NGSpice library since it’s not part of Ubuntu package:

You may want to edit get_libngspice_so.sh script before running it, with make -j <number of cores> for a faster build.

Now we can configure KiCAD as follows:

If you can an error during cmake, you can try to find the missing packages with commands like aptitude.

Upon successful configuration, you should see an output similar to:

If you want to install it on your system run:

I just want to try it for now so I’ll run the executable in the build directory:

We get “KiCad 5.99” welcome window, and we can click on OK to start the program.

Thomas used LimeSDR PCB layout as an example in his Twitter video. But I’ll try BeagleBone Black Altium PCB layout instead which you can find on Github (BeagleBoardBlack_RevA5_Altium.zip).

At first, I tried to launch kicad to open the file, but I could not find any way to import PCB layouts even switching to “Edit PCB“, and was eventually told I should open pcbnew in standalone mode which I did, and there’s indeed an “Import Non-KiCad Board File” option. 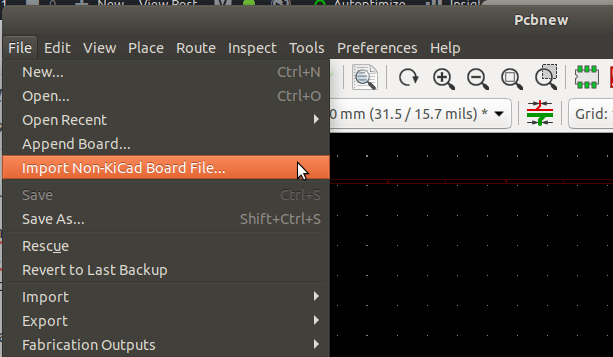 Now we can filter for Altium Designer .PcbDoc files, and load our file. 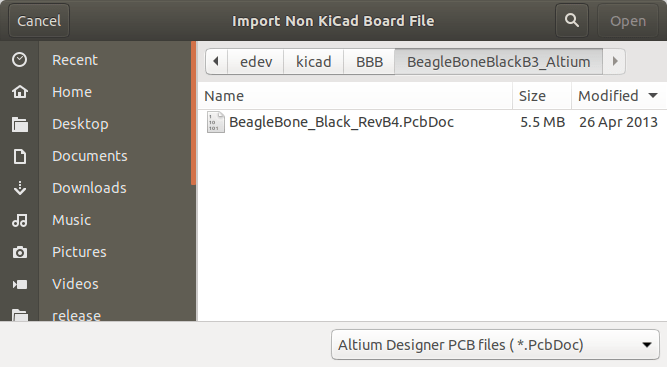 Some errors show up. Altium PCB import function is still in the development branch, so it’s expected some errors may still occur.

Some parts of the PCB layout look fine.

But in other places, it’s all mixed up for now. 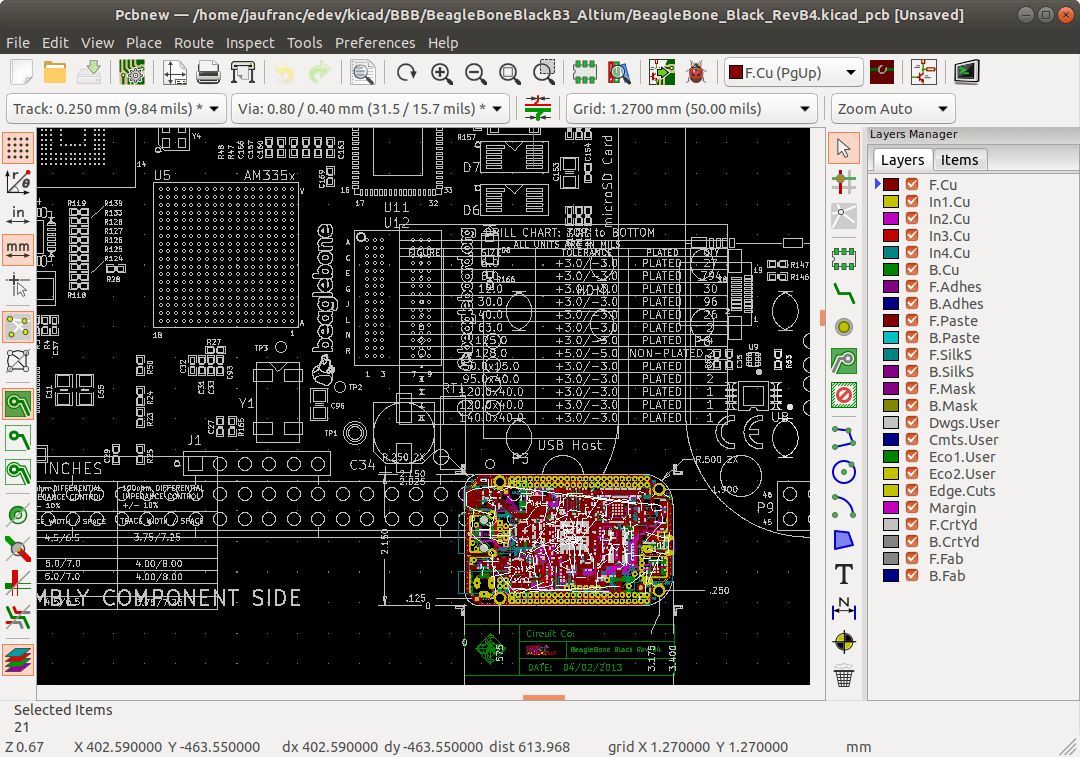 It’s getting there, but there’s still a bit more work, or BeagleBone Black schematics are based on an older version of Altium that’s not supported by KiCad import function.

[Update: Actually the import worked as expected… This is what it looks in Altium.

Yes, there are fabrication and assembly drawings in a giant scale around the board, along with notes, drill table, and layer stack up pic.twitter.com/3jmmTcsb85

Error messages should be fixed with the following commit.

Altium schematic support is also coming, and for people wanting to import OrCAD Allegro files. Thomas explains there’s no open-source parser for allegro just yet, but the files could be imported via an Allegro -> Altium -> KiCad conversion. He also mentions it’s possible to create an Allegro parser, but their file format seems to be some custom binary.

If somebody with Altium designer could load BeagleBone Black PCB layout and take a screenshot it may help with debugging.

The another exciting new is the BeagleBoard.org Foundation (I’m member of the Board of Directors) has contracted Kicad Services Corporation (https://www.kipro-pcb.com/) to convert the BeagleBone AI design from Cadence Allegro to KiCad. Seth Hillbrand has almost completed the converter and it should be available in the V6 release.

be careful with the development version, we had to switch back to 5.1.5 stabile after we burned with few multilayer boards got inner layer connected to GND with no reason, (vias which were not isolated from the inner layers) which DRC didn’t catch my guess is their gerber generator is buggy.

we have had bad luck with importing orcad files to altium..

I am very happy to finally see altium imports in kicad!

Wondering when/if orcad 9 files can be imported. Not that I’m having something substantial, just might dig out the old pc with the stuff from my apprenticeship time around y2k… Nostalgia is coming up 😛

Tried this on a virgin 19.04 system. The libboost .65’s have different versions.

Could you wait two weeks and do this again after 20.02 comes out?

When building the development version of the libraries are needed since they contain the header files.
So you’d probably need to run:

In a more generic case, if some header files are missing, just search for for the name with aptitude

then look for -dev libraries on your system.

I’ll update the instructions once I install Ubuntu 20.04 on my system.

If we’re talking about the CMake build, it’s better to just use the Ninja generator instead of the Makefile generator.
Ninja defaults to nproc+1, and will build faster as well.

I’ve tried this on new installs twice with Ubuntu 18.04, and both times the software builds fine once I add the missing libraries, but then displays an error “cannot open shared object file: No such file or directory” when trying to run EEschema or Pcbnew. Any idea what the cause of this might be?

on my Linux Mint 19.3 the package “swig3.0, doxygen and doxygen dot/graphviz” was missing, so I had to install it with “sudo apt install swig3.0 doxygen graphviz”

Thanks. I’ve added the missing packages.
I did not have doxygen on my system when I built KiCad, so the documentation did not get built but all programs still work.

Thanks for sharing the instructions, for a first-timer compiler of KiCad, I was missing those libraries:

Thanks. I added those and took the opportunity to make sure it works with Ubuntu 20.04. I had to select libpython3-dev instead.

This did work on my regular machine but I tried a virgin install and got:

And that was with libpython3-dev