At the time, the company would offer the “basic version” for $199 on their Alibaba store, but now GOLE has launched the device under the name Gole11 on Indiegogo where rewards start at $119 (there was a $99 reward, but all perks are gone) 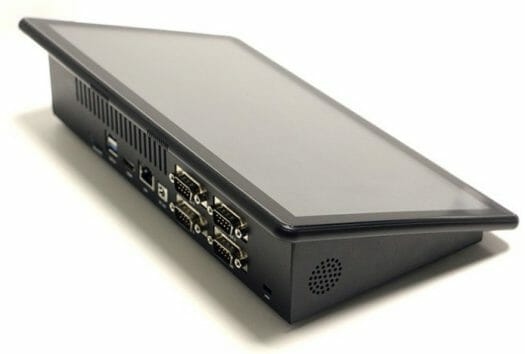 Gole11 ships with Windows 10 Pro (activated) but it has also been tested to work with Linux. The company does not make any promise about Linux support and a $20 refund might be obtained if you do not need the Windows license.

The device is moslty designed for applications using the RS-232 or RS-485 ports such as PoS machines, digital signage, HMI for industrial use cases, and so on, but there’s no reason why you should not be able to use it for other purposes.

The retail price with Windows 10 Pro license will be $259. The funding target is fairly high at $100,000 US, which means they’ll also need to find at least 500 people willing to pay $169 (Early bird 3) for the device for the campaign to be successful. If so, backers should get their rewards shipped sometimes in June 2020. If not, you’ll get a refund.

Hello Gole, Obviously aimed at POS applications but a few simple alterations should broaden the potential market. – Wall mount. No back view so can’t tell if this is supported or not. – Alternate/smaller screen option. Not every app really needs 11 inch. – Disable power button and boot when power is applied. – Warranty and MTBF data. “Industrial” apps are a non-starter without this. – USB ports on left and right sides. Also, 4 DB9s seem like overkill since just about everything is going USB. – Ability to disable unused USB ports. Otherwise, employees will be doing all sorts… Read more »

On the Gole 1 crowdfunding site there is a lot of negative feedback as the devices were returned by customs due to not matching EU regulations and a lot of shipped devices not working (for long),..

The problem with indiegogo is if you read the TOS, the maker is under absolutely no obligation to actually produce a unit. They can just take the money and not give you anything. I got burned once using that platform and I’ll never fund anything else on there again.

Oh well, it got only 31% funding anyway.
https://www.indiegogo.com/projects/gole11-powerful-11-6-mini-aio-pc-windows10-pro#/comments

Jean-Luc, maybe start doing some mini-follow-ups whenever you have an article about sth. being funded on IGG?

I used to make yearly reports like that one: https://www.cnx-software.com/2015/01/05/crowdfunding-report-for-2014-on-cnx-software-blog/

But I stopped since it takes a lot of time, and virtually nobody is reading those.