When I need to connect more than one device over Ethernet I usually think Ethernet hub or Ethernet switch. I think the former is harder to find these days but was convenient to capture Ethernet packets with Wireshark. I had however never heard about Ethernet splitters until I saw a pair sold on  Gearbest for $7.99, but soon found one on Aliexpress for just one dollar plus shipping. 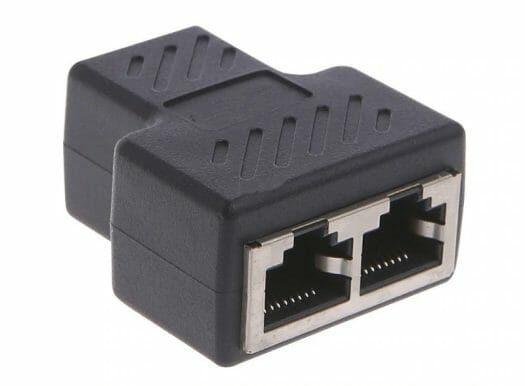 At first sight, it does not seem particularly useful especially when looking at the connection diagrams that show it used as some kind of Ethernet extender where you need to connect two Ethernet cables to the router, and again two cables to the targets since the same signal could be transmitted over a single cable with a $10 Ethernet switch at the other side. 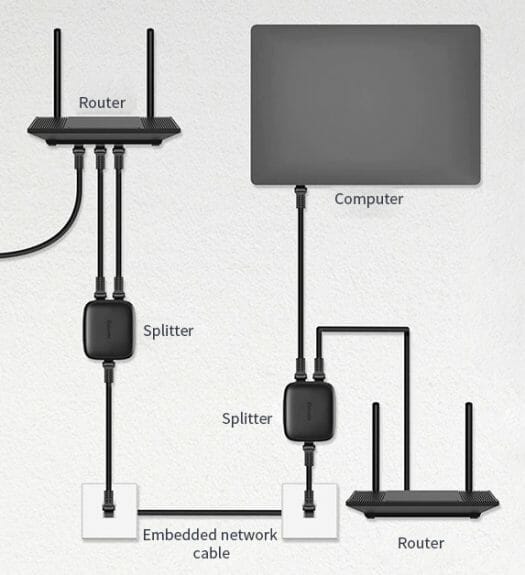 There’s a method to this (apparent) madness, as Cat 5E or grater cables come with 4 twisted pairs of wires, and while all 8 wires are used with Gigabit Ethernet, only 4 wires are needed with Fast Ethernet for speeds up to 100 Mbps. Ethernet splitters are just splitting the four pairs of wires into two dual-pairs to carry 2x 100 Mbps from the router meaning the bandwidth is not shared and you get the full 100 Mbps for each connection on each end on the other side. That also means it does not work if you need Gigabit Ethernet.

One advantage of Ethernet splitters is that they do not require any power source, and with their small size they are quite convenient if you want to extend an Ethernet connection. Some of the use cases include PoE cameras where a power outlet may not be available for an Ethernet switch and any other network topology where you may want to save on cabling for connecting two Fast Ethernet devices. 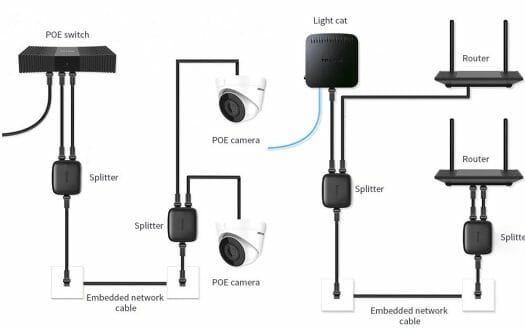 I’ve been used to using quite a number of these until about 15 years ago before gigabit became the norm. They were pretty common in enterprises having to connect both a PC and a printer to a single wall plug. But this required to have the 4 pairs in the wall, which was not always the case when the cabling costs were cut by having a single RJ45 connector per desk… Also it’s more common to find the other model with a 15cm male cable connected to a block of 2 female connectors, which is also more convenient as it… Read more »

Silly question, but instead of picking off 2 pairs per connector, couldn’t you have just split the cable and run all the pairs to both? (I’m assuming that CSMA/CD is still supported in the modern standards)

Then again, I have no idea how that would interact with PoE… that might be a horrible idea, actually.

Ethernet is all switched now.

Yes this does work and is called a passive hub. It’s horrible because there’s no CSMA/CD in full-duplex mode so the card doesn’t expect to sense a collision on a Tx pair, and frame losses are only detected at the transport layer. Typically running UDP with large datagrams (e.g. NFS at 8kB) would be fun because some fragments would always get lost and the whole thing will have to be retransmitted. It’s more used to build passive taps to capture traffic. But it does definitely to attach up to 2 machines on a single connection. It will not work with… Read more »

Oh, I’d expect it to be horrible. What I didn’t expect was the answer “yes, it works, it’s still part of the standard after all these years”

Thanks for indulging my curiosity!

No no it’s not at all part of the standard. It’s a horrible hack that *happens* to work 🙂
Just found one example here: http://www.zen22142.zen.co.uk/Circuits/Interface/pethhub.htm
I’m pretty sure I used to hack using network card transformers in the past. I don’t know which option is the least dirty though!

Thanks, useful for schools where each adjacent user doesn’t need over 100 MB bandwidth (= most).

4 pairs predates Cat5e by a lot… Even Cat3 had 4 pairs. The original intent (of the 802.3 10BaseT spec) was the ability to run two (analog) phone lines (or an ISDN line) + ethernet in the same cable. (And, while Cat3 wasn’t rated for 100mbit, it would often work on short runs if the cables in question were already installed someplace where replacement would have required opening walls.)

Such splitters were found for a very long time to combine PC+phones/fax on a single wall plug.

And regarding Cat3, I do still have quite a number of such cables which are only 1m long, and they work fabulously at 1 Gbps. I tried them at 10G, they do work but not that great, there are losses. But there’s nothing surprizing here, the amount of losses over only one meter is nothing compared to 100m and such cables were supposed to handle 10 Mbps over 100m after all.

If you trust cable lengths on the pix, you couldn’t, unless you moved computer or router.

I’ve used this to get a “TV network” to a STB as well as regular internet to the TV itself from a providers fibre box, over only one cable, instead of having to lay two cables. Alternative is vlan trunking, but that would have required the tag popping at the tv end.

I did the same years ago for one room (two 100Mbps ports) without any splitter, just with a double RJ45 ethernet wall jack. On that end it was just a matter of connecting the right wires to the punch down terminals of each port. On the switch side it’s a little more ugly as the two adjacent RJ45 plugs get 2 twisted pairs each but neither has any strain relief. Which isn’t a problem in this case because it’s a fixed installation (i.e. nobody pulling on the cables). Anyways, works like a charm.