At the initial stage of development, many people would connect their Arduino board to a circuit build on a breadboard, and once this is done, some may either want to design their own board or for simpler circuits, simply move from the breadboard to a perfboard with components soldered to it.

With Microchip ATMega32U4 based KitDuino Proto you could do that directly on the Arduino board itself since it comes with a small prototyping area. 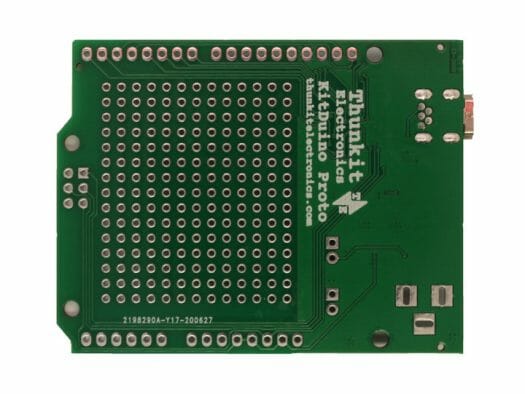 KitDuino Proto can be programmed with the Arduino IDE using the Thunkit Arduino Core available on Github. Thunkit Electronics also provides KiCad design files and some basic documentation in another Github repository.

The board can be purchased on Tindie for $12.49 with headers not soldered by default for more flexibility

Pretty cool and inexpensive board, it’s way better than soldering components with flying wires, and can actually lead to final products for small series. A small area to solder a few SOIC would have been cool (NOR flash or many I2C sensors are only found in this form factor).

The same would be cool for ESP8266/ESP32, because I’ve been soldering components around quite a bit :-/