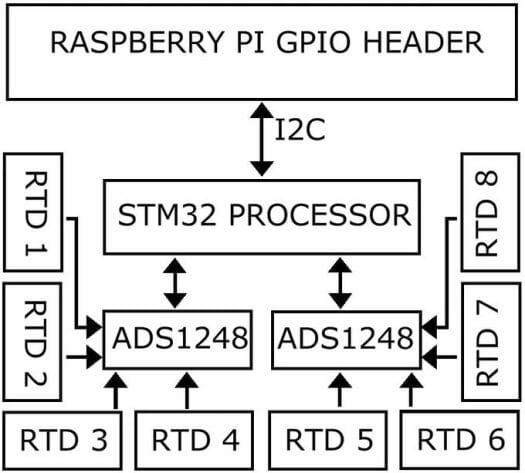 Sequent explains how it works in a bit more details:

The A/D converter measures the temperature by sending a 1mA current through the RTD PT100 thermistors and measuring the voltage. The current generator is using a 820 Ohms, 0.1% resistor. Thus, the accuracy of an un-calibrated device is limited to 0.1%.

To achieve better precision, we provide a software “calibrate” command. Field calibration up to 0.01% is possible using a 0.01% 100 ohms resistor.

Command-line tools and Python drivers will be available on Sequent Microsystems’ Github account. They also integrated the board with NodeRed using eight RTD thermistors to show the data in a neat web-based graphical dashboard. 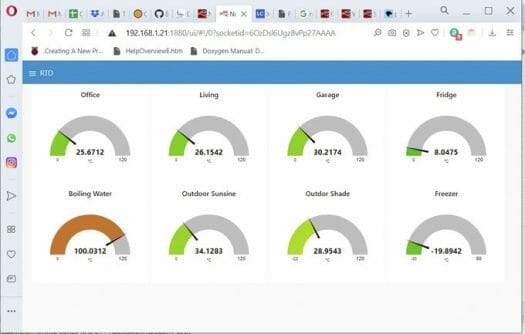 There’s also a user guide but shared in an “interesting” way as you have to go through a checkout process to order the free e-book.

MEGA-RTD has recently launched on Kickstarter with a $1,000 funding target that has already been surpassed. Rewards start at $30 for a four-channel board, $40 for an 8-channel board, and go up to $320 for a kit with eight MEGA-RTD boards supporting 64 RTD thermistors. Shipping adds $5 to $15 depending on the selected rewards. Note you’ll need to add your own Raspberry Pi board, as well as purchase 3-wire RTD thermistors such as PT100 resistance temperature detectors available for $3 and up on Aliexpress. Rewards from the crowdfunding campaign are expected to ship in October 2020.

It sounds interesting, but the manual share sounds fishy.