Embedded systems companies tend to use processors from established firms like NXP Semiconductors or Texas Instruments, we’ve seen few systems-on-module based on processors from Amlogic, Rockchip, or Allwinner which are popular on this blog due to their value proposition. 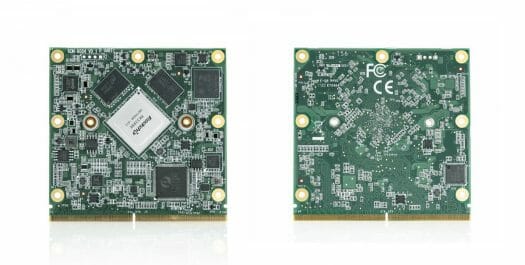 The company provides U-boot and Linux support for the module, and explains the board is “suitable for high-performance applications and is leading regarding price/performance ratio” for applications such as retail POS, digital signage, or kiosk, while also mentioning that a “dedicated software community continuously pushes the application spectrum”. So this module may have only happened because of the work of the community on low-cost RK3399 SBC‘s.

While Kontron did not mention any carrier board for SMARC-fa3399 SoM, the module should be compatible with the company’s standard SMARC 2.0 carrier board pictured above.

Samples will become available in Q1 2021, and the company is also planning for a 3.5-inch board with Rockchip RK3399K SoC. Additional information may be found on the product page and the announcement.

Incredible what a great community can do for a silicon vendor.
Now one can argue if that is a good development for the established chipmakers putting lots of efforts in their own BSPs…

Well you think RK will be impressed by a couple of thousand additional units sold? Allwinner also doesn’t seem to be impressed.

8GB of RAM… I thought 4GB was the maximum

It looks like it may be 4GB per channel? From the datasheet:

RK3399 has high-performance dual channel external memory … space. Maximum address space of one rank in a channel is also 4GB,

Maybe just a copy&paste mistake? See page 2 of the datasheet PDF where it’s mentioned in the upper right: ‘PCIe on SMARC connector (all 4 lanes) Directly from i.MX8 CPU’.

Now I can see the block diagram also mentions RK3399Pro, and in that case, 8GB is definitely supported as we have other boards like Rock Pi N10 with 8GB RAM (4GB for CPU, 4GB for NPU).

But since we learned that RK3399[K] and RK3399Pro are not pin compatible but the latter is quite larger this would require Kontron to design a different SMARC module for the Pro/NPU variant so we’ll see whether this will materialize anytime soon or at all. Well, there’s a question mark behind the “PRO” in the block diagram.

Those are listed as RK3399 only, but the Advantech one at least have extended temperature range, so that should mean RK3399K