You’d normally need a crimp tool to make or repair your own RJ45 Ethernet cables. The process is split into two parts with cable preparation for straight or crossed cables, and then assembly with the crimp tool, before testing your cable.

Harting RJ Industrial Multifeature is an RJ45 connector that is described as “tool-free”, and “robust and reliable: with integrated cutting tools for fast and easy assembly. So the crimp tool is not needed anymore. 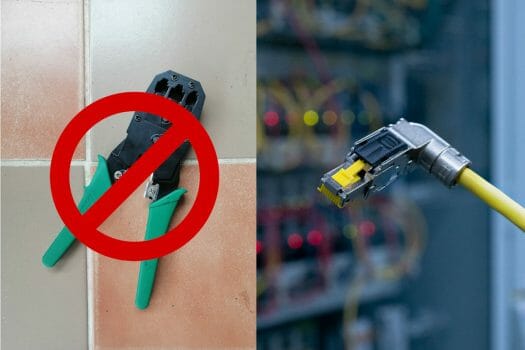 The company explains it typically takes 50% of the time for the preparation of the cable and another 50% for connecting it to a traditional RJ45 plug. But the RJ Industrial Multifeature is said to save around 25% of the assembly time, by making the second part faster.

You’d still need to prepare the cable in the traditional manner, but then the second part of the assembly should be quite faster and less prone to errors. The “tool-free” is a bit of a misnomer, as it should really be “crimp tool-free” RJ45 connector since obviously, we still need some tools to cut the cables. The best way to understand how it works is to check the video below showing how to make a straight Ethernet cable using Harting plug.

The wires are automatically cut to size when closing the RJ45 connector. It works with flexible and rigid wires from AWG 26 to 22. The company also says the interface is “70% smaller in size, offering Gbit Ethernet with a more compact footprint”, but I don’t quite understand compared to what type of RJ45 connector… 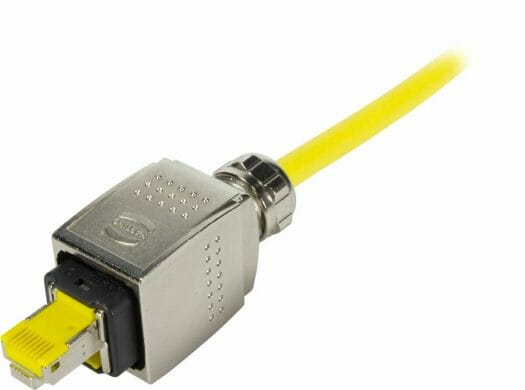 You’ll find additional details on the product page. As one should expect, this type of RJ45 connector is not exactly cheap and listed for $25 and up on Mouser.

I’m quite confused. Not only is looks praticularly complicated and long to assemble compared to what is usually done with a regular plug, but in addition these connectors are huge and will prevent one from connecting to dual-rows switch ports, and even sometimes to high density ports where you don’t have more than a few millimeters of margin between two connectors. This looks like a significant regression in every direction! What I would like to see would be ethernet using a single pair at 250M / 625M / 2.5G with a tiny connector that could be made compatible with RJ45… Read more »

you can make rj45 cables with only a screwdriver https://www.youtube.com/watch?v=Z20ROaFmRC8

Well… 25% sounds like a big deal, but taking 25% from 30 seconds is not so big improvement to invest in it. The price difference on connector is significant and at this point the expenses won’t be covered by time savings.
But always it is nice to see improvements, even in the fields, where we would not expect to see anything new. It might change the way of making RJ45 connectors in the future, when the price will drop.

This is clearly marketed toward management personnel which most likely have no concept of practicality in the field and will just consider the “increased productivity” part of it. It barely saves any time (when you’re getting relatively good at making RJ-45 cables) and even so, you have to carry around a bunch of small parts to assemble a single connector.

I’d pay to see the tech/engineer’s face being handed a bunch of these connectors by some manager, convinced he’s giving him some life changing device!

Good luck getting that chunky pricey (?) connector in tight spaces

I will join the supportive wave of comments too lol. This only happens when a bunch of people with money to make something clearly live in a different dimension from the real world. They defend what can not be defended and say things that have less sense than saying gravity does not exist.

I feel so sorry and also angry, because the title was very promising but I’ve been victim of another clickbait :(. I crimp many cables in my job and it takes me 1/4 of the time than that. What is happening?

That’s cabling as seen by managers 🙂 They’re “optimizing” for non-existing problems and achieve something worse than what they were trying to fix.

Many of the criticisms I read here don’t seem to think of the real problem: an RJ45 plug was not designed to connect a solid cable on (despite the fact that many people do it anyway/everyday); simply speaking a standard RJ45 plug can’t pierce a solid cable.
This connector pitchfork the cable, the same way it’s usually done on a female RJ45, allowing a reliable connection.
Yes it’s bulk and expensive but solves a real problem an is well designed.
Detail, look at image lower right

Would you have an idea what they compare this RJ45 connector to when they say it’s “70% smaller in size”? Because it looks bulky compared to a typical RJ45 connector…

Just saw a photo in a Facebook comment. That must be it. That one is supposed to cost $2 to $3 and is a bit bigger. 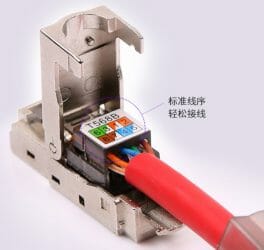 That style of connector is great…for making CAN/CANOpen RJ45 terminators (with 120 Ohm resistors).

The metal, industrial style must have some uses, since somewhere I have a similar-style sample from Siemens from about 20 years ago. And Harting is a well known industrial connector company.

Look here
Most of them are really bulk. Tried some… also unreliable!

At least they look much less bulky than the photos above. However you make a very good point regarding the fact that this type of connector supports single-strand wire. One should never use that outside of walls of course, but when you have no choice this can work. I personally still prefer to end such cables with a female plug since you never know how far the cable will need to go.

These kind of connectors are industry standard since years in Europe. See

I don’t see anything new to them.

Anyway, using them is just math: take the hourly rate what you electrician needs with or without that product. Works in western countries .