Severa USB hacking/debugging boards were launched in 2020 either based on microcontrollers or FPGA with the likes of Tigard (FTDI FT2232HQ), Ollie (STM32F042), Glasgow Interface explorer (Lattice Semiconductor iCE40), or Protocol Droid (STM32).

All those were launched on Crowd Supply, and there’s now another one with LUNA “multi-tool for building, analyzing, and hacking USB devices” based on a  Lattice Semiconductor LFE5U-12F ECP5 FPGA that raised over $100,000 in a few days. 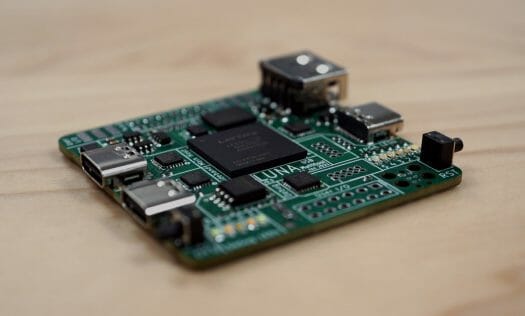 The board is open-source source hardware with KiCAD schematics and PCB layout available on Github together LUNA’s open “gateware”, and can be programmed/used with open-source software tools such as yosys+nextpnr open-source FPGA flow, and the company’s ViewSB software that translates captured USB traffic into a human-readable format, and runs on Linux, MacOS, Windows, and FreeBSD. There’s also a Wiki with developer’s documentation.

LUNA works as a  high-speed USB protocol analyzer out of the box, but can also be used as a USB-hacking multi-tool, USB development platform, or USB reverse-engineering tool, since it’s entirely programmable and more powerful than MCU-based solutions.

One of the reasons LUNA was so successful is that it was designed by the Great Scott Gadgets of HackRF fame, so people know what they are getting into.

LUNA board is offered either as a bare board for $99, or with a CNC-milled, anodized aluminum enclosure for $149. In either case, you’ll need to be patient as shipping is only expected in May 2022.