Cooler Master Pi Case 40 V2 case for Raspberry Pi 4 is the successor of the fanless Pi Case 40 metal enclosure launched in 2020 on Kickstarter. The company also offers 3D files for the case and accessories to expand its functionality. 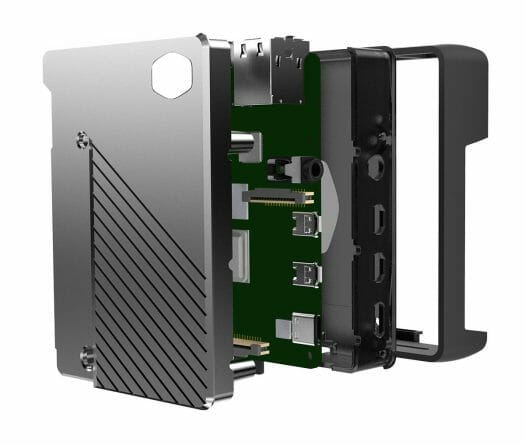 The fanless enclosure ships with four modular mounting brackets, one Allen Key, two Thermal Pads, a 90° GPIO adapter, an ON/OFF switch, and a 40-pin jumper cable. It will not work with most/any other board compatible with Raspberry Pi 4 due to the different positions of the CPU. 3D files for the enclosure, as well as accessories such as an M.2 and 2.5-inch drive attachments, and a DIN rail mount are also provided under a Creative Commons Attribution-NonCommercial-ShareAlike 4.0 International license.

There’s also the Pi Tool to provide a simple GUI to customize the remappable button, monitor the board (CPU & memory usage, temperature…), and overclock the CPU which can be installed as follows:

All those were already offered in the original Pi Case 40, which has now been moved to being a “legacy product“, and won’t show up during a product search. So what has changed exactly? Apparently not much, all I could find was the 40-pin jumper cable (aka ribbon cable) is now included by default, the 40-pin GPIO header’s markings have changed, and there’s now a cover to hide the header when not in use.

Cooler master Pi Case 40 V2 is available through various European distributors starting at 17.90 Euros inc VAT on Electronic Shop 24 (Austria), as well as in Taiwan on Shopee for about $17 and other sites. Additional information may be found on the product page, including the 3D files in the download section.