The new storage standard and device are mostly designed for space-constrained applications ranging from ultra-mobile PCs to IoT devices and various embedded applications that may require fast, removable storage. 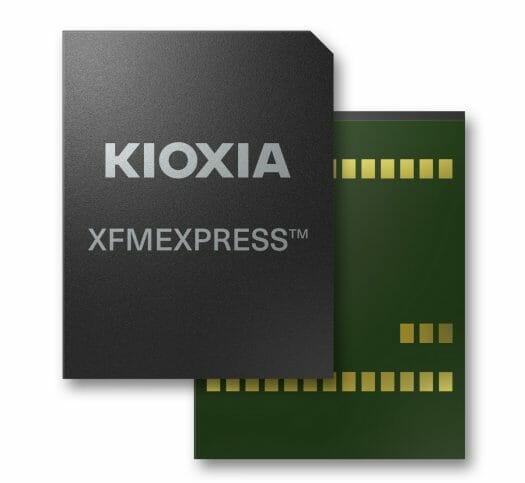 We do not have the full specifications for the XFMEXPRESS XT2, but here are the highlights:

As I understand, the new storage device is meant to deliver much higher performance than microSD cards, while providing a thinner and smaller form factor than M.2 SSDs. combining the best of both worlds. KIOXIA first announced it in 2019, when it was still called Toshiba, but it took three more years to reach production. 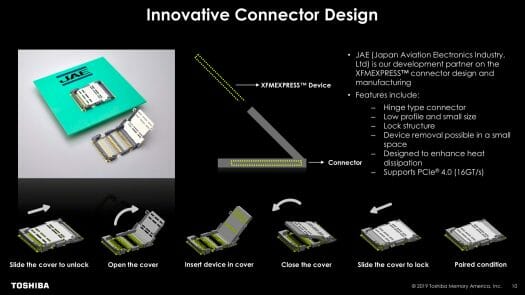 The connector was developed with JAE (Japan Aviation Electronics Industry Ltd), and it works the same way as some SIM card sockets where you need to slide the cover to unlock and open it, before inserting the XFMEXPRESS TF2 module/card, and slide the cover back in to secure it in place. We do have extra specs for the socket itself:

The product page has limited information and most details above are from the press release, plus the 2019 announcement. KIOXIA is currently demonstrating the solution at Interop Tokyo 2022 in Makuhari Messe, Japan, until June 17, and will also showcase it at Embedded World 2022 in Germany on June 21-23, and at the Flash Memory Summit 2022 on August 2-4 in the US (Santa Clara).

The socket is supposed to enhance thermal dissipation, but I’m not sure it will be enough in all cases. Maybe some will add a thermal pad between the SSD and the device enclosure.

Is there any reason not to use that, like bad heat dissipation? Will there be any adoption of SD Express and SDUC (up to 128 TiB cards) at all? I would rather see SD cards improved and not killed off.

Don’t forget there is pressure on sales of lower consumer Cameras, traditionalCamcorders due to Smartphone Camera, Video functions being used more. I suggest that SDcard markets are feeling the reduction in sales. Even though handheld games and TV box sales are doing well.

Yeah I’m sure the removal of microSD in smartphones is crippling sales. Although, I’ve been surprised to see full SD in places like new pre-built desktops, like the Dell Inspiron 3910 for example. Cheap security cameras and dashcams are almost always using microSD, and so on.
But this new form factor in the article is starting from zero.

Have a look at Anandtech’s test from a while back. They got an early card and reader, the card got so hot you couldn’t touch it and that was just SD Express.

In any case, Silicon Motion’s customers can tweak the firmware’s configurable parameters to achieve a different balance between performance and temperature. The SM2708 might also held back a bit by its 28nm fabrication node. Once SD Express achieves scale of deployment, it is likely that Silicon Motion can choose more advanced nodes to drive down the power consumption and stress temperatures.

Also try making the cards out of metal.