Khadas VIM1S is an upcoming low-profile single board computer powered by an Amlogic S905Y4 quad-core Cortex-A35 processor that’s meant to provide an upgrade to the Amlogic S905X-powered Khadas VIM SBC introduced in 2016, and since then renamed to Khadas VIM1.

Khadas has been teasing two new SBCs: the low-end Khadas VIM1S with S905Y4 SoC, and the most powerful Khadas Edge2 board equipped with a Rockchip RK3588S octa-core Cortex-A76/A55 processor.

I have received both as you can clearly see from the photo above :), but I’m only allowed to write about information available publicly at this time, so today I’ll introduce the Khadas VIM1S which looks just like the VIM1 board. 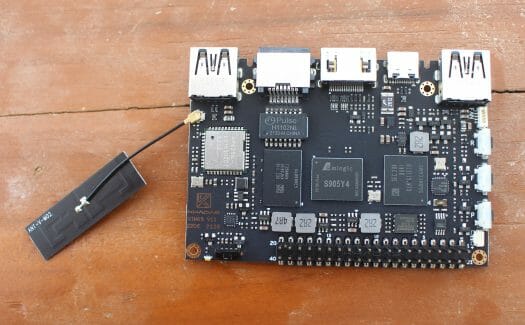 Khadas VIM1S specifications with highlights in bold showing the differences against the VIM1 Pro model:

The company will provide both Ubuntu 22.04 and Android 11 (with Linux 5.4) images for the board through their OOWOW system that conveniently allows the installation directly from their servers. No MicroSD card or USB cable is needed to flash the firmware. 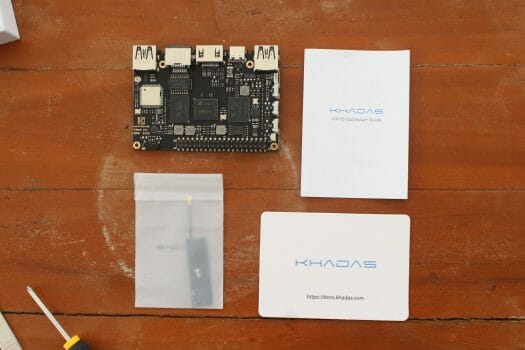 My board just shipped with a Quick Start Guide, an antenna, and a card pointing to the documentation website. The company did not include any heatsink or fan, even though there are mounting holes for the standard heatsink and a fan header, as I believe the board should probably run fine without a heatsink thanks to the ultra-efficient Cortex-A35 cores.

A quick calculation shows a Cortex-A35 processor (1.78 DMIPS/MHz ) @ 2.0 GHz should deliver 3560 DMIPS per core, while a Cortex-A53 (2.3 DMIPS/MHz) @ 1.5 GHz achieves 3,450 DMIPS per core. That does not give the full story, but I expect the CPU performance to be similar between Khadas VIM1S and VIM1 Pro. The Mali-G31 GPU is much more recent than the Mali-450 GPU used in Amlogic S905X, so I’d expect improved graphics performance and compatibility bearing in mind it’s still a low-end part. Memory bandwidth would have to be tested, but the Khadas VIM1S uses faster memory. 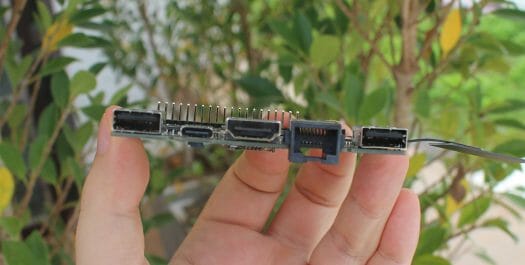 MicroSD cards will have to potential to run faster, and the additional 32MB SPI flash enables network boot and the OOWOW system. Khadas probably makes the thinnest SBCs on the market, and the Khadas VIM1S is no exception thanks to the use of a low-profile Ethernet port that may be important for space-constrained applications such as robotics. The only downside compared to Khadas VIM1 Pro is the lack of a hardware video encoder, and instead, H.264 video encoding is done by software.

Khadas VIM1S is now available for sold for $64.90. Khadas VIM1S review is coming in a few weeks first with Android and then Linux.

Well the S905Y4 has been on sale in TV boxes for quiet a while and elsewhere on your site you have a link to the datasheet. So it is the software that will define this board IMO.

What is this? 2005? Quite dissapointing.

Maybe. But practically it might be sufficient for many usecases. I’ve never really understood what everybody is doing with this boards that requires more speed. There might be load peeks were it is a bit inconvenient, but does it really matter? Otherwise accept that this board is suitable for you. But check the throughput of that board then, marketing happily sells GBit hardware that can’t handle much more than FastEthernet practically.

The rk3328 has usb3 and gigabit Ethernet with excellent mainline support and double the ram. Unless you need av1 or super efficient cores, the rk3328 has amlogic beat here. Years in advance. For a similar price point, I would add.

For Khadas Edge2 can you try mainline linux kernel? (in your review)

Is CNX going to be one of the reviewer?

Yes, the box on the right in the first photo is Khadas Edge2. But Khadas has not released the specs yet, so I’m not allowed to write about it yet. I’ve started testing it today.