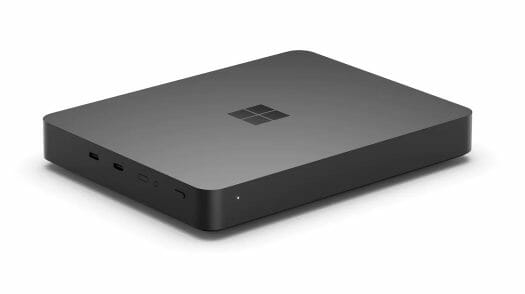 The Windows Dev Kit 2023 mini PC ships with Windows 11 Pro and the package also includes a power supply. Microsoft provides a native Arm64 toolchain with Visual Studio 2022 17.4, runtimes, libraries, and frameworks, and the system is powerful enough to run Arm64 virtual machines, CI/CD infrastructure, and services to build, test, and release code. It is also suitable for AI applications with the Qualcomm Neural Processing SDK.

As a side note, preliminary support for the Snapdragon 8cx Gen 3 was added to Linux 6.0, and more specifically for the Lenovo Thinkpad X13s laptop. Somebody managed to boot an Arch Linux Arm image on the laptop, so it might work on the Windows devkit as well, bearing in mind that many features of the Snapdragon 8cx Gen3 will not be supported.

Microsoft sells the development kit for $599.99 with a one-year limited hardware warranty. The devkit is only available in Australia, Canada, China, France, Germany, Japan, the United Kingdom, and the United States at this time, and if you try to access the shop from another country you may be greeted with a 404 page. I know since I had to use a VPN to access it… Further details may be found in the announcement.

Finally an affordable ARM developer system with a reasonable single-thread performance. I would have said that the M1 Mac Mini was an affordable developer system, but with a maximum of 16GB of memory, you can’t even compile large projects on it. This machine is about 25% slower than the M1, more on par with a Ryzen 5600U, but at least it has 32GB of RAM.

I think its likely we will see an explosion of Arm systems that rival the latest and greatest on all platforms.

The ram of M1 is not really same as other machine. Even with just 16G，I can still browse website when compiling chromium. This is imposible on any other machine with 16G ram.

> Even with just 16G，I can still browse website when compiling chromium.

Running which OS on the machine?

That’s a nice amount of RAM. I hope it ends up on sale, as any laptop would be. But maybe they’ll just run out, IDK.

Also, I’m reminded of the article, Qualcomm 8cx Gen 3: Too dangerous to deploy.

Thanks for mentioning this. Yeah, ‘Microsoft Pluton’ seems really like something you want inside your hardware to allow unknown 3rd parties remote and unlimited access to your data stored on such a crappy platform.

that was a really interesting article. i’m quite disappointed as i thought the lenovo x13s had some potential… apparently not. i’ll have to stick with linux on apple m, unfortunately.

There is an modded debian image that works on some ARM64 windows laptops but its still unclear if these windows Arm machines are Arm System Ready UEFI certified, something tells me they are not as otherwise regular fedora should install which it does on Arm SR systems.

It’s amusing how, when a product is designed to run Windows, all its base specs are suddenly inflated by an order of magnitude (RAM, storage, CPU cores etc). If that could allow more powerful product to appear on the market, that would be great. The downside is that raising standards will also mean raising the crappy development standard and will make all of them slow again.

Windows RAM requirements have plateaued in recent years as RAM cost/density stagnated. The industry is still selling Windows laptops with soldered 4 GB today even though most people would recommend going to 8 GB, and I was using 8 GB in 2011. Developers can benefit from going to 32 GB, and that’s who this is for, being a “dev kit”. The CPU is just relatively powerful compared to SoCs like the RK3588, but the technology lags behind the latest smartphone SoCs. The Cortex-X1 and A78 are cores from 2020, and are not even ARMv9. Including 4x Cortex-X cores is part… Read more »

Qualcomm doesn’t officially support linux, does it? We are waiting ARM laptop for soooo long. x13s on 8cx gen 3 is a gift from gods, but… NO LINUX SUPPORT, ARE YOU KIDDING ME?

Ooh I’ll pick one up. I’ve been wanting to try windows on arm for a while but the hardware required has either been very slow (raspi4) or expensive (thinkpad x13s is over £1k). I wonder how WSL and WSA run on it, plus a few low end games.

I’ve had an hour to play with it and it’s weird. Feels like the TDP is cranked all the way up, I managed about 30-40W peak draw. x86 apps were broadly fine, hwinfo64 reported sse4.2 but not avx. I tried vivaldi, steam, discord then some games: HL2, CSGO, deep rock galactic and persona 5 royal. HL2 and DRG were playable but DRG started crashing in windowed mode. CSGO ran too slowly to be playable and persona 5 crashed on launch.

Hopefully tomorrow I can get Arch installed under WSL2

Windows Mobile 6.5, Windows Phone 7, Windows RT… MS betrayed them all. Who want to be next?

Benchmark results made with Linux running inside WSL2 flew in: https://github.com/ThomasKaiser/sbc-bench/blob/master/results/Sorted-Results.md#7-zip-mips-single-threaded

The memory controller of this SoC is impressive resulting in extremely high 7-zip scores for the Cortex-X1C but of course the “Microsoft Pluton” rootkit implementation prevents deployment of devices based on this SoC.