Clockwork’s uConsole is a modular handheld computer with a 5-inch display, a built-in keyboard, and based on a carrier board supporting various Arm or RISC-V modules compatible with the Raspberry Pi CM3 or CM4 form factors.

The device is offered with a system-on-module with up to 4GB RAM, a WiFi 5 and Bluetooth 5.0 wireless module, features micro HDMI video output, USB ports, and an audio jack, plus expansion connectors for more advanced users, and takes two 18650 batteries for power. The company also offers a 4G LTE module for cellular connectivity. 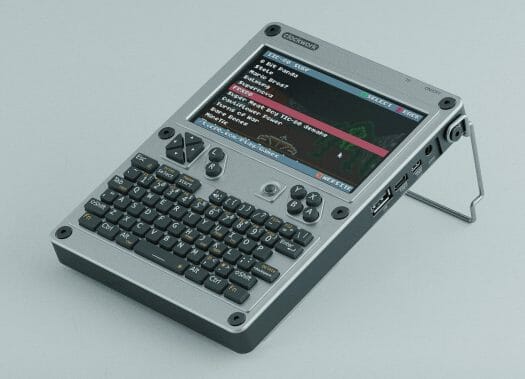 The company offers four modules for the ClockworkPi carrier board:

Those are the exact same module found in the company’s DevTerm portable Linux terminal.

Other components of the uConsole include a 5-inch display with 1280×720 resolution, a QWERTY Backlit keyboard with 74 keys, a stereo speaker, a battery module holding two 18650 LiPo batteries, and a metal enclosure. A 4G/LTE cellular “Ext. module” supporting LTE Cat. 4 for up to 150/50 Mbps DL/UL speeds is also offered as an option. 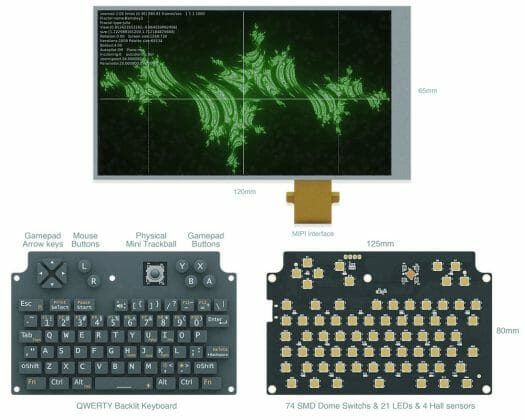 Clockwork says the uConsole can run ClockworkOS, Debian, Ubuntu, or Raspberry Pi OS, and they’ve tested gaming programs such as Pico-8, TIC-80, DOSBox, and RetroArch on the device, as well as programs such as Chromium and LibreOffice. The RISC-V module is not recommended for beginners since it lacks a GPU and software support is in progress. We are told all resources are on GitHub, but I could not find any reference to uConsole on the company’s account, so I’d assume it will be done later on.

The company is taking pre-orders for the uConsole starting at $139 with the RISC-V module and up to $209 with the Rockchip RK3399 module with deliveries expected to start within the next 90 days. Further details may be found on the product page.

I miss the pocket C.H.I.P and its low price tag for this use case. Too bad the company died.

According to the website, it seems like there is just the american keyboard available, no country specific layouts. Which is really sad, as this would be exactly what I wanted 🙁

Radio/Modem with DMA access to system board, or a serial (AT cmdset) line?

Optional case for 4x 18650 would be nice.
If you’re driving some external USB stuff, a 4x option would be much preferable. That’d get into realistic 10000mAh @ 3.7v.
Many applications for such a ‘swiss army knife’ will not just be sipping power in bursts, like android/iOS toys do.