The third prize of this year’s giveaway week comes courtesy of ELECFREAKS which offers a Cutebot Pico:ed kit based on the Pico:ed board with a Raspberry Pi RP2040 microcontroller and following BBC Micro:bit form factor. 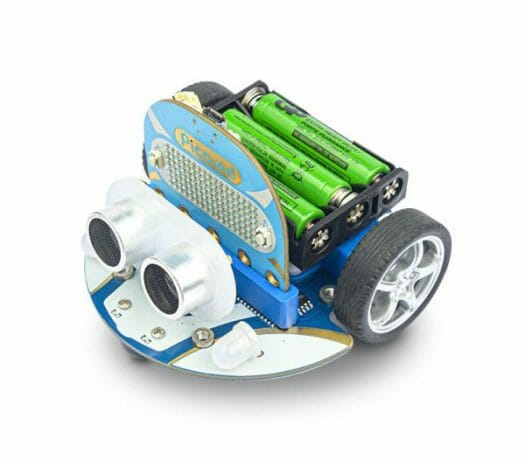 The company initially me asked me if I wanted to review the board/robot, but since I may not have the time to do so, I asked whether they wanted to be included in our yearly giveaway week which they accepted.

The company provides instructions to program the robot with “Micro block” visual programming IDE, C++, and CircuitPython. You’ll find resources to get started and eight projects for the robot in the Wiki.

Besides one Cutebot Pico:ed kit, ELECFREAKS will also give away one Pico:ed board to the runner-up, and possibly more if the giveaway is popular. If you live in Thailand, you can also enter to win one Pico:ed board on CNX Software Thailand.

Good luck to everybody entering the contest. ELECFREAKS sells the Cutebot Pico:ed Kit for $47.90 and the Pico:ed board V2 for $12.90.

United States. This would be fun to do with the kiddos!

Thanks again from Australia!

It looks cute, greetings from Brazil.

India… Its a simple design. It feels interesting.

Can use it.
Israel

United States.
Thanks, look like a cool project for kids (and adults!)

Montana, United States. My kids would like this. Good luck to everyone.

Great toy for the Kids.Czech Republice.

France
A fun to play with it.

Iran
Let teach our kids programming with this cute robot.

Hey from Latvia.
Looks like good toy for my son … and me as well 😉

Iran
For my kids

Let it come to Germany!

a tech guy from Brazil

United States.
Would be great for my kid

Hello again from Brazil!
My son loves those robots, and I love building them with him.

Ireland – I like the micro bit form factor and that you can use Micropython, should be easy enough to add Circuitpython support as it use already supported RP2040

USA. This looks so cute.

United States… yeah, this would be interesting to see if my kids enjoy such things!

France! May be electronic teaching to my son?

USA.
A robot would be awesome to build.

Singapore. Nice to have it

This would be fun for me and my daughter to do. Greetings from the USA!

Cute. From the USA.

Hello from the Czech Republic

United States. I would love to build this little guy.

Hello Jean Luc, thanks for all the nice reviews. Australia

USA. It would be fun to program this robot!

I’m from Germany and due to courses at my university I’m extremely interested in MCUs and programming these.

I’m from Germany and due to courses at my university I’m hyped about MCUs and programming these.

Sweden
I love all these cool projects