Arduino has recently announced the Opta micro PLC with industrial IoT capabilities adding yet another solution to the Arduino Pro family.

Arduino used to focus on the hobbyist crowd, but with the launch of the Arduino Pro family in 2020 starting with the Portenta H7 board, the company switched its main focus to the more profitable enterprise market. Since then they’ve launched several other boards designed in-house, and last year started collaborating with the introduction of the Arduino WisGate Edge LoRaWAN gateways based on RAKwireless hardware. The Arduino Opta is another one of those collaborations as it was designed together with Finder, who calls their devices PLR (Programmable Logic Relays). 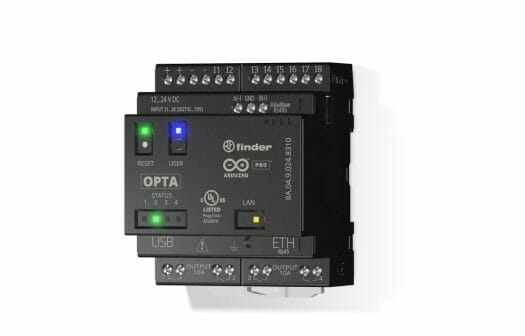 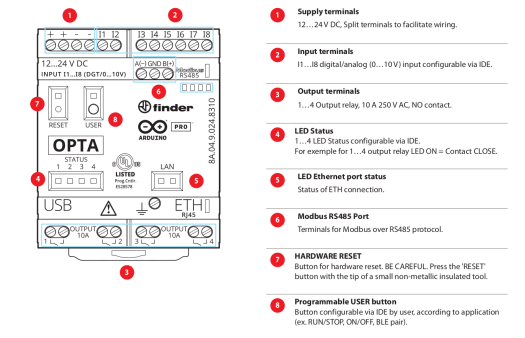 Three models will be offered: the Opta Lite (8A.04-8300) will all default features, the Opta Plus (8A.04-8310) adding the RS485 ports, and the Opta Advanced (8A.04-8320) with both RS485 and a wireless module for WiFi and Bluetooth LE. The main uses case include industrial automation (Industry 4.0), building automation, and Smart Cities infrastructure,

The micro PLC/PLR supports both traditional PLC languages such as LADDER, FBD, or other IEC/EN 61131 languages that usually require a license, and the free Arduino 2.0.0 IDE with a range of open-source libraries. Another advantage of Finder’s partnership with Arduino is support for the Arduino IoT Cloud dashboards for real-time remote monitoring and OTA firmware updates. You’ll find more technical details on Arduino’s documentation page or Finder’s website.

The Arduino Opta was unveiled at SPS Nuremberg 2022 on November 8-10, and pricing is not available yet, and you’ll need to subscribe to a mailing list (or follow CNX Software) to get notified of the launch.

The link to register your interest is at the end of the post.

Hi,
C programming language can be used in this device as has been used in Arduino board????

It’s my understanding you can use the Arduino language with this PLC, but I’m not entirely sure it supports all the same features as traditional PLC languages.