Banana Pi BPI-M6 is an upcoming credit-card single board computer based on SenaryTech SN3680 SoC comprised of a quad-core Arm Cortex-A73 processor, a Cortex-M3 real-time core, an Imagination GE9920 GPU, and an NPU delivering up to 6 .75 TOPS.

The board will ship with 4GB LPDDR4 RAM and 16GB eMMC flash. Its layout is fairly similar to the one of the Raspberry Pi 4 with four USB ports, Gigabit Ethernet, a 40-pin GPIO header, a USB Type-C port for power, and two micro HDMI ports. However, only one of those is for HDMI output, as the second is for HDMI input, and there’s also an M.2 socket for expansion. 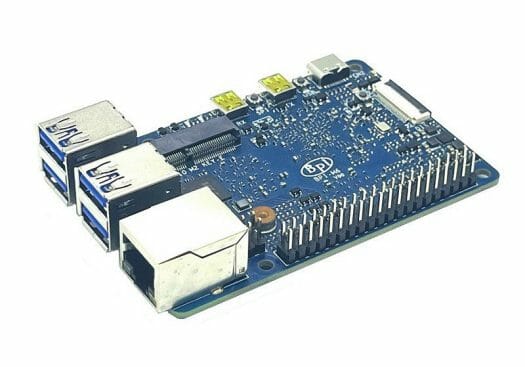 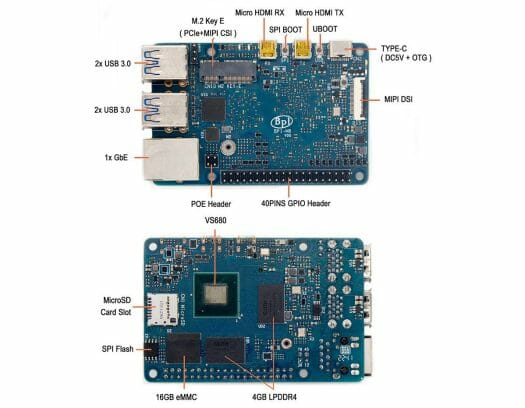 Banana Pi will eventually provide Android and Linux images for the board, but at this time, the information on the wiki is rather sparse. The company keeps referring to the processor as the Synaptics VS680, but it was pointed out to us that it should be the SenaryTech SN3680 with basically the same specifications, and an article in Chinese mentions a three-way partnership between Synaptics, SenaryTech, and SHIXI which should explain this.

The VideoSmart VS680 is the fastest IoT processor in AI benchmark rankings, beating Qualcomm QCS605 and NXP i.MX 8M Plus processors, but the usefulness of the list is questionable as processors such as Amlogic A311D and Rockchip RK3566 are shown to be or be tested without an AI accelerator despite having one. While I could not find a Linux tree for the VS680, there’s some activity in the Linux kernel mailing list.

Banana Pi did not provide any availability or pricing information for the BPI-M6 SBC, and they tend to announce their boards well in advance, so I would not be surprised if the company only starts selling it by the middle of 2023. Yet, it’s still interesting to find out about another AIoT processor.

“will eventually provide Android and Linux images for the board” sound scary :p

From the player in question? It’s not sounding…it IS scary. X-D

That being said, I’ll reserve judgement. If the player making the SoC will work a smidge with the community, it might be “okay” or better. Big IF.