PICO DEV M3 is a round-shaped development board based on a Raspberry Pi RP2040 dual-core microcontroller and serves as a magnetic rotary encoder with a few 3D printed parts.

Designed by Ahmsville Labs, the board comes with 2MB QSPI flash, various through holes for GPIOs, a USB-C port, and the magnetic rotary encoder supports up to 36,000 steps per revolution and comes with 18 individually addressable LEDs. 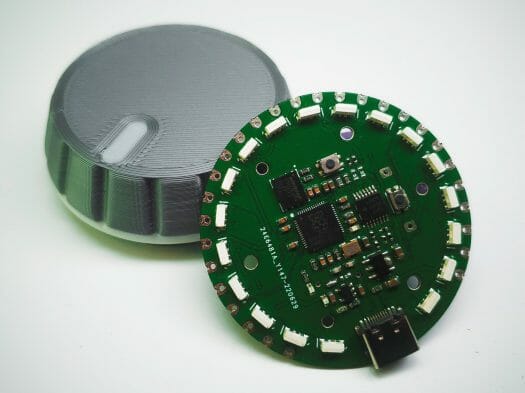 The board is programmable with the Raspberry Pi RP2040 C/C++ SDK or MicroPython, and you’ll find code examples and the 3D STEP files for this specific design, and other rotary encoder designs from Ahmsville Labs on GitHub. It’s not the first Raspberry Pi RP2040 board with one or more rotary encoders we’ve covered, as we wrote about the ANAVI Macro Pad 10 & Knobs input devices programmable with CircuitPython last month.

The PICO DEV M3 development board is selling in limited quantities on Tindie for $21.10 without the rotary encoder or $33.20 with it. It ships from either Nigeria, where the board has been designed, or the United Kingdom.