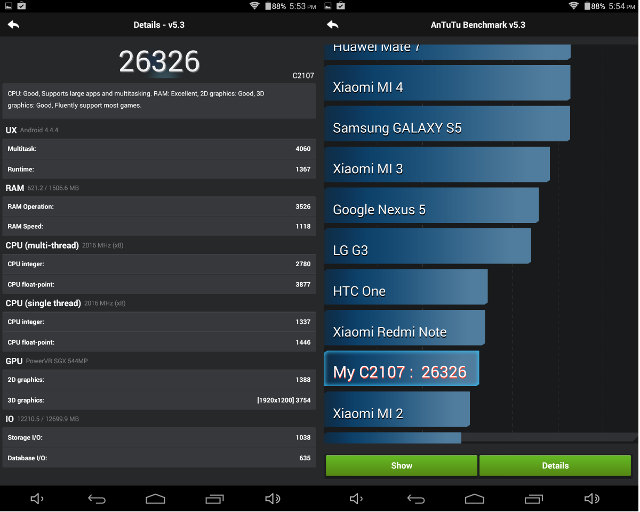 I’ve already shown some pictures, listed specs and reported Antutu benchmark results for Infocus CS1 A83 Android tablet powered by Allwinner A83T octa core processor. I’ve been using this tablet as my main mobile device for about a week, and for about 3 to 5 hours a day, and I’m now ready to write a full review reporting my experience with this Full HD tablet. General Impressions I mainly use a tablet to browse the web, check emails, play some casual games like Candy Crush Saga, watch some YouTube videos, and Skype calls, and I could not really fault the tablet for any of these applications. Having said that, my reference device is only ThL W200 smartphone powered by Mediatek MT6589T processor with a 5″ display @ 1280×720, and for all the tasks listed Infocus tablet is much better because it’s more responsive, the 1920×1200 is crisp, and the cameras are working (for now). I could get a GPS fix […] 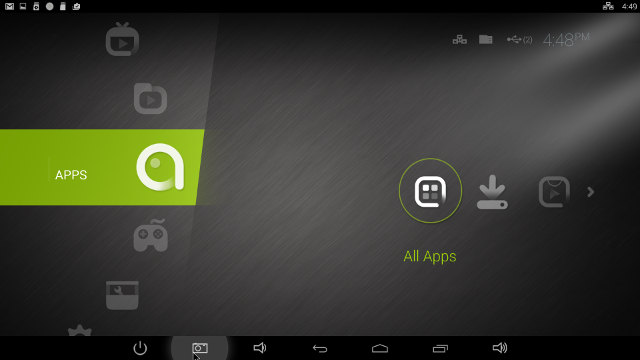 Open Hour Chameleon is yet another Rockchip RK3288 based Android TV box, but it comes with aluminum enclosure, and boots from SD card instead of internal storage like all other devices I’ve seen on the market so far. Cloud Media (previously Syabas) also have a long history of making Linux based media players based on Sigma Designs processor, and when I worked on IPTV products, we used their PopCorn Hour has comparison platforms. So we should probably expect some interesting customization and features from the company. I’ve already posted pictures of Chameleon box and its board, so today, I’ll focus on reporting my experience with Android 4.4, and later I may also try their Lubuntu image. First Boot, Settings and First Impressions Normally I quickly try the remote control, and get it out of the way. But this time, I’ve spent a little bit more time with the remote since they user interface is designed for the remote, and it […] 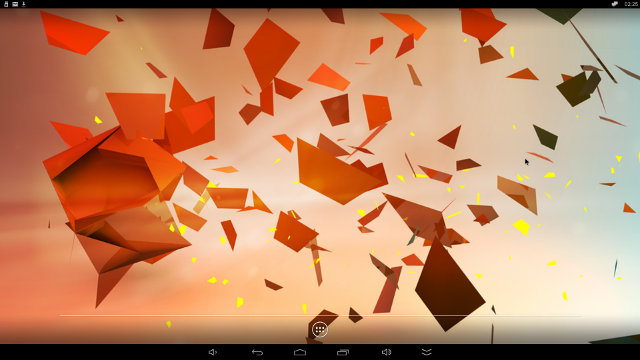 Tronsmart Draco AW80 (click for full specs) is the first octa core Android TV box / mini PC thanks to Allwinner A80 processor. Draco AW80 Meta model comes with 2GB RAM / 16GB eMMC, and the upcoming Draco AW80 Telos will feature 4GB RAM and a 32GB eMMC. Geekbuying sent me the Meta version for review, and since I’ve already posted pictures of the device and board, today I’ll post my findings after testing the unit. First Boot, Settings and First Impressions I’ve inserted two AAA batteries in the provided remote control, and it works as expect, but as usual, I’ve used Mele F10 Deluxe air mouse to control the device during my testing, since it’s impossible to use most apps with an IR remote control, XBMC/Kodi being one exception. I’ve connected an HDMI cable, a USB 3.0 hard drive to the USB 3.0 OTG port of the TV box, an Ethernet cable, a USB webcam, inserted an SD card, […] 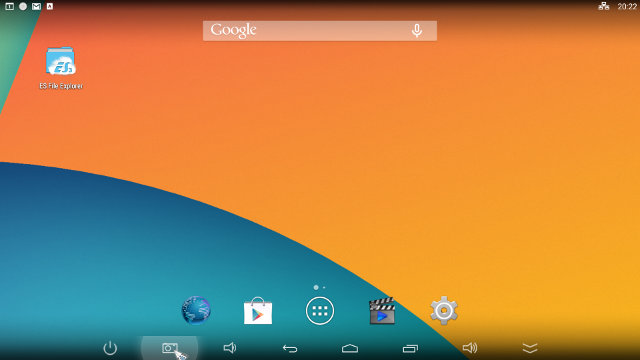 It’s been a little while since I unboxed Tronsmart Orion R28 Meta Android TV box, but since the product was still consider “beta” by GeekBuying, I wanted to wait for a OTA firmware update (109k4), which was released at the beginning of the week. Since I’ve already listed the technical specifications, and showed pictures of the board and device, I’ll focus on feature tests and benchmarks results in the review. First Boot, Settings and First Impressions I quickly tried the basic infrared remote control, inserting two AAA batteries, and it does the job, but for Android, you really need a pointing device, so I switched to Mele F10 Deluxe air mouse during testing. I’ve connected a whole bunch of cable, and peripherals to the box including an HDMI cable, a USB hard drive, an Ethernet cable, a USB webcam, and a USB hub with RF dongles for my air mouse and gamepad, and USB flash drive. When you connect the […] 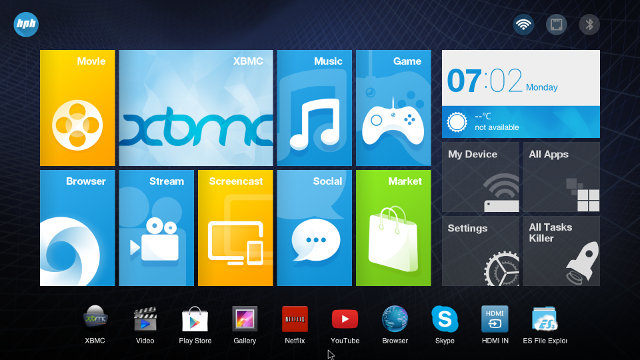 Last week-end, I finally received TP-Link TL-WDR7500 router (Chinese variant of Arched C7) router, so I could complete my review of Nagrace HPH NT-V6 including 802.11ac Wi-Fi. I’ve already listed the specifications, and taken a few pictures of the device and the board, and today I’ll focus on the test results. I’ll start by giving my first impressions, going through the user interface and settings, before testing video playback, as well as benchmarking networking, storage and overall system performance, playing some games, and testing most hardware features of this mini PC. First Boot, Settings and First Impressions A simple infrared remote control is provided with the device, and I’ve quickly tried it by inserting two AAA batteries, and it works fine, but for the rest of testing I switched to Mele F10 Deluxe air mouse to control the device, as it’s much more user friendly than any IR remote. Before booting up the device, I’ve connected an HDMI cable, a […]

Amlogic S805 is a quad core Cortex A5 processor for entry levels Android media players, S802 is a quad core processor with faster Cortex A9 cores clocked @ 2.0 GHz, and S812 is an upcoming upgrade of S802 with HEVC/H.265 hardware video decoding, and Gigabit Ethernet support. I’ve already written about the features differences between AML8726-MX, S802, S805, and S812, but since I now have some devices I can make direct comparison between S802 and S805. It’s quite clear on paper than S802 should be significantly faster than S805, so the only question to answer is by how much, but I’ve been asked to do it, and it could be a fun exercise.  The hardware devices used for the comparison are two Android media players: EM6Q-MXQ for S805 and Probox2 EX for S802, and I used the results from three Android benchmarks: Antutu 5.1, Vellamo 3.x, and 3Dmark Ice Storm Extreme. Let’s go straight to the results. Amlogic S805 Amlogic […] 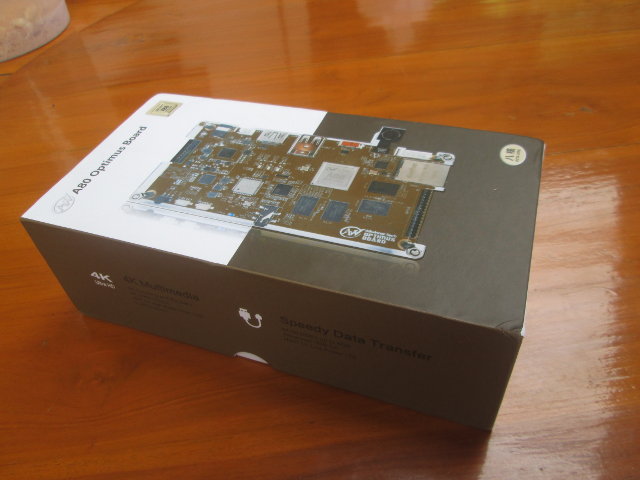 A80 OptimusBoard is a development board featuring the latest AllWinner A80 SoC with 8 ARM Cortex A15/A7 cores in big.LITTLE configuration, and a PowerVR GC6230 GPU. Availability was announced about 2 weeks ago for $345, but partially thanks to reader comments on CNX Software, Merrii Technology decided to lower the price to $169 (and $50+ for shipping) to stay competitive against similar boards such as Hardkernel ODROID-XU3. I’ve now received a sample for evaluation. I won’t go again through the specs, but today I’ll take a few pictures of the board, and provide benchmark results to compare them to the ones I got with Rockchip RK3288. Normally, I would also play with the SDK provided with the board, but sadly (and amazingly), there’s currently no such SDK for A80 OptimusBoard, except a leaked Linux SDK which failed to build with recent tools and operating systems. A80 OptimusBoard Pictures I’ve received the board via DHL from WITS Technology in the following […] 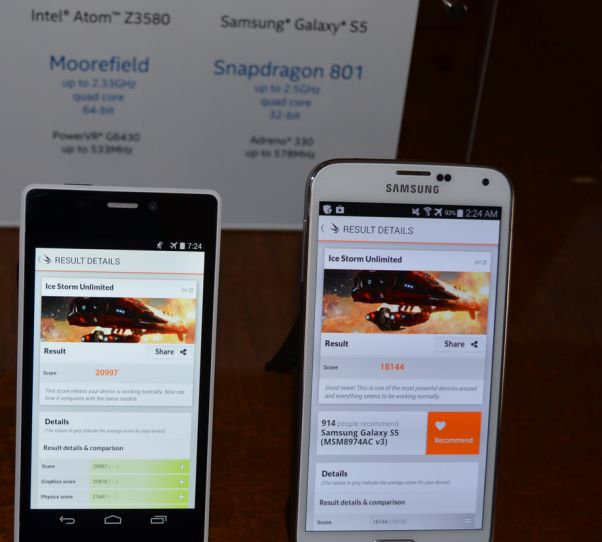 This is not exactly an independent benchmark, as Intel provided the results showing an Intel Atom Z3580 SoC with PowerVR G6430  @ 533 MHz outperform a Snapdragon 801 with Adreno 330 GPU @ 578 MHz (Galaxy S5) in FutureMark’s 3DMark benchmark by 20997 to 18144, or a little over 15%.  We’ve seen several CPU benchmarks before where Intel often has a edge over ARM based solution, but the previous generation with Intel Graphics was a bit weak on the graphics side, and this test seems to confirm, the new Intel smartphone SoC should provide very good graphics performance. It appears Atom Z3580 might have also outperformed Snapdragon 805 with Adreno 420, as Anandtech reported an overall score of 19,698 in 3Dmarks with Qualcomm Snpadragon S805 mobile development platform (MDP), and noticed it was not the most GPU intensive test there is. So it’s still possible the higher score found on Intel’s smartphone reference design may be highly CPU bound, and more […]