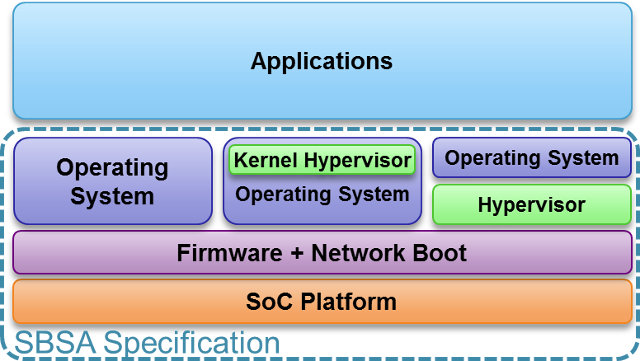 64-bit ARM based servers should hit the market later this year or earlier in 2015 with SoCs such as Applied Micro X-Gene or AMD Opteron A1100. ARM still has the lead in terms of efficiency with a lower dollar per watt ratio, but Intel is closing in with their new Avoton server-on-chips. However, there’s one aspect where Intel is clearly in the lead: standardization and compatibility. ARM is very flexible, and allow SoC designers to create more or less what they want, but it comes at the cost that most ARM based systems are not capable of running mainline Linux, and instead use vendor trees.  With many applications, that may not be critical, but when it comes to data-centers, companies want to be able to run the latest Linux version with the latest security patches as soon as possible, and want to lower the total cost of ownership (TCO), so they don’t want to spend considerable resources to handle different […] 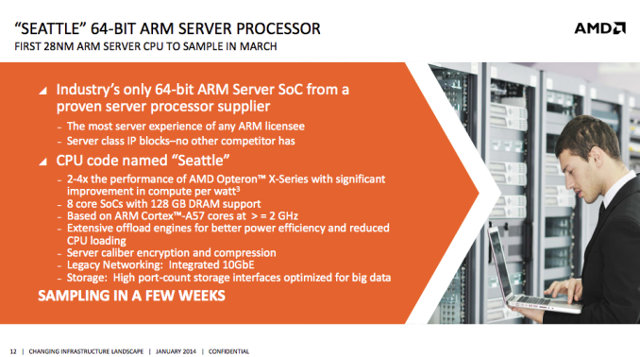 A few months ago, AMD published a roadmap showing AMD “Seattle” Server CPUs based on ARMv8 64-bit architecture were planned for H2 Q2014. The company has now announced the first series of processors that will be based on ARM Cortex A57: AMD Opteron A1100 Series, as well as the corresponding development platform at the Open Compute Project Summit in San Jose, California. Key features of AMD Opteron A1100 Series processors: 4 or 8 core ARM Corte-A57 processors Up to 4 MB of shared L2 and 8 MB of shared L3 cache Configurable dual DDR3 or DDR4 memory channels with ECC at up to 1866 MT/second Up to 4 SODIMM, UDIMM or RDIMMs 8x lanes of PCI-Express Gen 3 I/O 8x Serial ATA 3 ports 2x 10 Gigabit Ethernet ports ARM TrustZone technology for enhanced security Crypto and data compression co-processors On the software side, the company mentionned it is a member of the Linux Foundation and Linaro, and that several […] 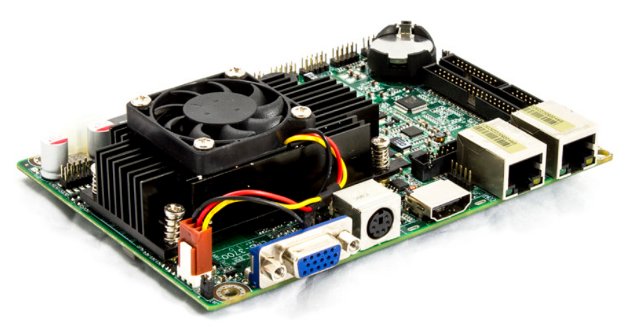 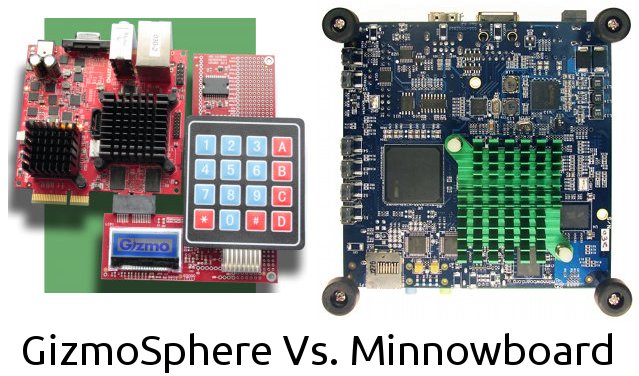 The Gizmo Explorer Kit is an embedded kit based on a development board powered by AMD G-Series G-T40E dual core APU that’s available since the beginning of the year. The Minnowboard is another new x86 embedded board, but this time based on Intel Atom E640 processor. Both cost $199, so a side-by-side comparison might be useful,and GizmoSphere team released a comparison table for both board, and is offering free shipping for the week with “Sharkweek2013”. Let’s have a look. The company only provided the table in image format, so I’ll reproduce it “as is” below, and see if there may be some correction or addition afterwards, the table has been designed by one of the competitors. The parts in yellow are supposed to highlight advantages of the GizmoShpere against the Minnowboard, but they conveniently “forgot” to highlight advantages of the Minnowboard. [Update 13/08/2013 – Gizmo guys have updated their table (shown below) based on feedback, and added green highlights when […] 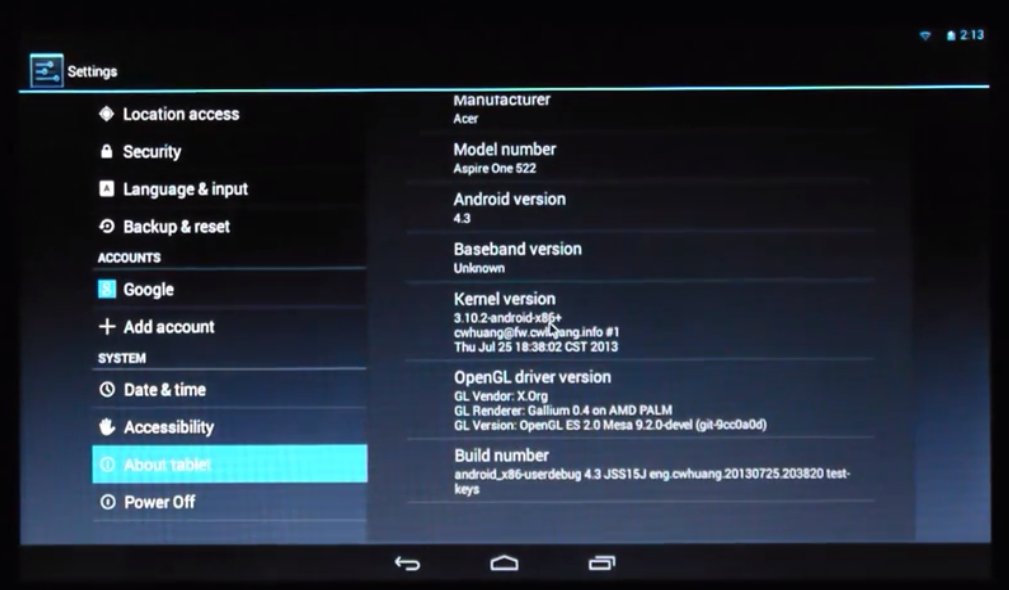 Android-x86 project has been working on porting Android OS to Intel and AMD Desktop PC and Laptop, and just about a week after Android 4.3 has been released in AOSP, the project’s team has already managed to provide an Android 4.3 x86 test image for desktop and laptop, probably helped by the recent push by Intel to have Android device powered by x86 processor. The test build (20130725) is based on Android 4.3 release (Jelly Bean-MR2 branch), and they’ve modified parts of the code to make it work with x86, especially on x86 tablets and netbooks. What’s impressive is that most of features appear to work, and they’ve almost managed to add some additional features. The key features in this release are Upgrade to the latest kernel 3.10.2 to support more drivers. Upgrade Mesa OpenGL ES library to 9.2-devel branch to support hardware acceleration for AMD Radeon and Intel chipsets (not included chips with PVR). Support Bluetooth. Support arm translator. Known […] 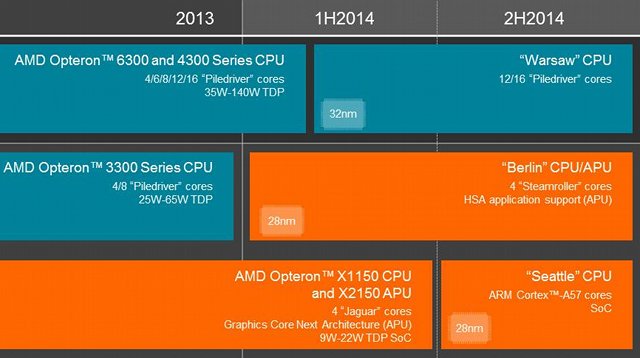 AMD has published a roadmap for the rest of 2013 and 2014 for its server processors, and among all the x86 “Jaguar”, “Warsaw” and “Streamroller” CPUs, there’s an “oddity” with the “Seatlle” processor featuring up to 16 ARM Cortex A57 cores using ARMv8 64-Bit architecture. “Seattle” will come with either 8- or 16-core CPU with ARM Cortex-A57 cores clocked at 2GHz or greater, and is expected to offer 2 to 4 times the performance of AMD Opteron X-Series processors (x86 APU SoC) with improvement in compute-per-watt.  “Seatlle” will handle up to 128GB DRAM, use offload engines for better power efficiency and reduced CPU loading, provides server caliber encryption, compression and legacy networking including integrated 10GbE. “Seattle” samples are expected to be available in Q1 2014, with production in H2 2014. Via Liliputing Jean-Luc Aufranc (CNXSoft)Jean-Luc started CNX Software in 2010 as a part-time endeavor, before quitting his job as a software engineering manager, and starting to write daily news, and […] 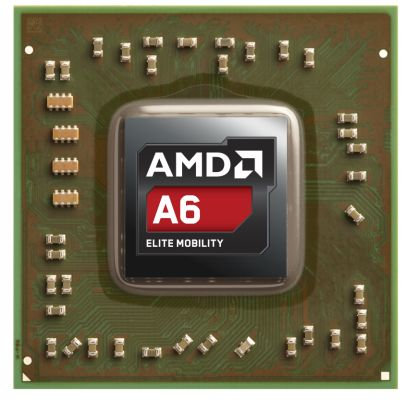 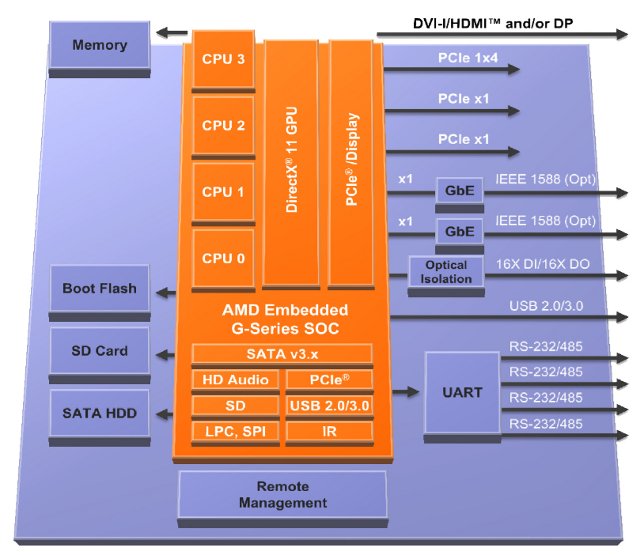 In 2011, AMD launched the G-Series APUs (Accelerated Processing Unit) that combines the CPU and GPU into one chipset which then connects to a controller hub to handle I/Os, and recently the company announced AMD G-Series SoC at Design West 2013. The new solution combines a “Jaguar” CPU, a Radeon HD8000 series GPU and a controller hub into one and only SoC, further integrating functions. Both AMD G-Series APU and SoC target embedded systems such as industrial control and automation, digital signage, electronic gaming systems, SMB storage, IP-TV, medical and network appliances, set-top boxes and more. AMD claims G-Series SOCs offer up to 113 percent improved CPU performance compared to G-Series APU, and up to a 125 percent advantage compared to the Intel Atom (Dhyrstone, EEMBC CoreMark). The platform also includes support for DirectX 11.1, OpenGL 4.2x and OpenCL 1.2 yielding up to a 20 percent graphics improvement over G-Series APUs and more than 5x advantage over Intel Atom (3DMark06 […]