Amazon unveiled its first Android tablet yesterday called the Kindle Fire. The Kindle Fire seems to have similar hardware specifications as the RIM PlayBook. The Amazon tablet is powered by a Texas Instruments OMAP 4 dual core processor, features a 7″ capacitive touchscreen, using IPS (in-plane switching display) technology with 1024×600 resolution,  8GB of flash storage, WiFi support, a Micro-USB port, top-mounted stereo speakers and a stereo headphone jack. The Kindle Fire apparently lacks a microSD or SD slot, does not support 3G and does not have camera. It measures 191 x 119 x 11 millimeters and weighs 413.9 grams. When Wi-Fi is disabled, the battery will last for up to eight hours of continuous reading or 7.5 hours of video playback. The good news is that it will be sold for 199 USD.  It’s 100 USD cheaper than the (already cheap) Archos 80 G9 with a similar hardware, although […]

After India and the US last month, Google will organize Android Developer labs sessions in Europe to train developers to optimize their applications for Tablets. Registration is now open for the following European cities: Berlin — September 28 and 29. London — October 3 and 5. Paris — October 27 and 28. Sometimes late October…, but you can register now. This ADL series isn’t another set of introduction-to-Android sessions, nor any other kind of general overview like you may have at Google Devfest. It’s specifically aimed at optimizing Android applications for tablets, in particular creating high-quality tablet applications to provide a polished user interface and an enjoyable user-experience. Registration is open to anyone, but as Google can only accommodate a relatively small number of attendees, they will select attendees who already have an high quality Android app with the potential to be a top-tier tablet app. This series of labs will teach you: The best practices […]

Archos announced that Archos G9 Tablets are now available. There is of course a caveat to this… Only Archos 80 G9 Tablet can be purchased on Archos Store (limited availability) for 299.99 USD, all other models show the dreaded icon “Coming Soon”. However, all Archos G9 models can be pre-ordered on Amazon France but they are not yet available on Amazon US. The other disappointment is that the Turbo versions appear to have been clocked down to 1.2 Ghz, whereas they were previously announced at 1.5 Ghz. Having said that, if you click on “Product Information” on Archos website, it still says “ARM dual-core CORTEX A9 OMAP™ 4 up to 1.5 GHz”. There is also still a lot of confusion about the amount of RAM in the device 512 MB or 1 GB as this is not shown in the specifications. That’s quite a mess, it’s  confusing and somewhat frustrating. […]

Intel officially announced it will collaborate with Google to optimize the Android OS for Intel’s Atom processor platform in order to help Intel entering the smartphone market. In his keynote on the 13th of September – the first day of the Intel Developer Forum 2011 – Intel CEO Paul Otellini announced the partnership with Google to support Android on Atom processors and said the first Intel-based smartphones will be available in the first half of 2012. Paul Otellini demoed Intel’s Android smartphone reference platform running Android 2.3 (Gingerbread). The phone is 9.5mm thick, had an HDMI output, NFC support and features Intel’s 32nm Medfield processor which is said to include a newer generation GPU. Intel also showed off the new ISP (Image Signal Processor) capabilities in Medfield which is capable of capturing up to 20 fps at 1600 x 1200. However, the reference platform could only deliver 10 fps from […]

Earlier this May, Ziilabs announced the ZMS-20 dual core processors targeted at Android Honeycomb tablets. They have now unveil the 3rd generation of Android Tablet reference designs based on ZMS-20 and ZMS-40 called Jaguar3. Here’s an excerpt of the press release: ZiiLABS, a pioneering media processor and platforms company (a wholly-owned subsidiary of Creative Technology Ltd), today introduced its JAGUAR3, the most powerful 3rd Generation Android 3.2 tablet series. JAGUAR3 is a series of ultra-slim, ultra-lightweight and stylish 10.1” tablet reference designs targeted at the OEM markets. With over a decade of designing experience in portable mobile devices, Creative provided the ergonomic and sexy design of this series of JAGUAR3 tablets. ZMS-20 StemCell Processors JAGUAR3’s superior performance, low power consumption and rich feature set comes from the dual-core 1.5GHz ARM Cortex-A9 based ZMS-20 StemCell Processors. ZMS-20 has another 48 StemCell Processing cores within, which effectively make it into a 50-core processor. […] 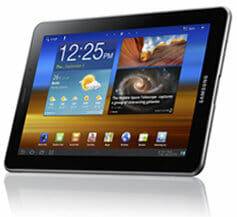