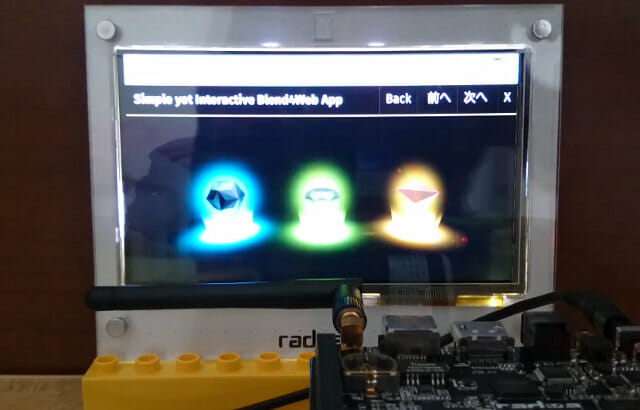 Radxa Rock Pro is a development board powered by Rockchip RK3188 quad core Cortex A9 processor, and although 2D/3D graphics acceleration via Mali-400MP4 is shown to be possible in Linux with tools like es2gears and glmark2-es2, full integration is seldom worked on, and things like WebGL may not work in web browsers. But thanks to the work of naobsd and MatchStick team, Firefox OS has been ported to this Rockchip development board, and as you’ll see in the video below, some WebGL demos work amazingly well. The hardware setup for this demo is comprised of Radxa Rock Pro development board, a 7″ LCD display with touchscreen, and some lego bricks :). WebGL demos can be found @ https://developer.mozilla.org/ja/demos/tag/tech:webgl, so you could try your own platform to see how it performs. If you own a Radxa Board Pro (or Lite), you can even build Firefox OS by yourself by following the […] 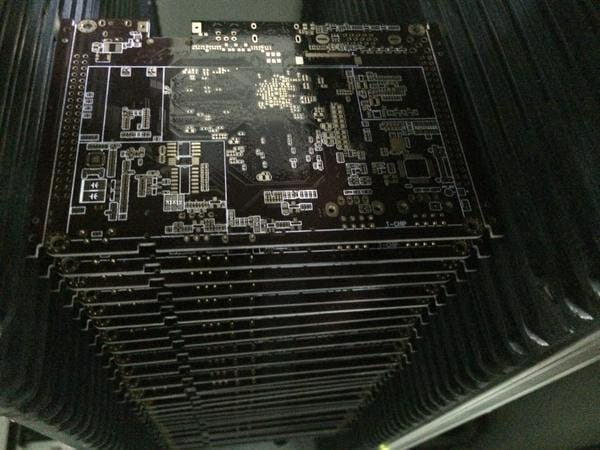 Firefly-RK3288 development board has been an interesting, yet confusing story, at least to me. We’ve first heard about the Firefly board on July, but I was privately told in September that the board would only be sold in China by a T-Chip sales person, only to see it become available for $189 on Ebay, as well as on Taobao a few days later. But those first boards may have only been engineering sample, or more likely from a limited trial runs, as the company has now announced mass production had started. Let’s refresh our memory with the specifications: SoC – Rockchip 3288 quad core ARM Cortex A12 / A17 up to 1.8 GHz with Mali-T764 GPU supporting OpenGL ES 1.1/2.0 /3.0, and OpenCL 1.1 System Memory – 2G DDR3 Storage – 16 GB eMMC flash + micro SD slot Video Output HDMI 2.0 up to 3840×[email protected] VGA out (D-SUB connector) Dual MIPI, Dual LVDS and and […] 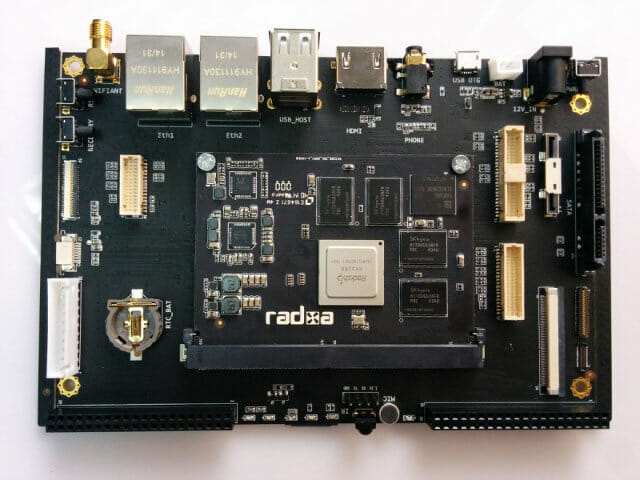 Radxa Rock 2 is an upcoming development board based on Rockchip RK3288 quad core Cortex A12/A17 processor, which will run Android, and I would expect it to have better support for Linux desktop distributions than the original Radxa Rock board thanks to the current work done by Rockchip and Google on Chromium OS, which could bring 2D/3D graphics, and hardware video decoding to the platform. The board is not available for purchase yet, but pictures have been published, and specifications released. So the new board is comprised of a baseboard and a system-on-module (SoM), which should help Radxa’s customers design their own products, while using Radxa SoM, and doing early development on Radxa Rock 2 board. Radxa SoM specifications: SoC – Rockchip RK3288 quad core ARM Cortex-A17 [email protected] with ARM Mali-T764 GPU with support for OpenGL ES1.1/2.0/3.0, OpenCL 1.1, DirectX 11 System memory – 2GB (4GB optional), 64bit [email protected] Storage […] 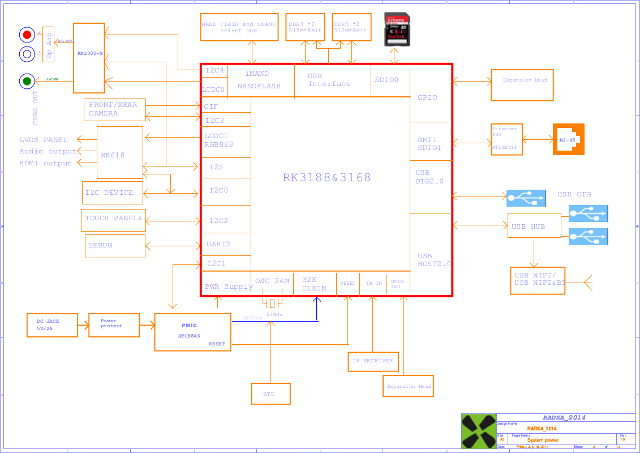 Many projects claim to be “open source hardware” (OSHW) after they’ve released the schematics in PDF format, and source code. But the definition of OSHW has a few more requirements, which is practise means you’ve got to release schematics and PCB layout in the native format, not only in PDF, as well as the gerber files, and the bills of materials. Open Source Hardware can also truly be useful, if you can source the components. and for example, Broadcom BCM2835 processor might be impossible to procure, especially in small quantities, and that makes the Raspberry Pi unsuitable as an open source hardware platform. Existing companies / associations dedicated to OSHW include Arduino, Beagleboard.org, Olimex, etc.., and today Radxa has joined the club by releasing all hardware designs files for Rockchip RK3188 based Radxa Rock Pro and Lite development boards (2014 version) under a Creative Commons Attribution 4.0 International License. This […] 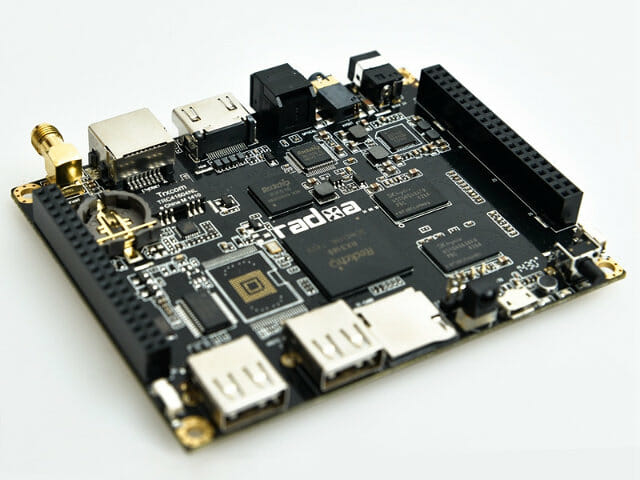 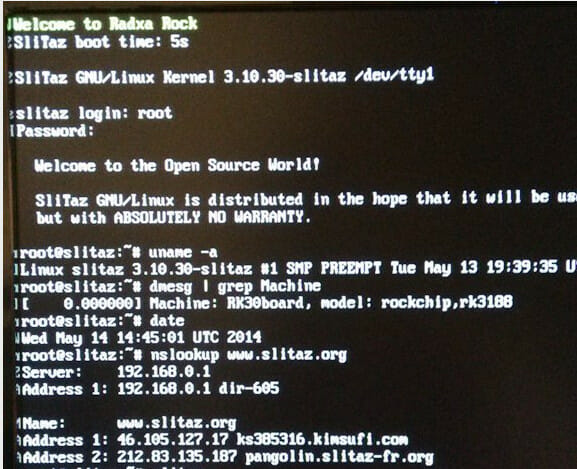 Various Android and Linux images are available on Radxa Rock download page, but if you’d like to get newer images or other options, two developers have provided binaries and posted instructions to get Ubuntu 14.04 and Slitaz operating systems, the later currently booting with Linux kernel 3.10. Naoki FUKAUMI has published a miniroot how-to install a Ubuntu 14.04 Core (minimal headless installation) on Radxa Rock and Radxa Rock Lite. Installation should be relatively easy as he provide the update.img for both board so your can use the usual method in Windows (RkBatchTool) or upgrade_tool in Linux. If you don’t have serial console, you’ll have need to flash the parameter file requiring RkAndroidTool in Windows, and the same upgrade_tool in Linux. If once the installation and configuration is complete, you want a desktop environment,you can always run “apt-get install lubuntu-desktop” to install LXDE. SliTaz is a lightweight Linux distribution. I previously […]

I’ve had countless and recurrent crashes caused by Adobe flash plugin either in Firefox and Chromium, mainly while playing videos from YouTube or other online video services that still mostly use flash, instead of HTML5. Adobe flash death is certain, but up to now it has been soooo slow, so I doubt that thing will truly die any time soon, and unfortunately it will probably be with us for many years to come. To work around the issue, I started by enabling Youtube HTML5 player, and try to play embedded videos inside YouTube instead of the orignal website. I still had crashes from time to time, and this method did not help with other video services. So I decided to check out what I could do to fix the issue. When you go to http://www.adobe.com/software/flash/about/ you can check your flash version, and Adobe will also list the player version for […] 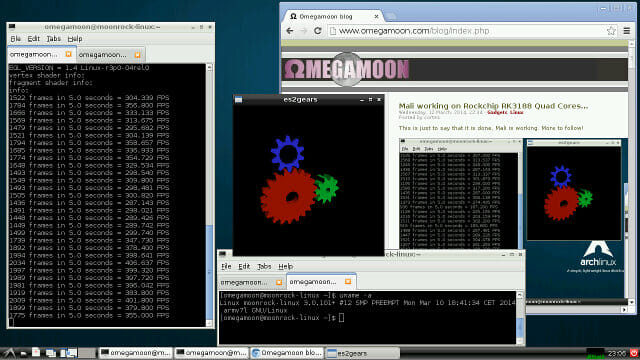 Accelerated 3D graphics in Linux with Mali-400 via OpenGL ES has been possible for nearly a year on RK3066 devices,  but there was no such support for RK3188. This week however, both Naoki FUKAUMI and omegamoon have reported OpenGL ES to work in in their respective RK3188 devices. I don’t know which device omegamoon used, but Naoki did so in Radxa Rock, and even posted instructions to build it yourself. They’ve mostly followed the work done by olegk0 for Rockchip, and Mali drivers build instructions provided in linux-sunxi community, and it can be summarize in 3 main steps: Cross-compile drm.ko, mali_drm.ko, ump.ko, mali.ko in a Linux machine Copy and load the four modules to your RK3188 based board or device. Install dependencies and binary Mali drivers from sunxi-linux in your Rockchip device Once this is done you can try some OpenGL ES demos such as esgears2 or glmark2-es to test […]